At ELTjam HQ, we talk a lot about working effectively, time management and productivity tools. We like to practise what we preach, and all of us have our own tools and methods for working smarter not harder. So when I set the team homework to write a collaborative post about what they use, the first thing I did was start a Google doc. Here’s what they came up with.

(Tim uses so many tools, the only way he could possibly have had time to write them all down is by being super productive! – Ed)

Wrike is the backbone for task management at ELTjam. Every action point from meetings or project discussions is captured in here. Everything *should* be assigned a completion date and task owner. It also allows you to assign priorities for tasks so they stand out. I make use of the dashboard view that allows me to view a selection of tasks based on a certain filters. I like to keep an eye on tasks across my financial and project streams that are due today, as well as an eye on any tasks that are overdue and either need rescheduling, backlogging, or killing altogether.

I’ve developed the habit of spending a bit of time in the morning revisiting my task list and assigning priorities for the day. I then make sure my Google calendar reflects the time I want to assign to each of those tasks.

I love the Inbox Zero approach to emails. It involves determining whether the work required to respond to the email is going to take more or less than two mins. If it’s going to take less, just crack on and do it. If it’s looking like a more sizeable task, star it and come back to it when there’s more time (I like to schedule a block of time in the day to deal with these emails rather than being diverted from a particular task I’m working on). I even have my email set up with Wrike integration so I can create a task ticket straight from my inbox, assign a date to complete it and then get the actual email out of my inbox.

I can’t speak highly enough of the keyboard shortcuts available to you if you’re a gmail user in Chrome. With these enabled you’re able to power through your inbox in no time; archiving, starring and assigning emails like a demon.

I love using the SIRI reminder function on my iPhone, especially when I’m out and about and a thought strikes that I need to take care of once I’m at my desk. Using the geolocation feature I can ask to be reminded to take care of a task once I’m at the office, leaving the office or wherever. e.g. ‘Remind me to pick up a book of stamps when I get to the office’, and other similarly rock and roll to-dos.

I know myself pretty well and I know that, at some point, I’m going to be distracted by a) rock and roll documentaries on YouTube, b) Facebook or c) trawling eBay for guitars. I figured it’s much healthier to *make sure* I do one of those things in the day as a deliberate break from my project work than to fight against the urge. It means I break up the day with some (even more) fun stuff and I don’t feel SO bad about spending a little bit of time surfing Paul Is Dead conspiracy videos.

Not sure if it’s a bit old-hat now, but I love Trello. Such an effective way to keep track of projects  – especially where there are well-defined stages and multiple parts. It’s really intuitive so you don’t need to be a master of all things Lean to get it — it just makes the state of play really visible (so you don’t need to spend hours of a catch-up meeting explaining where everything’s at while everyone loses the will to live).

Toggl is a tool that we’ve been using at ELTjam since we first started. It’s a web and mobile app that allows you to track the time you spend on tasks and categorise them by project and client. At first, it was just a way for us to monitor how long we were spending on things. For example, I discovered that I was spending the equivalent of a full working day per week on email. When you see it written down like that it, it makes you realise how much time that is. I’ve now managed to get it down to 2–3 hours per week.

We now use Toggl to track time on tasks across the whole company, which allows us to see how long we’re spending on projects and compare that with the estimated time. It also allows us to monitor freelance costs, which is essential for us. At first, I was worried that freelancers wouldn’t like using the app, but most absolutely love it because it does away with spreadsheets, notepads or whatever else people were using before. And at the end of the month, when it’s time to tot up your hours and send your invoice, you’ve got everything right there for you in a report.

I use most of the same digital tools as everyone else at ELTjam (Trello, Wrike, Toggl etc.) and use the same Inbox Zero approach as Tim for keeping email under control pretty easily. I love stationery, though. I always make notes in an actual paper notebook in meetings etc. I rarely refer back to them afterwards — but every now and then I’m so glad I’ve got them. I disapprove of having laptops open during meetings (although I’m very guilty of doing so), since it’s so easy to get distracted (‘I’ll just quickly check my email…’). 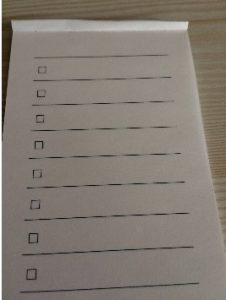 and this weekly planner:

For the product development we do, we have a Trello board to keep track of the higher level priorities for the month ahead. We set it up with these columns:

This captures the high level objectives for the time period, and then the individual projects and products are managed with either their own Trello board, or through task management in Wrike.

One thing that we’re experimenting with is the assigning of some sort of value to the things that we are working on that month. The idea being that at the end of the month we get more visibility on productivity in that timeframe rather than measuring it simply in number of Trello cards moved to ‘Done’. Some cards may only be a fraction of the effort and complexity of others and so we wanted some way to track this. According to the logic of Story Points, tracking this workload in time (weeks, days, hours etc.) is inaccurate and fraught with potential issues: nobody works at the same rate, people have different strengths and weaknesses, unexpected issues arise etc.

Better instead to assign a score based, broadly speaking, on how hard the task/project is according to a range of factors. This score is based on things such as how complex the work is, how much effort needs to be put in, the number of unknowns, and to what degree we are at mercy to external factors. A team will come to have their own specific range that is completely different from that of another team (one company’s 8 is another’s 21 – but points are generally assigned along the Fibonacci series); the number is relevant only to your group, and accurate only in relation to the other projects and products that your team are working on. This means that at the end of a sprint, or a month, or whatever time period you work to, you are able to add up the points achieved that month. This can be tracked over time and allows you to get visibility on how you are working as a team. As I mentioned, this is new to us, so we’re unable to verify what happens over time, but the idea is that as teams get better at working together, they get better at estimating points, and work more productively together too.

What with all these tools, one thing that we’ve actually found quite challenging is switching between Trello and Wrike for task management, so for a couple of projects recently I’ve experimented with running the whole thing through Trello. This involves following some key principles:

Keeping all the tasks in one place does have its advantages and helps give an overview of where we are at any given point.

And I too love Inbox Zero. I was doing it wrong for ages, thinking it related to unread emails being at zero, but now I do it properly, and my relationship with email is much healthier!

4 thoughts on “Working smarter, not harder: tools for productivity”