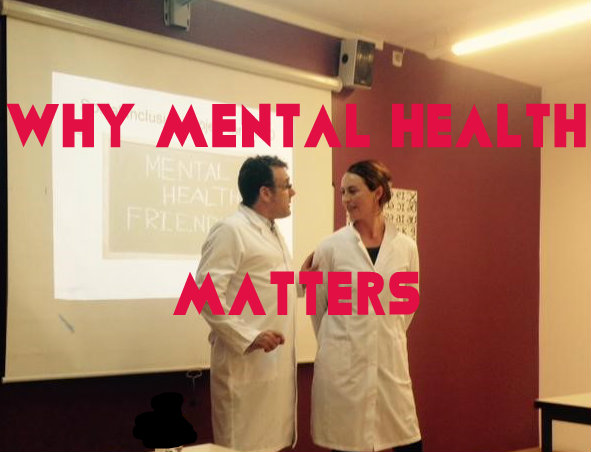 Another post sparked by an Innovate ELT talk, this time given by Fiona Oates and Andrew Dodd, about their Mental Health Friendly initiative – the result of conversations between the two Barcelona-based English teachers. Fiona tell us how they got started and more about the project.

I studied psychiatric nursing and most recently worked as a community psychiatric nurse in the borough of Victoria, before moving to Barcelona to become an English teacher. Andrew, who has a background in working with groups of vulnerable people in London, moved here and became an English teacher and, later, a teacher trainer. We met while working at La Escuela Oficial, Drassanes in 2013, where we discovered a mutual interest in mental health.

We initially talked about the idea of setting up a commercial venture, but soon discovered a shared interest in, and passion for, tackling problems of social exclusion, and thus embarked on a social development project to promote greater access to quality English Language Training for people recovering from serious mental health problems.

The basic premise of the project is that we need to begin to talk about mental health and find solutions to the enormous social exclusion people with mental health problems experience. The World Health Organisation figures state that 1 in 4 people will experience a mental health problem at some point in their life that they seek advice or treatment for. Mental health affects all of us, either directly or indirectly. It is our collective responsibility as a community to support and help those who find it more difficult to be included by society. So we must begin the conversation, as difficult or uncomfortable as that might be.

And what could be more inclusive in Barcelona than learning English?

Everyone in in this city studies English, and increasingly needs to do so, in order to forge ahead in the world of work. So when you take a group of already disenfranchised people who experience stigma on a daily basis because of their illness, and take into account that amongst this group of people unemployment rates run at 90 to 95% across Europe, it makes even more sense that English is so important.

Armed with our passion to bring about significant change, we began making connections in the mental health field. After a very successful meeting with the psychiatry and psychology team at a mental health day centre (a centre aimed at reintroducing mental health service users back into the wider community after a period of rehabilitation), we began giving weekly English workshops on a volunteer basis. What struck us both immediately was the overlap between ELT techniques and approaches and the Cognitive Remediation Therapy programme already up and running at the centre.

Cognitive Remediation Therapy (CRT), also called cognitive enhancement therapy (CET), is designed to improve neurocognitive abilities such as attention, working memory, cognitive flexibility and planning, and executive functioning which leads to improved social functioning. There were so many similarities between the objectives of CRT and the objectives of learning English that it became impossible to ignore. Moreover, it was a psychologist at the centre who pointed out that while CRT is focussed on the illness and the process of recovery, English classes are focussed on acquiring a new skill and hope for the future – an essential component for the therapy’s success. A subjective sense of improvement is key to a positive outcome for the user. It also gives the user an opportunity to practise any new skills learnt in therapy sessions in another context, as per the recovery model.

The recovery model (or recovery approach) to mental disorder or substance dependence emphasises and supports a person’s potential for recovery. Recovery is generally seen in this approach as a personal journey rather than a set outcome, and one that may involve developing hope, a secure base and sense of self, supportive relationships, empowerment, social inclusion, coping skills and meaning.

Clearly, the work could not remain solely within the mental health services. As specialised as the workshops are, we were determined not to let them become a kind of ‘ghettoised’ activity in which the service users do activities in their mental health day centre away from the wider community, so the work within the ELT community began. Initially, raising awareness was key: talking to institutions, academies, publishers and local mental health services. La Federacion de Salut Mental de Catalunya were quick to offer support in this area and have given much weight to the initiative and provided it with vital assistance and technical support. Oxford House were keen to collaborate in this new and exciting area of language training and Macmillan publishers were also very interested due to their groundbreaking Life Skills series.

The idea of developing a stamp, a seal of approval, for academies that are supportive and proactive in integrating the needs of students recovering from mental health problems in the classroom was conceived, and so then was the need to start the awareness-raising stage of the project with teachers.

With this in mind, the Mental Health Friendly competition was set up. This competition was open to all English teachers based in Barcelona and the task was to design a 45 minute lesson plan for adults to talk about mental health in a positive way and to highlight the strengths, rather than the weaknesses, of a person who experiences, or has experienced, a mental health problem.

It is worth mentioning here that the average age at which a person develops a severe and enduring mental health problem is between 18 and 25 years old, the age at which we are generally involved in study and so a crucial time of our lives. If the individual who develops a mental health illness is not supported or encouraged to continue with their studies and does not get that all-important first job, the results can last a lifetime. This project is about helping people open doors to a better and brighter future.

Take a look at their blog for updates on their progress and other issues and innovations surrounding mental health and ELT.