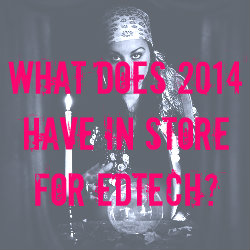 What Does 2014 Have in Store For EdTech?

After brushing off the mince pie crumbs from our shirt front and pasting the final scrape of mustard across the last of the turkey leftovers, it’s time for eltjam to gaze blinkingly at the horizon in an attempt to predict what EdTech trends are going to shape the course of 2014. Here’s what we think is going to make a few waves in the coming year:

It’s an eltjam favourite since we blogged about it back in June, but we think this tech is seriously worth keeping an eye on. AR has gained considerable traction as a futuristic, alternative (dare we say ‘gimmicky’?) medium for marketing and advertising, but we think this tech is going to develop its appeal and reach into the world of education with stunning effect. With the imminent launch and (r)evolutionary impact of Google Glass, as well as the ascension of AR building software (check out Blippar‘s Blippbuilder, for example) it’s only a matter of time before the rich opportunities that AR content generate are applied to learning. Ambarish Mitra, CEO of Blippar, has some fascinating things to say about the 4D applications of AR tech. Imagine being a learner making good use of some of those.

With the long-awaited launches of Apple’s iWatch and Google Glass in 2014, plus Samsung’s smartwatch in its Galaxy Gear suite, the way we interact with our devices is set to undergo another paradigm shift. Although the applications that are being developed for this new wave of tech may not necessarily be world-changing, the adoption and integration of wearable tech will undoubtedly impact the way social and personal information is curated and exchanged. Tech will no longer be a tool that can be applied to a myriad of scenarios, but it will become a powerful medium for collating and expressing information generated by both our physical and online selves, each of which will become increasingly indistinguishable from the other.

3. The Evolution of the Social Learner

The rich and versatile array of collaboration tools freely available online will feature prominently in the evolution of learner-driven language learning. With ELT (and other ‘real world’) content being readily available, learners are able to make increasing use of online tools to create self-organising networks. Carrying on the levelling impact of the MOOC format, learners will take ownership of their own learning needs and requirements and will bypass formal institutions and prearranged courses altogether. Learning interactions will become personalised and community-driven and content will increasingly be created, shared and promoted by the learning community itself rather than publishers.

This is another eltjam soft spot, especially after Dave Dodgson’s fantastic series on GBL that we posted last month, as well as our on-going observation of GlassLab’s SimCityEDU initiative. We predict that there will be an increase in the use of pre-existing video games as texts from which learning opportunities can be extracted and explored. Video games will be analysed for their learning content at a granular level and courses (most likely created collaboratively) will start to appear to appeal to the gamer-learner. We blogged about Playforce back in June which is an Institute of Play initiative that is already making serious waves in this area, but we think that games will become a much more ‘mainstream’ learning opportunity.

5. The Evolution of the MOOC

The early promise of the MOOCs (Coursera, Udacity, edX et al) was that they would open up and democratise higher education. Or that they were a neoliberal plot to privatise higher education. You decide. Anyway, when going to university can result in mortgage-size debts and still-limited job opportunities, the attraction of a free online course from a top university is pretty clear. However, in the second half of 2013, we saw the MOOC backlash take off. Student dropout rates are huge, the quality of the courses and platforms can be poor, and they generally don’t result in any kind of qualification. However, the concept of free or very low cost online learning isn’t going to go away, and 2014 will see the concept maturing. Better courses, better platforms, MOOCs leading to actual degree credits (check out MOOC2Degree, for example). The existing MOOCs will change, and new ones will appear. Sebastian Thrun, founder of edX, decided on a change of course for Udacity a few weeks ago, moving the company from higher education to corporate training. The only safe prediction we can make is that this time next year, more people than now will be learning online rather than going to bricks and mortar institutions.

Adaptive learning was perhaps the hottest buzzword of 2013 within the walls of ELT publishing companies, and that means we’re all going to be hearing a lot more about it during 2014. Macmillan and Cambridge University Press have already partnered with Knewton with the aim of developing adaptive online ELT products. Nothing from them is due to see the light of day until 2015, so we’ll have to wait and see what they come up with. We expect to see more ELT publishers and course providers looking to develop adaptive learning offerings. We hope to see some small-scale experimental adaptive ELT products appearing during the year ahead, maybe from outside of the big ELT publishers. The publishers will be tempted to add an adapative element to their existing blockbuster courses. Retrofitting adaptive learning to an existing course is a big challenge, though. Creating something from scratch, designed around the adaptive technology is definitely the way to go. We expect to see both approaches tried out over the next couple of years. The other big challenge is how well an automated system will really be able to cope with the complexities of language learning. We think the first and most effective adaptive products in ELT could (should?) be focussed on areas that are easier to pin down – grammar, vocab, and maybe exam prep. Perhaps the most interesting thing we’ll learn over the next year is whether adaptive learning is something that teachers and students actually want. Or is it a case of “build it and they will come” ?

Adaptive learning offers up exciting possibilities for personalised learning and a more efficient way for students to achieve their learning objectives. However, as the buzz around it continues to grow during the year ahead, controversy will never be far away…

EdTech is red hot at the moment. Huge amounts of money are being invested, and big promises are being made about the coming end of a ‘factory model’ of education that has supposedly remained unchanged since Victorian times. When big money is involved, and current orthodoxies and practices are being trashed, things will get heated. Is the fact that technology and ‘big data’ companies are moving into education really the dawn of an Orwellian nightmare where everything about us is monitored and predicted by corporations and governments? The recent activities of the American and British security agencies won’t have done a huge amount to allay those concerns.

In 2014, we will hear the following arguments often:

So there we go… seven eltjam predictions and expectations for the coming year. All that’s left to say is that we hope that 2014 is a rich and wonderful year for your good selves.