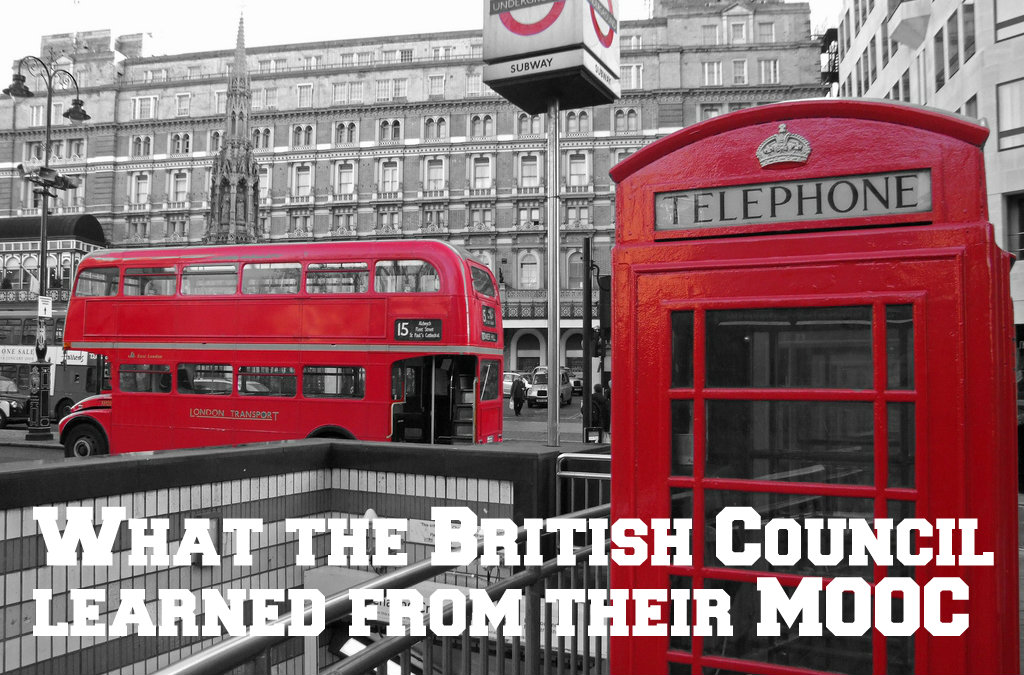 What did the British Council learn from the Exploring English: Language and Culture MOOC?

In today’s post, Chris Cavey shares his experience of working on the British Council’s flagship MOOC.

In the weeks since the British Council’s first MOOC ended, I’ve been asking myself what exactly we’ve learned from it. Did it ‘work’, as Nicola asked? My feeling is that it did – not only in terms of the numbers of learners it attracted but in what it achieved within the parameters we set for it. If it wasn’t the ‘true ELT MOOC’ Nicola described, that’s because we didn’t plan for it to be that.

As a first step for the British Council into the MOOCosphere, Exploring English: Language and Culture was in many ways an experiment into MOOCs and their capabilities. But what it confirmed for us is that there is a tremendous interest in UK culture, especially when it is related to local culture and experience. On the language-learning side, we also confirmed that there is a massive appetite for English practice, but that MOOCs may be better suited to encouraging semi-structured language practice through writing in a social media space than ‘heavy-duty’ language learning activities. At the moment the platform is quite limited in the types of activities that can be used to practise language, so we feel that our decision to focus on the discussion and comments areas was a success.

For those of you who are interested in data, here is a selection of the key statistics from the course:

* This figure is lower than average, which might have been caused by the interface: to complete a step, learners have to click on a button towards the bottom of the page labelled ‘Mark as complete’, which then changes from pink to blue. Perhaps a change of wording to make it more easily understood (‘I’ve finished this page’, perhaps) would affect this figure.

Although the survey did not differentiate between students and teachers when it asked about current area of employment, teachers were certainly very well represented in the comments. Might this explain the large number of women taking the course?

The video content at the core of the course was originally made as part of the GREAT campaign (‘showcasing the best of what Britain has to offer’) rather than specifically for the MOOC. We realised we had a source of rich, largely unscripted video content in areas likely to generate discussion. And, of course, it meant we were able to deliver quickly and more economically than if we had been starting from scratch.

Each of the six course weeks followed the same basic structure:

We’d like you now to share your ideas about the British countryside. These ideas might be from your own experience if you have visited Britain, or they might be your ideas and impressions of the countryside and the climate from things you have read or seen. Share your thoughts with other learners.

The response in these discussions completely outstripped our expectations. In the introductory week, learners explained why they had joined the course. A far from atypical answer was:

Hi, I’m _____ and I’m from Brazil. I’m a English student and I love British culture and “accent”. the dream of my life is to visit the UK one day and this course will help me to increase my knowledge about the English language and culture.

A search for the string ‘British culture, especially’ brings up:

… I want to find out more about British culture, especially about music, art and food’ (Vietnam)

I am fascinated by British culture, especially humor’ (Croatia)

The list goes on: people are also especially interested in ’literature and history’, ‘English humour’, ’Monty Python’, ’art and design’ …

Someone being especially interested in British food? Astonishing!  While Nicola asked whether this enthusiasm for all things British has implications for coursebooks, I see it as evidence that, as also previously noted, MOOCs will work best where they deal with  topics of interest in English rather than English itself. Learners floated several ideas for future MOOCs, including British sitcoms, Downton Abbey and the works of JK Rowling. If you can get the rights to those, the audience is there!

3 Not everyone enjoys speaking English.

In the first week of the course, we asked learners to share their thoughts on these questions:

This was the most popular discussion on the course, with over 30,000 responses. A search for ‘When I speak English, I feel’ gives an intriguing list of adjectives: afraid, amazing, anxious, awesome, awkward, better, blocked, comfortable, completely free, confused, connected, different, elegant, embarrassed … the list goes on and on.

Remember that these are not beginners but people with at least B1 English. It’s interesting the number of people who speak of their discomfort or ambivalence about speaking English. The most ‘liked’ comment on the course was ‘When I speak English I feel myself as a dog: Understand everything, but say nothing’.

As someone who feels more comfortable expressing myself in writing, and has regularly felt the hot flush of panic at the most minor transactions in other languages, the following comment struck a chord with me:

I feel uncomfortable, I have a lot of grammar and lexical doubts. For this reason I don’t like speaking, even thought I love this language and I try to improve it. It’s very difficult to express an opinion in English compared to my mother tongue, because the expression, the words have different degree or nuance.

Commenters on previous posts have noted that expressing feelings through a keyboard is an entirely authentic task these days. I notice this morning there are still people commenting on the course, although the moderators are gone and there’s very little activity. Perhaps the MOOC provides a safe space for people who are happier communicating this way.

4 The MOOC is a social space

Commenters on the previous MOOC posts speculated that MOOCs would be most successful where they take on social learning elements. So how far did this happen on Exploring English: Language and Culture?

There was certainly much evidence of social interaction between learners – particularly in the weeks covering music and literature. It’s hard to give a flavour of these conversations without including long extracts, but here are a few summaries from the music week:

The statistics showing time spent on each step of the course suggest that learners did spend more time on the discussion steps than other activities and my feeling is that learner comments became part of the content – something for others users to measure themselves against as well as comment on.

There was evidence, too, of learners correcting and advising each other. Our six moderators, faced with more than 60,000 comments in the first four days of the course, did their best to deal with questions, but it was always an uphill task and it was gratifying to see learners answering each other’s questions. For learners with Facebook accounts we offered three Facebook clinics during the six weeks where they could come and ask language questions to the moderators. These clinics were well attended and well received.

If Exploring English: Language and Culture answered some questions, others remain unresolved, including Nick’s original question:  What would the ‘true’ ELT MOOC look like?

As Nicola correctly pointed out, the title, Exploring English: Language and Culture, was not an accident. As I said in a blog for FutureLearn before the start of the course, ‘The aim of the course is to help people develop their understanding of culture in the UK and improve their language skills in the process’. I’d say we largely managed that, and we did so by choosing a topic with a broad appeal to so many learners and offering them an authentic exchange with thousands of other learners.  I’ll leave the last word to a learner from the Middle East who posted in a Facebook clinic:

Thank you so much. It is amazing and just changed my view to the life again. I come back to the music, literature and nature after many years again. I remembered my past, a nice part of my past.

Chris Cavey is a Product Development Consultant for the British Council.