Velawoods English is an immersive, self-study English course that, according to its website, “offers the next best thing to living in an English speaking country”. The product is the result of a collaboration between Velawoods Learning Ltd., Cambridge University Press and Cambridge Assessment. We spoke to the Managing Director of Velawoods Learning Ltd., Hani Malouf, and CUP’s Publisher for Consumer, Keith Sands, to hear more about the vision behind the product and their experience of putting it together.

So, what’s the product?

Keith: It’s an immersive, first-person game-like environment whereby the learner interacts with characters through a series of real-world scenarios. New language is encountered through overheard conversations, formally presented in tutor sequences, and practiced in activities and conversations involving the cast of Velawoods.

The course is based on the face2face syllabus, although the concept is dramatically different. There are 60–70 hours of learning material at Beginner level, and even more at Elementary. Each lesson is structured around a set of tasks, each of which has up to 20 activities as well as testing and practice material. 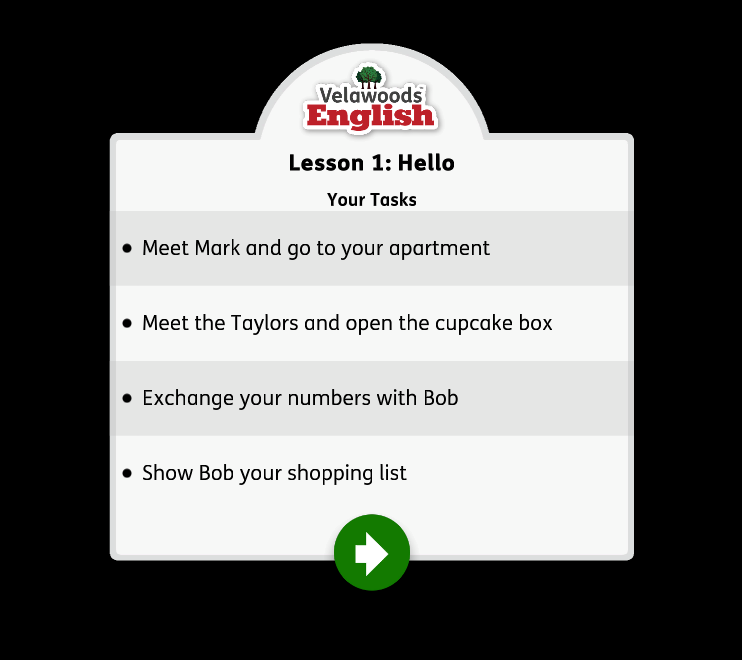 Keith: Yes. It’s a vital element of the product. We’re using Carnegie’s speech analysis. When we tried it at a private language school it worked quite well.  When we were demonstrating it to people there and somebody was struggling to get the speech recognition to pick up what they were saying,  they would keep doing it.  They didn’t want to click ‘Next’ and just move on. They would keep listening to the model, replay it, then replay their own speech until they got it right. So, it does have that loop where you really want to progress through the conversation, you really want to get it right. 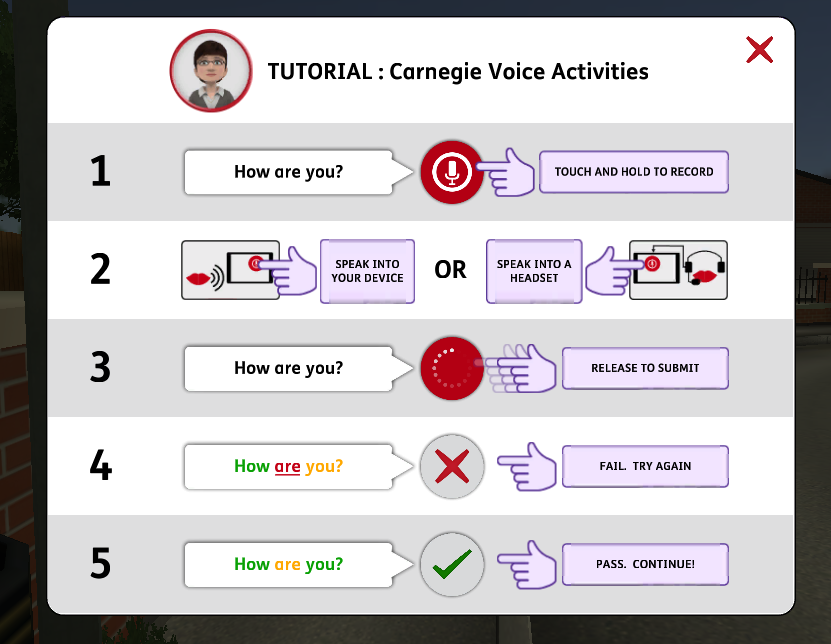 What was the vision behind the product?

That’s what we wanted to really embed in the feel of the product. The learner (hopefully) enjoys doing different tasks, but at the same time there is also a story, a sequence.  They’re not seeing random characters in random situations, but instead they get to meet those characters in unfolding scenarios and, as they do, they get to learn about them. Learners spend time interacting with all the characters in a given task and then, when they’re finished, they’re eager to see what happens next. We tried to do that as much as possible; to craft a  compelling narrative sequence from one lesson to the other. The biggest challenge was trying to create a story that links all of the learning objectives into a learning sequence that is interesting and engaging. 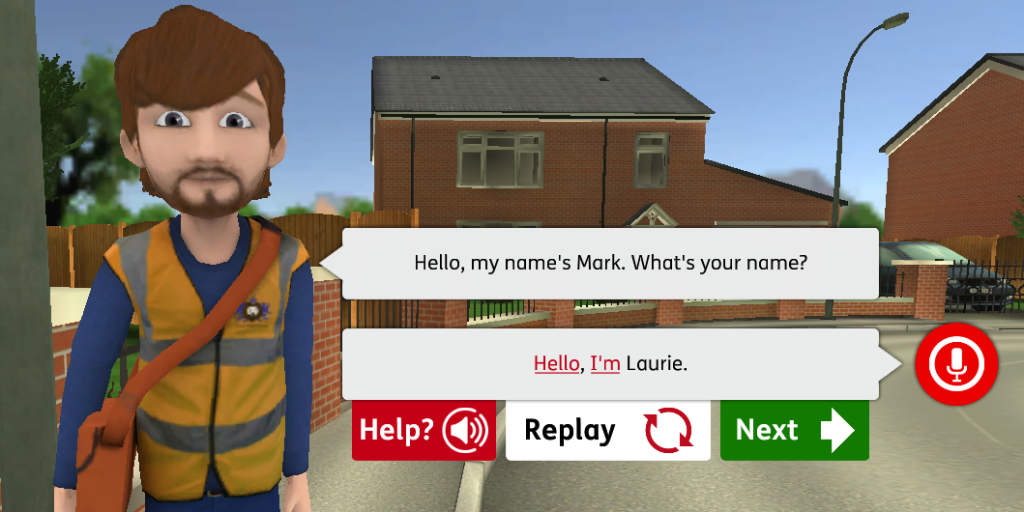 For example, you have business meetings which we feel will give the learner the experience of living in a country that speaks English. You’re still following a syllabus that comes from Cambridge but you’re doing it in a more immersive way.

This is self-study product, and we know a major problem associated with self-study tools is that people feel lonely. They feel disengaged because they’re on their own. So, to address that, we wanted to have in-game characters and interactions that learners would actually grow to like. We didn’t want to it to just be about going to back to a lesson because it’s fun and interactive. We want learners to go back because of Amy and Bob and all the other characters, and to do stuff with them.

Some of them are your neighbours and you get to know them. We’re hoping that slight attachment will help to bring the learners back to the lessons and to get them more engaged. 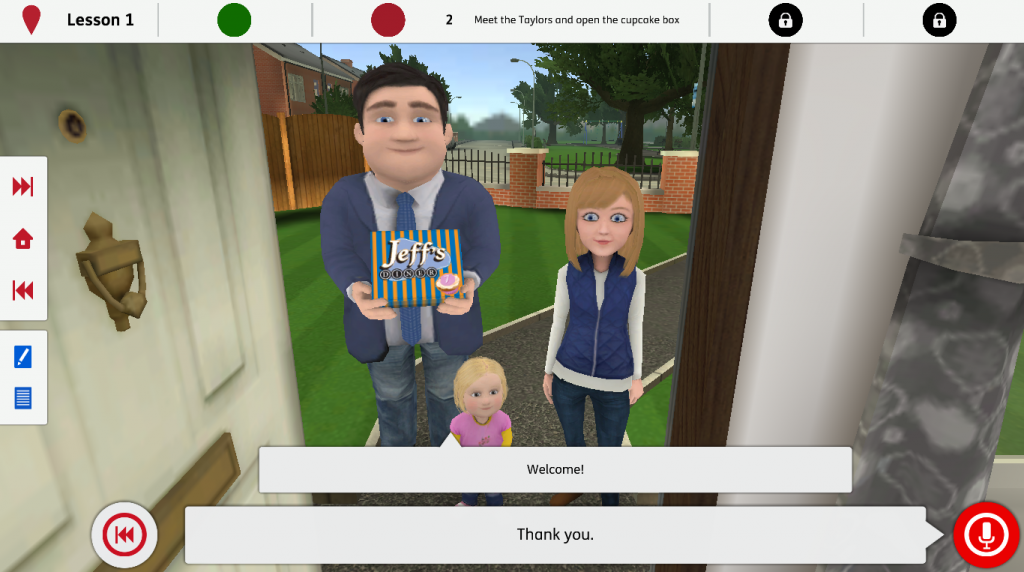 It comes with Cambridge Assessment certification, doesn’t it?

Hani: Yes, but we’re keen to make the distinction that this is a certificate for completing the course. It doesn’t represent a qualification, because we still want people to go and do the actual paper test. At the end of the day, we can’t guarantee that the student completing this course is the same one that signed up. We’re assuming that the majority of learners will be honest, however, so they get a hard-earned certificate of completion at the end.

Keith: There’s a certain amount of randomization for the tests and questions, so you’re not going to get the same test twice. 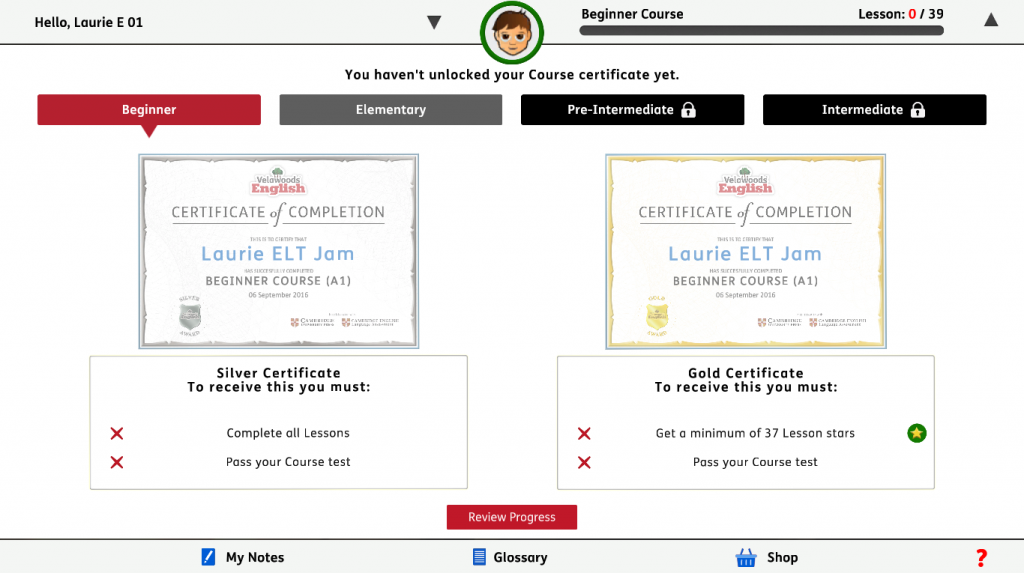 How was the experience of developing the product?

Keith: Although it’s not actually a game, it’s built by a games developer (Route 1 Games in Sheffield), which has been an interesting experience for the product team and very different to working with a big platform developer.

Hani: In fact, it was a learning curve for both of us, because for them it was the first time they had got involved with an education product and for us the first time working with something that has quite a different product team setup.

There was a nice balance between us approaching it from a learning design point of view and the game developers saying, ‘Okay, this is how a gamer would experience or engage with it’. For example, the speech analysis and the camera positions, and those kind of things.

We didn’t want it to be labeled a game that you ‘play’ because of the education specification. You don’t have the free will to walk around and do whatever you want as in proper games. With that freedom you lose the structure of the learning, but we wanted to bring an element of autonomy into the product somehow. Ultimately, it’s an English course with a serious purpose, not a game as such.

Keith: What’s been interesting is working out, together with the team of authors and learning designers, to how to structure the content as a learning experience, specifically in terms of how you encounter the language. You encounter language that is explicitly taught and you also get a lot of incidental language, but you’re always encountering it in context. Engineering those conversations when you’re hearing it in context, then focussing on it and then providing an opportunity to use it in that repetitive cycle has been really interesting and different. It’s as you’d expect in a course book, but it comes to life a bit more. The context and immersiveness is key to it. 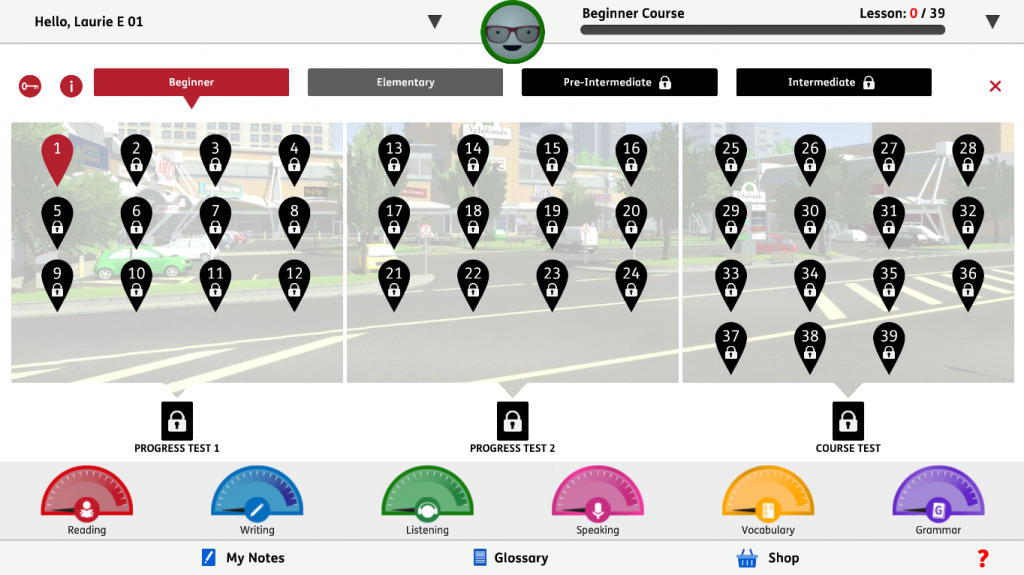 Any surprises along the way?

Hani: We had to evolve the product while it was still very young in response to some market feedback. A lot of the UI changed, the experience was simplified, a lot of things started to get more refined based on the initial feedback we got from learners.

Keith: For example, there was maybe a bit too much going on in the first iteration in terms of user journey, whereas now you can get straight into the environment with one click, and straight into the lesson. One of the main advancements from the first version to the second was the stripping back of some of the features to make a slicker, more concentrated and simplified user experience.

We’re hoping that, even after the latest version gets released, we’ll be able to make more improvements. Ideally, because it’s all such a new experience, people will continue to give us feedback on how to tweak certain things. The platform allows to respond to that feedback and to adapt as necessary, which works quite well.

How is it playing with learners?

Keith: We’re  piloting it at a couple of schools in the Middle East and with self-study learners in Latin America. This will enable us to do a small impact study. We’ll also be looking at student engagement; whether there is any progress between tests, any correlation between performance and how long someone is spending on the platform, that sort of thing.

Hani: With the early adopters, we’ve seen people engaging with the application for up to two hours non-stop.  Once they start, they go from one activity to another. It’s possible to track this user information from our admin side so we can see the sessions.  Just seeing the learners spending over an hour and a half on a couple of activities was just amazing.

Watch this space for ELTjam’s review of Velawoods English. Meanwhile, take a look at some of the other product reviews in our archive.

Learn more about Velawoods English (and try it for free) over on their website.