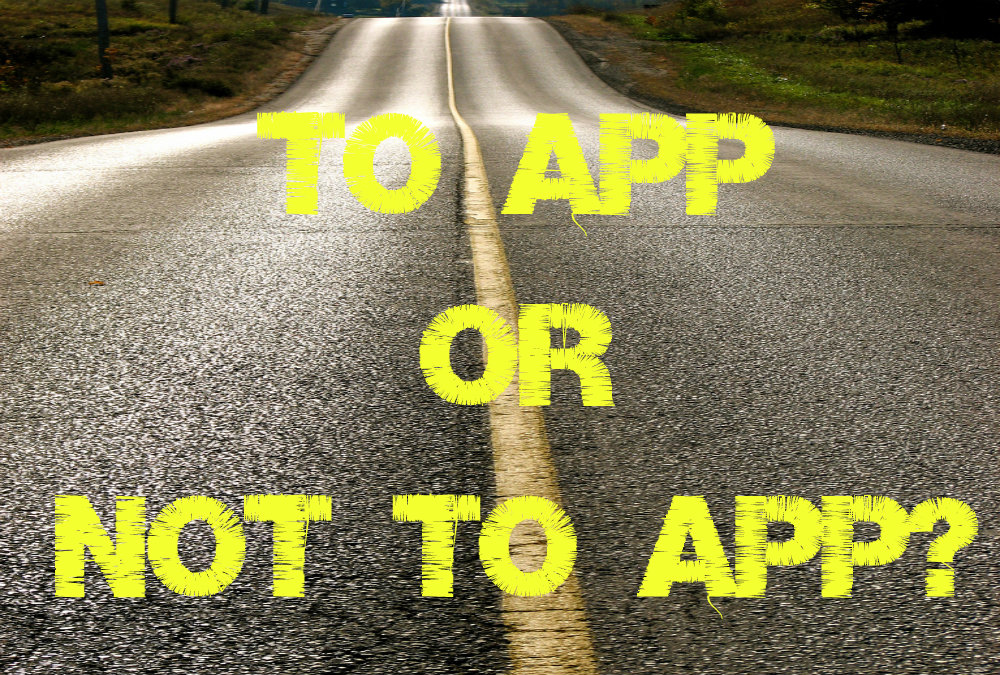 To app or not to app?

Dear ELTjam, I’ve got an idea for a language learning app. It’s about time someone did something innovative and fun that’s also got pedagogical validity. Duolingo is rubbish!

But what is the first step of building an app? Is it sharing a great idea with someone you think has the expertise or resources to make it happen? What’s going to get them on board if it is? Or is it working on the app idea yourself, and if so, how much should you do before approaching someone else? This post should help but, be warned, it sounds like a hard road — because it is!

The first thing to decide is whether you want to make money from your app or not. If it’s just a fun project or a way to learn developing or design skills, then make sure it’s not going to cost you more than you can afford to spend on a hobby or training, and work out what you need to learn to make it happen. However, unless your app is really simple, it’s unlikely that what you can make as a developer-in-training resembles the ELT product you’re envisaging.  The design aspect is a more realistic skill to get to a reasonably product-worthy level though, so this might be where to focus your training.

How do you know you’ve got a good idea or not? Market research. Your app is based on an assumption. e.g. ‘I think group-of-people x want y  in order to z.’  Talk to people on the street. Do they get what you’re doing? Do they think it has potential? You need to test your assumption and the cheapest way of doing that is by talking to people before you spend a penny on it or sink months into the project.

You also need to know what the risks are. Is the risk that nobody will buy it, or that nobody will like it, or that the tech won’t work, or that the idea isn’t compelling enough? For example, people might tell you that they love the idea and they need it but that they wouldn’t pay for it for whatever reason. Or perhaps your idea is just really bad! Don’t be blind to that possibility and don’t be afraid to ‘pivot‘. It may well be that the discussions around Idea 1 lead to a much more compelling Idea 2. Idea 1 almost never works.

If the idea has legs, and you can demonstrate this somehow from your market research, this is a good point to work out what success looks like. Is it 1000 users, or users moving up an IELTS grade or users coming back every day, or people telling their friends about it? If you have a definition of success, you have a way to gauge whether your assumption-based app is worth carrying on with at a fixed point in the future. Without that, you can be at risk of pouring good time and money after bad.

Be clear who your target user is. ‘Anyone learning English’ is not a target market, it’s a painful route to the self-deception that 1 billion people might want your app. Even Google doesn’t have many more than 1 billion users. Narrow it down as much as you can. What value are you adding and to whom? What are those people’s pain points and how do you solve them with this product? What age-group? Which countries? What context are they in? Is it for self-study or use in class, or is your target actually teachers? Is it for people with very little time? Are you aiming for those with very little money, or the rich? Create user profiles so you get to the point where you can describe your typical user as you would a person you know well.

You need to look at the revenue model in conjunction with your target market. Are they going to pay in the model you’ve chosen? Your app might be the best spelling game for Polish under 5s in the app store but, assuming they can’t make in-app purchases, you won’t make any money if that’s your model. Your customer is the parent, not the child, who is just the user. How can you convince the parent to pay for it?

If you don’t plan to make money from your app, steps 1-4 may provide an adequate foundation for working on this particular idea instead of thinking of another. You don’t always always need the revenue plan sorted at the start; you may want to drive user numbers or focus on the data with the expectation of revenue coming later. If you just want to see if you can learn something, maybe even a really basic idea is worth spending time on… However, if you want to make money for all that time and effort, you need to work out a business model that includes looking at where revenue will be generated. Will people pay for your app or are in-app purchases a better bet? If yes, what price? Back to your market research if you don’t know this already. Is there money to be made in carrying ads? Is it a subscription service? Or a combination of more than one of these?

Think about who you need to help you realise your idea. Can you be the developer, designer, content creator, UX designer and marketer all at once? If you think you can, you’re wrong. So, where are you going to find the additional expertise and how much will it cost? Even if you’ve learnt some developing, if you’re really a content creator or a product manager, you’re going to need a coder and a UX designer as a minimum.

People might be willing to come in for equity when an idea is pre-product and pre-revenue… but you have to get people to buy into your vision. Good ideas, which have survived step 2, might inspire people to give you their time, as they will be able to see the app’s potential.

Research other apps on the market that are similar to your idea. If there are some, how is yours better and what will make it stand out? What are the download figures for your competitors? What are the reviews saying? If there isn’t anything, consider the possibility that there’s no market for it. Being first doesn’t mean much if no-one wants it anyway. An app idea that reminds you when it’s time to walk the dog? The dog itself probably performs that function! And if not, there are hundreds of personal organiser apps out there that can remind the forgetful owner it’s time for walkies. Your idea needs to respond to a ‘need’, solve a common problem, fill a gap – do something better, differently, more competitively than similar apps.

Don’t be too quick to dismiss Duolingo. It has 10 million downloads for a reason and Geoff Jordan’s recent review of it suggests it might not be as pedagogically invalid as its detractors like to think. It’s main strength is a great user experience and that might not be immediately obvious to someone who’s not a UX designer. Analyse it to see what factors make it easy and fun to use and aim to include some of them in your app if you want it to be ‘sticky’. Note that a huge reason for its popularity is that it’s free.

Wire-frame your app. This means designing it screen by screen and showing how every part links up. You’ll still not end up with a perfect product but this step will save a lot of time and mistakes during building.

If you’re looking for investment outside of friends and family, you should only make approaches once you’re convinced you have something of value. There might be funding available from the EU or other funded programs. You could consider applying for an accelerator program or approach potential investors or seed funders who invest in ideas right from the beginning. Be prepared to give up a massive chunk of your potential business and take a heart-sinking amount of criticism, and that’s before you’ve even seen any money. It’s unlikely anyone will invest solely in an app… Investors will be much more interested if you can present them with a model for a sustainable business, rather than a one-off product.

If potential investors are reluctant to get involved, listen to their reasons and consider making changes. If they do invest, be very sure you understand the implications (such as your own financial/job security!) if your product is successful.

Now you’ve just got to build it and test it and revisit most of those other stages and iron out the bugs and test it again. And work out your marketing strategy… It’s a difficult journey which needs a careful, realistic development approach, incorporating strategy and flexibility. In short, it’s a tough ride – be absolutely certain of your idea and research, research, research!

Image by qmnonic via Compfight cc Text added by ELTjam.