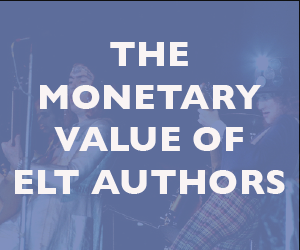 The Monetary Value of ELT Authors

“So here it is Merry Christmas

Look to the future now

Recognise the lyrics? They’re probably engraved on the inside of your head. And they’re reportedly earning Noddy Holder £800,000 a year, even forty years after the song came out. It’s schmaltzy, sentimental, streetwise, and really successful.

Written by mavericks with a sense of humour, it’s now the earworm of Christmas. Here’s the question: do you think it could have been written by a team of publishers?

The answer’s easy: no.

Ask the same question in ELT, and you get a similar reply. If you look at the mould-smashing books, the Streamlines, the Strategies, the Headways, they were all produced by maverick writers who had an idea and dragged the publishers along. There were key publishers who allowed this to happen, notably Susanna Harsanyi at OUP, Gill Negus at Longman, Sue Jones at Macmillan – but the big waves in ELT have, up to now, been created by individual writers.

Publishers have always disliked this – too much money leaving the bottom line – and they instinctively want to control. Writing’s easy – we all write. Why are we paying these popinjays so much cash for a product that anyone could knock out?

The answer’s in Noddy Holder’s song:

“Does your granny always tell ya that the old songs are the best?

Then she’s up and rock ‘n’ rollin’ with the rest.”

Twelve publishers sitting round a table for fifty years wouldn’t come up with this. They haven’t got the street feel, the chutzpah, the joy for life. The Dead Hand of Publishing (DHP) would have strangled this song at birth. This is not going to be a stereotypical rant about publishers. I like publishers.

Some of my best friends are…, well, you know what I mean. They are decent people, personable, intelligent, literate, highly interested in books. But they are having a terrible time at the moment. The move from print to digital involves them being re-chipped or losing their jobs. They are being run from meeting to meeting, force-fed corporate doublespeak, and told to live the new reality, even when all their senses are telling them it’s not real at all.

ELT publishing has always been subject to fashion. I can remember grammar being banned in the classroom, the communicative approach, the arrival of functionalism, notions, the student-centred approach, task-based learning, writing courses based on concordances, CLIL. And now we have digital. ELT publishers, like meerkats, are twitchy animals: they are always watching the opposition. Each time a new fad arrives, there is a Gadarene rush, going through various stages: superficial understanding, fanatic enthusiasm, half-hearted implementation, disillusion. And then the next fad begins.

But this time, we’re told, it’s different. Digital is here and it’s here to stay. The world is changing. We don’t need writers any more, at least old-style writers. Data-inputters writing piece work will do the job just as well. We have the hardware to test students when they start at school, educate them through digital classroom management systems, test them at the end of the course and award them a grade. We don’t need writers (or, by implication, teachers. But that’s a little further down the road).

Publishing, if you’re going to pull the best out of a writer, involves empathy, understanding, sensitivity. We’re not getting a lot of that right now. What we’re hearing at the moment sounds more like Boys With Toys – “We’ve got the hardware. Get off our lawn.”

The current ELT fad is data retrieval and testing. It appears to be male-based, hardware-led, number-worshipping, mechanical. Is it really the end of the world as we know it, or just another fashion? It’s certainly true that the future, say in twenty or fifty years time, will be digital. Cutting down a tree, turning it into pulp, sending it to Hong Kong for printing and then distributing the product on palettes is an inefficient a way of distributing knowledge. Things are going to change, but when? Calling the changeover to be happening now is maybe a little over-optimistic.

The Boys With Toys are really good at Talking the Talk, but do they Walk the Walk? Not even baby footsteps yet. Next time you hear a publisher giving a talk about their digital products, mark it on a score-sheet, with “Promised Delivery” as the column on the left, and “Actual Delivery” as the column on the right. No prizes for guessing where all the crosses will be. And, as an added treat, each time the publisher says “the growth of our digital product has been exponential”, everyone in the room is allowed to shout “Bingo!”.

Where does that leave us as writers? There has been a good deal of heart-searching in the ELT Writers facebook forum, but the mood is becoming more positive. The publishers are being less hardline and are even conceding that there may be a role for writers in the digital future. Those publishers who have advanced along the digital path are looking at holes in their list and wondering how to fill them. It seems that writers have their uses after all.

And what of the digital future? Well, the Boys With Toys have been setting up their hardware and now have gleaming delivery systems all ready to deliver… what? Education is, at root, the communication of one mind with another. In a world where 1.5 billion people are studying English, there’s a lot of competition, and the most interesting products will win. The best mind will communicate with the most people.

It is certainly true that the quantifiable measurement of progress is a satisfying experience for a learner to have, but all digital products will offer this. It doesn’t matter how much the hardware can analyse and retrieve data, if the data itself is so tedious that the learner doesn’t want to spend time absorbing it. Those products that are dull will just disappear. Which explains why the publishers are now starting to sidle up to writers. “Sorry about what we said last year. We didn’t mean it. We want some of your Noddy Holder madness”.

The alternative is for the publishers to generate the product themselves, in a small stuffy room, in the eighteenth meeting of the day, with an A4 page on the wall, “How to get Fun into our product (and we mean Fun with a capital F!)” Boys With Toys meets the Dead Hand of Publishing. Sounds like a horror film. Writers have always had monetary value in ELT, and they continue to do so. It’s difficult, in conversation with publishers, to distinguish what their real concerns are. Maybe they’re worried about copyright issues (which could be fixed if they put their brains to it), or they want to change material quickly in response to the market (which will still need writers) or possibly they just want to massage down the amount of money that is being paid to writers (I wouldn’t be surprised). The writers so far, to their credit, have refused to bend the knee. It will be interesting to see who blinks first.

Finally, will there be a new best-selling smash digital ELT product? Yes, but it won’t be originated by the mainstream publishers. Encyclopaedia Britannica didn’t invent Wikipedia. Yellow Pages didn’t come up with Google. The first best-selling digital ELT smash will be produced by a Zuckerberg, not in a boardroom.

There is a small ELT mammal flexing her fingers over a keyboard somewhere in a classroom, either this year, or the next, or the one after that. She will develop something, probably along the lines of social media, that blows the traditional publishers out of the water, and revolutionizes the way we teach English.

And … guess what? It will have really interesting content.