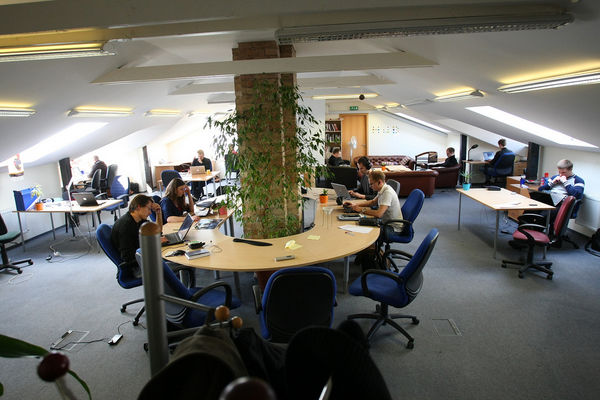 The great EdTech disruption in ELT

If you listen to any EdTech entrepreneur, you’ll notice the frequent and enthusiastic use of the terms disruption or disruptive innovation. To some extent, the whole concept of EdTech is based on the possibilities for disruption engendered by online and mobile tech. The belief is that the “education space” (ugh) is ripe for disruption, and the “factory model” of education we currently impose on our youth is rightly about to be swept away by an EdTech revolution. But what does EdTech disruption mean for ELT?

First of all, what exactly is disruptive innovation?

The concept was popularised in business by Harvard professor Clayton Christensen, and at its most basic level refers to a situation where some kind of technological innovation changes the rules of a business segment. The usual response from those facing such disruption is either to dismiss it because the shiny new thing has some obvious flaws compared what we already know and love, or to find themselves unable to embrace the new because their core customers aren’t interested (yet). How can you divert resources to something new, in some ways inferior, and commercially still small when that would have to be at the expense of fully servicing your existing customer base?

Christensen used the hard disk industry as his main example. Also, the replacement of mechanical diggers with hydraulic ones, and how that didn’t work out so well for the mechanical digger companies who initially dismissed the feeble and expensive hydraulic technology.

But how about some more modern examples? Imagine you’re Nokia, Sony Eriksson or RIM in 2007. Dominant in the mobile phone business. Then Steve Jobs gets on stage and announces the iPhone. At first, it’s easy to point out its inferiorities:

Too expensive!
No 3G!
It’s not so great as an actual phone because Apple don’t really know how to do phones!
Only available on one network!
It doesn’t do as much as the Nokia N95!
People will never get used to the lack of a physical keyboard!

Well, it turned out (pretty quickly) that all of that, while true, didn’t matter anywhere near as much as the things that the iPhone brought to the party:

You can actually use the internet properly!
It’s really cool!
It’s got an iPod built in!
The touch screen is amazing!
The on-screen keyboard isn’t an issue!
It’s basically a really useful little computer that I can keep in my pocket, rather than just a phone!

The fact that Apple “didn’t really know how to do phones” meant they didn’t try and, in the process, rendered all previous smartphones pretty much redundant by changing everyone’s perception of what a phone should be. So what happened to those who dominated the mobile phone industry pre-2007? Nokia is a shadow of its former self; Sony Eriksson’s gone; RIM are in terminal decline; Motorola were bought by Google. The smartphone market – which is now basically the phone market in most of the world – now belongs to Apple and Samsung (who have succeeded by copying Apple).

The iPad was another game changer – maybe even more so. Just ask netbook manufacturers. Or computer manufacturers full stop. Or games developers. Or educational publishers being told that the schools they sell to are going paperless because they’ve invested in iPads for every student – and that’s happening all over the place right now.

Is EdTech an example of disruptive innovation?

Well, I would argue that technology certainly is a disruptive force in education. But in what way, and for better or worse? EdTech fits the bill for disruptive innovation in many ways. The promise is not just that tech will allow students and teachers to do what they always did but in better ways – it’s that tech will actually transform what education is.

But what about ELT?
One of the most common things I’ve heard when people talk about the use of technology in ELT is that we definitely, positively should be aiming to use it as nothing more than a way to enhance what we already do. I think this line is taken in ELT partly to avoid frightening teachers (but isn’t that patronising?). But the orthodoxy in ELT is generally that we don’t want to see any significant change in how English is learned or taught, since we already know best thank you very much, so anything that threatens to fundamentally change that must be suspect. And there’s some truth in that, of course – if I compare how I was taught French at school with the quality of materials and teaching that can be found in the ELT world, then clearly a lot of people are doing something right. The EdTech agenda holds no truck with that, though – if you’re an EdTech evangelist, then education as we know it is fundamentally broken. And the people to fix it are 20-something tech guys with beards, riding their fixies to loft offices in San Francisco, East London or Berlin. Or Bill Gates.

This is both exciting and disturbing at the same time, surely? Most EdTech people know a lot more about the Tech than the Ed. That certainly means they can bring a fresh approach. But, of course, it also means the good things that happen in education are at risk of being forgotten. Baby, bathwater etc. Some of the things that are currently generating the most excitement in EdTech are pretty regressive from a pedagogical point of view. MOOCs are surely a good example of this – are we really going to transform the nature of education for the better by having students watch videos of lectures online and maybe get a few multiple-choice questions if they’re lucky? Maybe I’m being harsh on type of learning facilitated by most MOOCs, but that’s what I’ve seen. Nick’s recent post on MOOCs kicked off plenty of debate about the scope for MOOCs in ELT, and the consensus seemed to be that there’s no way the current MOOC model can effectively teach a language (aspects of a language, sure, but not the whole shebang). There is some great stuff being done as part of the EdTech movement, but (as I think our “Hugh’s Reviews” series from Hugh Dellar is demonstrating), there’s a lot of over-hyped rubbish out there, too – products where the tech is impressive, but which are incredibly basic or even totally useless as language learning tools.

So, how should ELT respond?

I suspect most ELT people looking at a lot of these EdTech products would agree that there are a lot of language learning tools out there which get attention simply because they’re using technology in interesting ways. But, is the ELT industry falling into the trap of thinking like Nokia et al did in 2007? ELT needs to be very wary of dismissing the new online or mobile offerings which currently feature really poor content or a generally dodgy approach to language learning, but which are technologically innovative, cheap, free or attractive to learners not currently reached by language schools or publishers. In the ‘ELT world’, we generally have good content but poor tech. Almost all the technology I’ve ever seen in ELT (even the very best) is pure amateur-hour compared to the tech heavyweights, and even many tech start-ups. In ELT, we can work to maintain standards of content and pedagogy while trying to catch up on the tech; meanwhile EdTech companies will improve on pedagogy and content while working to keep their edge in terms of technology. Who is going to be first to reach the holy grail of both truly great tech and really effective language learning pedagogy and content based on proven methodology? The innovative disruption theory would suggest it’s those who are able to adapt most quickly, and who are adding something totally new to the mix even if there are some pretty serious flaws right now. And it won’t necessarily be those who have the most resources or who currently have the biggest market share.

Publishers and learning providers will need to learn (quickly) to act like – or partner with – startups and tech companies in order to plug their technology weaknesses and take advantage of disruptive technologies rather than be eroded by them; EdTech companies can stumble towards gaining skills in content and pedagogy, or they can buy in talent or seek partnerships with publishers and/or learning providers to give them a short cut. Knewton is an interesting example of an EdTech company which is following this path – although they do have content experts in-house, their main strategy right now is to focus on their technology and use publishing partnerships to handle the content side of things. Ultimately, they may learn enough in the process that they can dispense with publishers and maybe even replace them. Some of the big MOOC players could adopt a similar strategy – partner with top universities to build scale and grow their brands, and thereby build a platform to start providing their own courses so no-one even needs universities any more (for some disciplines, anyway). Whether their ambition is that large remains to be seen.

Someone (maybe you can remind me who) once said that we always over-estimate the immediate effects of new technology, but under-estimate the long-term impact. That seems apt for ELT as it responds to EdTech disruption.