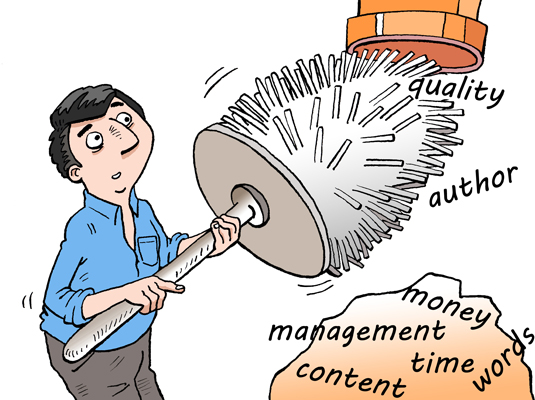 This article originally appeared on Publishing Matters: the Collate it blog on 20th January 2014.

Publishing can be an odd business, but one of publishers’ core functions has always been acting as the gatekeeper or filter between author and reader. Over the years, of course, we’ve acquired many extra functions but this filtering role has remained central – providing the assurance that a book offered for sale is accurate, appealing and worthwhile.

Editors can do a bewildering range of things, but we generally work with the content – acquiring it, commissioning it, reviewing it, correcting it or ensuring that it actually comes out on time.

However, we don’t want simply to be a pipe through which content flows onto the page (or screen). A good editor makes that content better. We help the author discover what they really meant to say. We make sure that the words are well chosen and the story well constructed. We find or commission illustrations that shine new light on the words.

And this is what leads to the editor’s dilemma. Do your job well and everyone says, “Isn’t this author great?” Do it badly and the finger points at the editor. As it should, because we are supposed to stop the rubbish getting out.

The problem is (to stretch a metaphor) that the pressures on our industry at the moment are such that the filters are getting clogged. There’s no time to clean out the pipes, no spare capacity to allow an editor to get themselves into peak condition again. Quite the reverse, in fact. In many companies, two factors combine to make matters worse.

Obviously, there’s no universal solution to these problems. Not only are the business reasons for the pressures on editorial teams not going to disappear any time soon, but also I suspect that it was ever thus (at least to some extent). The editor’s dilemma means that it’s a position that’s prone to being undervalued. But there are things that I believe we can do.

How much is enough?

The first is to get the management team to acknowledge the role of quality in their business – and to quantify it. Not all publishers have the same attitude to quality. The Folio Society, for example, are famed for their attention to detail at every stage of a book’s production, but end up charging a large amount for each copy in consequence.

Quality is a hard thing to measure, but there are reasonably hard numbers that we can fasten onto – perhaps language level, cultural sensitivity, factual accuracy or a dozen other things. The main point, though, is that ‘lower quality’ really means ‘increased risk’. That is, accepting lower quality across the portfolio means a business runs the risk of some products failing. Some titles might not make their predicted sales levels owing to poor word-of-mouth publicity or critical reviews for a book that just doesn’t feel right. More worryingly, it could also mean getting sued for large amounts because errors were allowed to creep in, or having to withdraw and reprint a book because (for example) you’ve included a map of the Middle East that doesn’t include Israel.

How much does it cost?

Putting quality in these terms means that it’s something that managers understand and can appreciate. But there’s a second, matching aspect, which is that quality costs money.

Publishing is a business with famously narrow margins, which means that there is continuous pressure to spend less money on creating the books that we publish. And the danger of the editor’s dilemma is being noticed only when things go wrong – so that editorial is seen in terms only of failure, not of success.

If the aim is to lower the risk of our publishing portfolio then it follows that we need to spend money mitigating that risk. Managing risk doesn’t mean always pushing for the highest quality (and expense) but recognising the balance that exists between spending money on quality and earning less if you don’t meet customers’ needs. Every business will achieve this balance differently, but if managers want to control their businesses then they need to strike the balance consciously and not accidentally.

That means paying your staff enough to retain the skilled workers – not just letting them leave as soon as they’ve been trained up and hence become more expensive. That means paying your freelancers enough that you can get the skill levels you need. Most of all, that means accepting that there’s a limit to the throughput of the editorial team if the business’s aims are to be met.

The task for management (and, indeed, for the editorial team itself) is to identify and manage that throughput limit. We need to accept that it really is a limit, and that adding ‘just one more project’ will affect all the other projects, too. Conversely, spending time improving your systems so that editors can work more effectively or quickly is likely to pay off. Think about the tasks that your team complains about – photocopying proofs, perhaps, or fielding phone calls from problem authors. Try out new systems for marking up proofs on screen, or scripts to deal with common author queries.

The problem is that risk isn’t a binary, either–or thing. You might get away with overloading your team for a while – but you can’t get away with it for ever. Make sure that you know your objectives and your limitations, and have systems for dealing with the inevitable times when you’re asked to exceed them.

Then, you’ve got a better chance of doing what editors, publishers and readers always want: get it right, and create good content that readers want to buy.