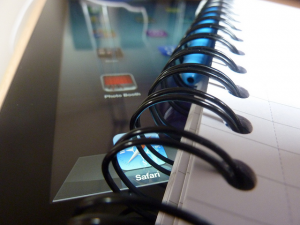 Hear that distant rumbling sound? That’s the sound of every ELT publisher rushing to create ebook versions of their coursebooks because we’re moving into the age of the paperless classroom. As one of my American colleagues so wonderfully puts it, “The toothpaste is out of the tube” – there’s no going back now. There’s a range of e-textbook types, many of which are too print-faithful to be really useful. We need to take things further, and this post ends with some of the key questions that we need to look at if we’re going to use the paperless classroom as an opportunity to improve what a coursebook is, rather than just re-create what we’ve already had for 30 years.

This is the fourth in a series covering 5 key trends in EdTech, as identified by Edudemic a few weeks ago, but looked at from an ELT point of view:

e-textbooks have, in only the last year, become a bigger deal than online learning – at least in terms of mindshare. That’s partly because online learning is now taken for granted and partly normalised, as I suggested in the online learning post in this series, but also because demand for tablet versions of coursebooks has exploded. It’s only three years since Steve Jobs sat in a leather armchair on stage showing off the just-announced iPad. Has a piece of consumer technology ever had such a big impact in such a short amount of time before? Probably not. In education, definitely not. The arrival of the tablet has led to the existence of e-textbooks. Well, they kind of existed before, but no-one used them and they were pretty pointless. Class sets of laptops were never going to replace printed textbooks. Class sets of iPads already are.

The form factor of a tablet means it’s pretty obvious to think of it as a possible replacement for a book. Add all-day battery life and ease of use, and you’ve got a winning combo. We’re starting to see whole education systems mandating paperless classrooms and bulk-purchasing iPads or Android tablets. In the US, so-called one-to-one programs are one of the hot topics. This is partly driven by the (pipe) dream of saving money by moving away from print, and partly by faith in the promise that tech can transform an education system that’s seen to be failing.

At the most basic level, you can simply replicate the printed page on a tablet screen. PDFs or even ePub files. With ePub, you also have the option to embed audio and add hyperlinks. So you add a basic level of convenience by allowing students to listen to the audio related to an exercise by tapping a button right on the page. And they can use links to navigate around the content. I’ve spoken to teachers and students who seemed quite happy to use PDFs on iPads. I was surprised they weren’t more disappointed at how basic and poor the experience of using a PDF of a textbook is. However, at that time, the iPads were still quite a new addition to the classroom, and expectations are getting higher now.

e-textbooks of this type aren’t really adding any value though, are they? OK, you can load lots of books onto one tablet which makes the school bag much lighter. And you can easily switch from your textbook to look things up online, do project work in Keynote, record audio or video, watch videos on YouTube etc – but all of those good things are just inherent in the tablet itself. The actual textbook is less usable than its print equivalent. It’s harder to annotate or write in the answers, you can’t easily flick back and forth between pages, or skim through the book.

Finally, most textbook pages are quite a lot larger than a 10″ tablet screen. If the book is reasonably dense on the page, that means constantly zooming in on the content you want to focus on. Not good.

In ELT, publishers are still getting their act together, and even these print replica books aren’t yet standard issue. But for big coursebooks, it’s already too late to do something this basic unless it’s as a stopgap while putting together something a bit richer and more usable. Basic e-textbooks will probably live on for a while though, at the bottom end of the food chain – i.e. for books which don’t sell in big enough quantities to justify spending much money on. The biggest advantage of basic print replica ebooks from a publisher’s point of view is that they’re relatively cheap to produce. However, if you don’t work in publishing, then I expect you think they’re cheaper to create than they really are. The production costs aren’t too bad – but re-clearing permissions for artwork and photos can be an expensive nightmare, no matter how basic the ebook.

Taking things a step further, we’re starting to see a lot of e-textbooks appearing which contain interactive versions of the activities. You know the score – drag and drop gap-fills, the ability to type answers into gaps, multiple-choice. If you add auto-marking and the ability for students to save their work, then we’re finally starting to move beyond what printed textbooks can do. That’s assuming teachers are happy for their students to be able to see the answers whenever they like, do the exercises before they’ve told to, play the audio whenever they like etc. Sounds like a potential classroom management nightmare to me.

These are generally created as apps, although ePub3 now means you can create something reasonably interactive as a real ebook. Apps are great and massively more capable that any ebook format, but you can only distribute them through the App Store, whereas ebook formats can be bought in a variety of places. Beyond that, take a look at the like of Inkling and Kno – e-textbook platforms with all sorts of good features, which certainly go way beyond slavishly copying print.

Have a look at Nearpod if you haven’t already, and you’ll see where things are going in terms of ebooks helping make the management of your lessons easier. Again, this is where they can take things beyond what print can do. Teachers able to send content to students’ tablets, check on what each student is doing, share a student’s screen with the class. This is just the start, and I think we’ll see big developments here over the next couple of years.

When it comes to big coursebooks available for iPad (or Android), it’s still very early days. Some are available, and many others are in development. Most are apps; others are in various ebook formats. Some are straight print replicas; others are more interactive, although designed to look just like a paper book, complete with cheesy page turn animations. So, not much to see right now, but we’re going to see an avalanche of coursebooks in ebook form over the next couple of years. The fact that entire education systems are now going paperless has pushed ELT rapidly to a tipping point. Ebooks have been around (and talked about in ELT) for years. But it’s the iPad – with a couple of years of lag – which is changing the whole landscape of ELT publishing by emboldening ministries of education, universities and schools to go paperless. The rush to get something ready for these schools, though, could result in a lack of innovation. Maybe it’s not just the time pressure that’s causing that, though. Is it possible that years of experience and expertise in creating excellent print books aren’t much of an advantage when it comes to creating something brilliant for teaching and learning English on iPad? Whether that’s the case or not, the expectations of schools and students are changing, and a textbook replica, no matter how interactive or cool-looking is likely not to cut it soon. Something more ‘native’ to the tablet environment is needed.

You may not have detected a huge amount of excitement in my description of print replica or even interactive e-textbooks. That’s because they’re not very exciting. They add some marginal benefits over print, but is it really enough to make up for what you lose when you move away from books? Quite a few people lately have told me that there’s a generational divide here: anyone under the age of about 20 simply doesn’t notice the disadvantages of digital when compared to paper. If that’s true, then maybe younger people will be more tolerant of the clunkiness of using an e-textbook which is derived directly from a printed book. I suspect regular tablet users are going to be more demanding, though. Given the level of interactivity and the quality of design and user experience that can be found in a 99p app, then anything that isn’t super-slick is going to grate.

So, that means we need a total reinvention of the coursebook, right? If so, here are some of the questions that it might be interesting to think about as we start to tackle that challenge:

I don’t think anyone really knows all of the answers yet – but it’s going to be a fun couple of years while everyone tries to work all of this out!