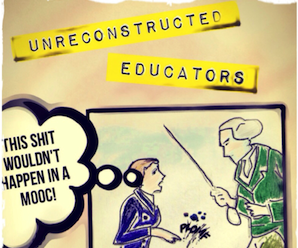 A doctor and a teacher from the 19th century climb into a time machine (possibly built by a Silicon Valley dude trying to disrupt the past) and travel to the 20th/21st century. The doctor visits an operating theatre, where he witnesses triple-bypass heart surgery. He emerges from the experience in a state of rapturous wonderment at the achievements of modern science. The teacher finds himself, coincidently – this isn’t a set up – in a modern classroom, where he sees a chalkboard, some desks and books, and a fellow teacher in front of rows of children, dictating notes to them. However, he questions whether he’s really travelled in time at all – for surely, this classroom is almost identical to the one he left behind in a smog-filled Victorian metropolis?