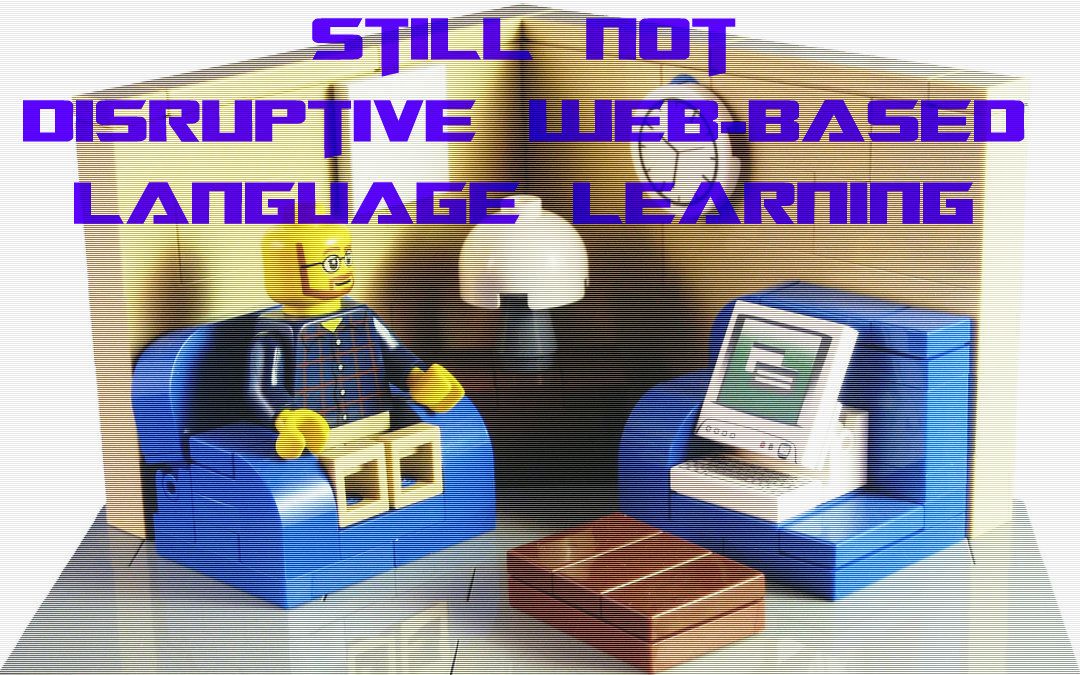 Jonathan Dykes runs a group of language schools in Barcelona as well as one of the first online schools, Net Languages, which makes for a unique perspective on the merits and shortcomings of both. This post first appeared on his blog.

Christmas 1997. I remember it well, chiefly as I spent most of the holiday developing a business plan for a bright idea I’d had: to use the internet to teach people who, for whatever reason, would never make it into one of our language schools. The plan must have had some merit as it persuaded several people to invest and lo, Net Languages was born in March 1998.

Two of the key members of the start-up team were my esteemed colleagues, Scott Thornbury and Gavin Dudeney. They put together a team of content writers and techies and masterminded the first courses, which were launched in September 1998.

I’m not entirely certain that we were the first company to offer online language courses but we might well have been. (Would that merit an entry on Wikipedia?)

Back in those days, most people were still using dial-up connections with a download speed of 256k, so options were limited. I distinctly remember an expert in the field saying that he couldn’t imagine ever being able to stream video across the internet. How times have changed.

Yet in some respects, they haven’t. Despite the fact that there are now hundreds of ways of learning languages online, bricks and mortar language schools still flourish in many parts of the world.

Personally, I’m delighted that we can still operate viable language schools alongside our online courses. But I’m a little bit surprised that the online option hasn’t disrupted our traditional business to a greater extent. Why is that? Why do students (especially adult students) still make the effort to attend traditional language schools and pay their (generally speaking) higher fees?  Let’s think of some possible answers:

Access to the necessary technology isn’t yet widespread. That may have been the case 15 or even 10 years ago, but I’d bet a small fortune that the majority of students who attend private language schools these days have very good internet connectivity and all the hardware they need. Probably more than they need.

The social element is missing online. Again, this may have been a convincing argument 10 or more years ago, but since the rise of social media, more people spend more time socialising online than they do face-to-face. This suggests they don’t have to go to a language school to meet people to hang out with. On the contrary, studying online they can ‘meet’ and chat to people from all over the world.

Online teaching isn’t as effective. Well, we could debate this one loud and long, but most evidence I’ve come across suggests the opposite. In other words, courses that are either entirely or partly online are generally more effective than courses that are 100% classroom based. Is this because studying online involves assuming a greater degree of responsibility for your own learning? Possibly. Could this turn some people off? Possibly.

People need the discipline of studying at fixed times. This is certainly something that most language schools insist on. Online learning gives people the option to study whenever it suits them, which ought to be an advantage. ‘You never need to miss a class’ is something that most online language education providers argue, but perhaps this freedom is too great for some people. If you can study at any time, it’s easier to find an excuse for not studying right now. Procrastinate or learn. Again, it comes down to taking greater responsibility for your own learning.

5. Bad experiences in the past

People may have tried a crap online course and come to the conclusion that all online courses are crap. Well, there is an incredible amount of rubbish out there. Even large companies with budgets hundreds of times the size of Net Languages’ annual turnover are capable of producing material which, if it teaches anybody anything, achieves this more by accident than design. Also, given that second language acquisition is a subject that challenges even the experts in the field, most consumers will probably judge a product by its price (if it has one) and/or by its bling factor, rather than by its ability to effectively teach anyone anything. Once bitten by the bling factor twice shy?

6. The role of the teacher

The presence of a teacher throughout the learning process. Maybe that’s it. Maybe a certain proportion of students simply feel that they need a good, professional teacher with them all the time. Someone who will answer their questions, correct their mistakes, smile at them when they’re making an effort and generally show interest in them and motivate them to improve. Perhaps these are the people who are keeping language schools open. But what happens when they discover that they can have their own teacher online? Maybe not all the time, but often enough. (At Net Languages we offer courses with and without a tutorial service. What’s more, students who choose to buy the service get to work with the same teacher throughout their course).

7. Too much screen time

People spend all day staring at screens and prefer to do something different when it comes to learning a language. I’ve heard it said. Of course an image projected on a whiteboard in a classroom is tantamount to looking at a screen and digital projectors are becoming standard pieces of kit in most language schools. We assume students value and expect digital classrooms, but could they end up having an adverse effect on our schools? Perhaps we should pull the plug on anything electronic and adopt Scott’s materials light approach to classroom teaching. Would that help keep the bums on the seats in language schools and off the seats at home? Or would students feel they’re being short-changed if we took all the tech stuff away?

In short: what is it that keeps students turning up to class rather than turning on their computers? It could be a combination of all of the above, although if I had to pick one, my vote would go to number five. That’s the one most of our own students mention when we ask them the question.
Image by andertoons via Compfight cc Text added by ELTjam.