SOLE – does it work with adult language learners?

As we look forward to the 50th IATEFL conference in April 2016, I am thinking back to April 2014 in Harrogate, when Sugata Mitra gave his very controversial talk called “The Future of Learning” which got reactions like “Did he just say that teachers are obsolete?”, “Students can learn from the internet?”, “All you need are grannies?!!”, “How dare he suggest that teachers aren’t needed!!”, “SOLE, SOLE? He doesn’t know what he’s talking about!”, “Charlatan!!”.

The talk divided the audience so much that half of them stood up and walked out, taking to twitter to vent their anger while the other half were still in the auditorium giving the speaker a standing ovation. I watched the recorded talk later that week. Interesting. Inspirational. Controversial. An engaging and thought-provoking talk which was followed by many blog posts and tweets accusing Mitra of having a neo-liberal agenda, of being an idealist and not an educator and anti-teacher. Personally, I took away three things from the talk:

SOLE stands for Self Organised Learning Environment. In a SOLE teachers attempt to spark curiosity by asking children to explore a big question, using the Internet and working together in small groups. Towards the end of the session each group is then invited to present their findings to the rest of the class.

There are a number important features of SOLE that have emerged that help to maximise its effectiveness. Firstly, the ‘big question’ plays a prominent role and when a relevant and challenging question is posed many children do respond positively and engage in the lesson. Secondly, the SOLE approach enables teachers to integrate the use of the internet into the lesson in a safe and constructive manner. Finally, the teacher is expected to stand back and play a much more minimal role in the lesson, enabling children to collaborate and seek out the answers themselves. The teacher therefore becomes much more of a facilitator.

Intrigued, I contacted Professor Mitra at Newcastle University, home of SOLE Central, in the hope of getting an interview for the International House, London teachers’ blog. He was not available as he had already given a number of interviews. So I suggested we try the SOLEs method with adult English language learners because until then SOLEs had only been used with children. Surprisingly they agreed and this is what happened:

We spent eight months putting together a plan of how we were going to attempt SOLE with adults. There were a lot of things that needed to be taken into consideration: the students, the school and its reputation, the teachers and their reaction. Were they going to think I was trying to replace them with computers? Did we want to get involved in something so controversial? After a Q&A meeting with the teachers, the school Director and Sugata Mitra to reassure everyone that this was research, we started working on the next stage.

Both students and teachers were asked to keep a journal and write down their thoughts whenever they wanted to during the course. The students were not great at doing this, even in their L1. Both teachers kept a record of how they felt after each lesson.

One of our main worries was that these were adult students, they had been through an education system in their own country and had fixed ideas of what the teacher’s role is and what a typical lesson is like. There was also the question of self-organising. In Sugata’s work with children, they organise themselves into groups without instructions to do so. Would this work with adults? Would they come together as one big group or would they arrange themselves into smaller groups?

A meeting was arranged with the students a week before we started the classes.I explained to them that the lessons were going to be different to what they had experienced before without telling them how the lessons would be different. They were asked to take a placement test, which they would retake at the end of the four weeks to measure progress.

What happened next was something quite extraordinary…

Feeling apprehensive, nervous, excited and unsure how the students would react and if they would engage with questions we’d set, we started SOLEs. The teacher was desperate to pre-teach lexis. How would pre-intermediate students understand the question? I managed to convince him that this was not possible. Surprisingly the students worked out the meaning of unknown words between themselves. We told them they had 40 minutes to find out the answer and we would return for the presentations. The learners were all quite shocked when we left them. What we found when we returned to the classroom was quite incredible. The students had self-organised into smaller groups and were busy working on their presentations. They actually asked for more time to finish their work. Their presentations were good with every group having different, interesting answers and everyone participating. The teacher encouraged questions from the other students. 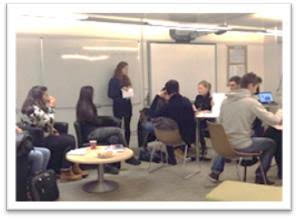 The following two lessons were the same, but by the fourth lesson I sensed a little frustration from one student in particular. I asked him what was wrong and he quite clearly was not happy without a teacher. He also thought the lessons needed more variety with error correction and pronunciation. We responded by changing Friday’s lesson from a question to a task to find three apps to help improve your pronunciation. Unfortunately, the student did not attend this lesson. He came back for one more day before giving up and was the only student to drop out of the course. 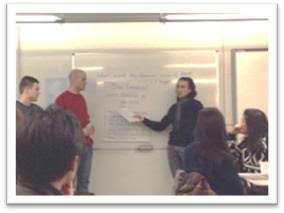 In weeks two and three we decided to introduce a CAE reading and a CAE Use of English paper. Sugata Mitra gives reading texts to the children he works with. The only condition is that the text has to be four levels above the students’ comprehension. We left copies of these in the room for the students to complete. Again students organised themselves into groups and did the tasks. To our amazement, the groups got almost all the answers right. Yes, they were working collaboratively and using the internet but these were pre-intermediate students answering advanced level exam questions correctly!

As we reached weeks three and four we found the presentations becoming longer, more sophisticated, with every member of each group eager to speak. The students engaged with all but one of the big questions. They didn’t like “Identify the best and the worst place to live in the world giving reasons to justify each location.” 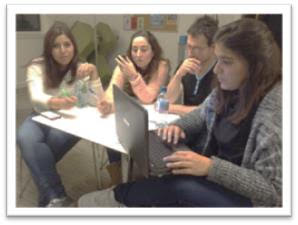 As the weeks progressed we saw all the learners’ confidence and fluency soar, and received feedback like this from the students:

“I believe the course has been good for improve my English. Maybe I make the same mistake of before, but I learned new words and I’m more confident speaking. I think my speaking is more fluently than before and I’m happy about it!

The two teachers involved in this pilot also changed their views of what the teacher’s role is, choosing to apply what they learned from this to their own teaching by reducing intervention and allowing students to work more independently.

There are still a lot of questions that need answering about using this approach with language learners… How do we measure progress? How do we incorporate all four skills and pronunciation? What is the teacher’s role?

The main thing that’s struck me is that a SOLE is not about technology replacing the teacher. It’s about questioning and redefining the role of the teacher in the 21st century.

The full report on this pilot is available to read here: 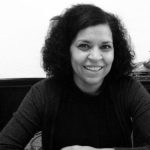 I have worked in ELT for 25 years in many different contexts from private language schools to FE and HE, teaching students from 6-80 years old.  I have been a DOS/Academic Manager since 2002 and I have been working at International House, London since 2010 as Director of Studies.  I am also a teacher trainer for CELTA and Trinity.

18 thoughts on “SOLE – does it work with adult language learners?”