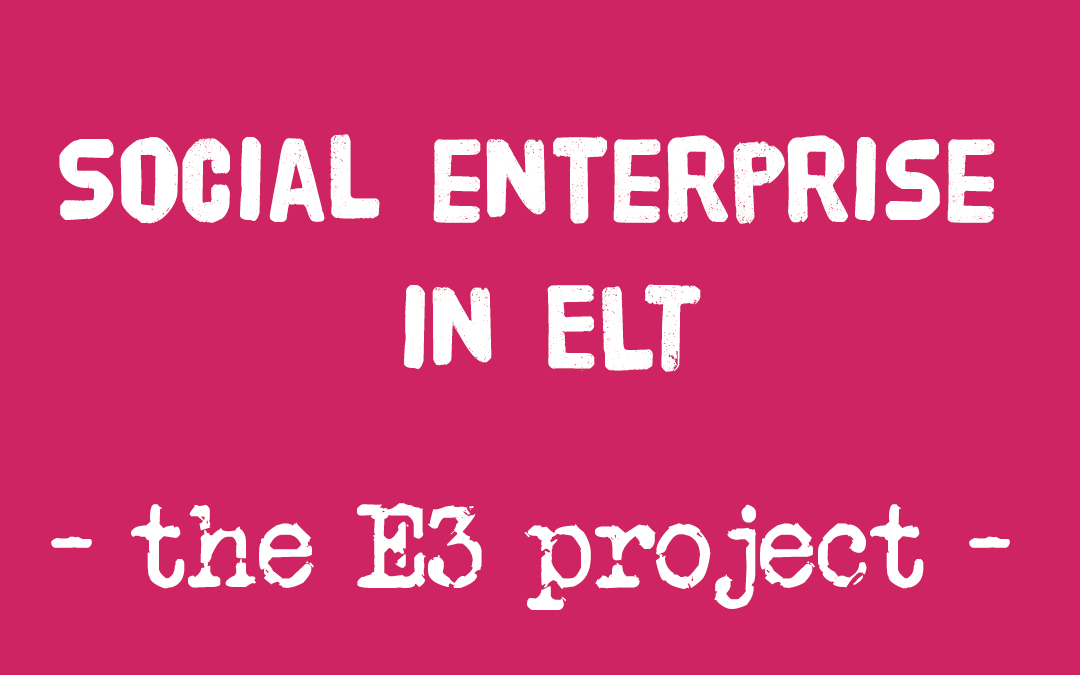 I first heard about the E3 Project a year ago and finally managed to arrange a meeting a couple of weeks ago, just over the border in E9, East London, to find out more about this social enterprise project in ELT.

The E3 Project is a collaboration of four local, established charities and a third sector social enterprise consultancy called J-go Training Limited. It was set up in 2013, after receiving a £500,000 funding allocation from the Department of Communities and Local Government as part of their Community Based English Language programme.  The funding was for a 17-month pilot project, ending in March 2015. As the E3 Project is now entering its second phase, it was a great time to catch up with Naima Bihi and Jon Hems to hear more about the project, the language learning perspective and the plans for the future.

The primary aim of the E3 Project is to engage those with the lowest levels of spoken English, particularly women over the age of 30, who are isolated within diaspora communities but committed to living in the UK. This is based around three main areas; digital inclusion, positive integration and active citizenship.

The E3 Project is divided into two main phases. In the first phase, participants are given a tablet loaded with a 24-episode soap opera entitled ‘London is Home’, telling the stories of 4 women who have similar lives and backgrounds as the intended participants in the scheme. These characters live lives and face challenges similar to those of the participants in the project and so act as role models in the way that they integrate into London life and become active citizens in their local area.  Participants watch an episode and then watch a number of talking teacher videos, where a teacher talks them through some of the phrases used in the episode and gets the participants to focus on the vocabulary and repeat the phrases. They then answer a simple comprehension check question which gives them access to the next episode.

Once they have completed all of the episodes the participants are invited to a Phase 2 introductory session where they meet other participants and get set up in the online E3 learning community – a private Facebook group for participants. At this stage the participants also choose one of three available projects to work on: community gardening, volunteering in the local community or starting a pop-up market stall.

As the main aim of the E3 Project is to reach out to people who are not otherwise engaged in the community or benefitting from the service available, the involvement of the local charities in this project is key. Each charity involved is well-established and respected in the local area.   With years of knowledge and a network of contacts within the community they are trusted by the people that they aim to serve. For this project the charities were asked to reach out to women beyond the charity’s usual points of contact within the families. So a charity may have had contact with a young male or female in a particular family, but that individual’s mother, or aunt or grandmother was the intended participant for the project. In total, 550 people were selected for inclusion on this basis.

In order for the soap opera episodes and lessons to be accessible, participants are provided with an inexpensive 7″ tablet known as the E3 Techbook to keep as their own.  The E3 Techbook has access to all 24 episodes in the series and their corresponding lessons, as well as internet connectivity, a web browser and several other useful apps. During the Phase 1 intro, participants are also set up with a Gmail account which they use to set up a Facebook profile, unless they have one already. The aim of this was to enable, and maximise, participants’ use of freely-available technology which would help them to meet their aims within the project and promote inclusion.

In terms of methodology, the E3 Project prioritises providing engaging content that participants can relate to. Through the filming of the videos the team were able to explore real-life, everyday situations with which participants often struggle. The participant also have links to four video clips which relate to language from the main video and are spoken by actors pretending to be teachers. The examples I saw involved highlighting key phrases from the episode and asking the participant to listen and repeat the phrases. Each episode then links to a website related to the topic of that video.

Each episode is followed by a simple multiple choice concept-check question for the participant to answer. Questions may relate to specific elements of the episode or to broader topics.  After successfully answering the question, the participant is given access to the next episode.

It was decided that rather than assessing learning directly, success would be measured by the number of people who got through Phase 1 and started the community integration activities in Phase 2, thereby achieving the aims of the project. It was felt that the integration of participants into an environment in which English is the medium would in itself be a demonstration of achievement.

The role of ESOL

Talking about the pedagogy and methodology, Jon said that the project had been thought of as a non-starter by most of the experienced ESOL community he had spoken to. Apparently teachers and educators felt that any deviation from the classroom model and any dependency on technology would not promote sufficient engagement or the language gains seen in current courses. This lack of buy-in meant that the project was done largely without educational input in terms of syllabus and content.

The aim of the project was to shake up the traditional way of engaging immigrant communities in language learning and offer alternatives to the classroom approach. The success to date demonstrates that these aims are being met, but both Jon and Naima feel that the project would benefit from some more input on pedagogy. To that end, if anyone who is experienced in ESOL would be interested in providing some consultancy, Naima would really love to hear from you. Please contact her on info@j-goltd.com

As more of the participants reach the end of their content in the soap opera, the E3 Project is continuing to organise the Phase 2 launch parties and is starting to promote actual integration into both physical and online communities. The hope is that at least 280 learners will make it through Phase 1 to Phase 2 by the end of the pilot and that the project will be able to continue to run and to expand. If the project is deemed to be a success, there will be a wider roll out within the Greater London area. The larger aim is to offer this sort of community integration and language support to women all over London and to help more people to integrate more effectively into the societies in which they live. The e3 partnership is working on sustainability measures to increase their capacity to deliver the learning programme beyond the project end in March 2015. At the moment, it seems that their innovative approach to the world of ESOL is proving both popular and effective at engaging people in their local communities.