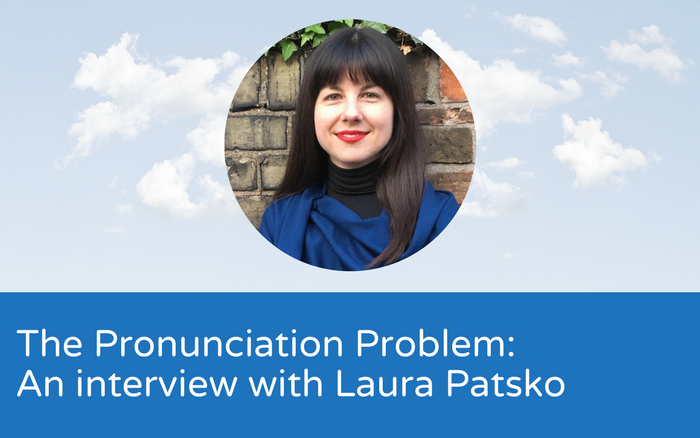 The pronunciation problem: an interview with Laura Patsko

Laura Patsko is a language consultant specialising in the practical applications of linguistic research. In this post, Laura addresses how pronunciation is currently being addressed by ELT publishers and content creators, and what could be done to better support English learners.

Is there a ‘correct’ English accent that should be taught?

In a word, no. In a few more words … I think terms like “correct”, “right” or “best” are misleading when describing language, because there is so much variation out there and even so-called authorities often disagree. These terms are all relative. What is “correct” depends on what you’re measuring against. This isn’t about being politically correct; it’s about being realistic. It’s about recognising that language – including pronunciation – varies according to so many factors, like the age of speakers, their geographical origin, and so on. And even individual speakers don’t speak (and pronounce) in a wholly consistent way. Effective communicators tend to accommodate to their listeners, making slight adjustments to how they speak in order for their audience to understand them better. They may not even be aware that they’re doing this.

How good a job do you think ELT coursebooks (and ELT more generally) do in covering pronunciation?

ELT courses vary considerably in how (and how well) they address pronunciation. Some are more explicit, with sections labelled “Pronunciation”; others include occasional exercises with other labels such as “Speaking” or “Sounds”; many, unfortunately, omit pronunciation altogether. My own experience suggests that many teachers, materials writers and editors are generally insecure about their own knowledge of how best to approach pronunciation and so it continues to be neglected in classroom practice. And as at least one review of pronunciation materials has pointed out (Levis & Sonsaat, 2016), the minimal time and space that are typically devoted to pronunciation in the pages of a coursebook may well lead teachers and learners to conclude without much consideration that it can be sacrificed in favour of other “more important” things.

More broadly, opinion is somewhat divided in the research literature on how well ELT materials address pronunciation. Some reviewers, such as Watts & Huensch (2013) conclude that, while there is an “almost universal lack of systematic coverage of topics” and a similar “lack of sufficient teacher training for pronunciation instruction”, the syllabus content of the textbooks they reviewed nevertheless “primarily reflect the literature on comprehensibility and intelligibility.”

Other reviewers, such as Wrembel (2005), point out that most materials are still clearly oriented towards native-like pronunciation, leaving the question of “intelligible to whom?” – a key question if we take a more international perspective to English learning – wide open. Levis and Sonsaat (2016) identify three key principles that are crucial to the aim and content of pronunciation materials: the prioritisation of intelligibility; support in the teacher’s book for all teachers regardless of the degree of their experience and training; and integration of pronunciation with other areas of language learning. Basing their evaluation of four current ELT coursebooks on these three principles, Levis and Sonsaat conclude that while intelligibility was fairly well addressed, pronunciation was only integrated with other language areas to a minimal extent (i.e. only with vocabulary and grammar, but not with skills) and that the accompanying teacher’s materials were largely unsupportive for all but the best-trained and best-informed teachers. And another review by Levis (2016) into how research findings are reflected in pronunciation teaching materials demonstrates that some things tend to be over-represented (e.g. the supposed importance of producing connected speech features like linking and intrusive sounds), some things tend to be under-represented (e.g. the real importance of words and phrases spoken by multiple speakers and in different phonetic environments) and some things are represented more reasonably (e.g. the assumption that it’s never possible to teach everything and we must set priorities).

All things considered, it seems there is still some way to go before ELT course materials – and the teachers that use them – are able to address pronunciation in class appropriately and effectively.

Why do you think the variety of accents encountered in courses is so limited?

I think there are three main reasons. Firstly, that many teachers and learners think they can and/or should only choose from two model accents to hear and copy (standard American or standard British), and commercial materials creators of course have a natural drive to meet their markets’ demands. Related to this, many teachers and learners fear that listening to any other accents will make them somehow “pick up mistakes” or “learn the wrong pronunciation”. And thirdly, there is an argument that developing listening skills in a second language is very difficult, and that particularly at low levels of proficiency, it is both least cognitively demanding if the learners only have one mental model of speech to decode (and they can wait until later to be exposed to a wider range of accents).

To the first point, I would counter that materials creators and consumers are caught in a vicious circle, where one party demands what they think is their only option and the other party offers only one option. We end up trapped in an accent preference stalemate! When consumers are better educated about the genuine range of choices they have, they may make different choices. People often say they want what they have been told they should want. I remember reading a blogpost about an analogous consumer choice situation a few years ago.

To the second point, this fear is logically flawed and easily deconstructed. If it were so easy for learners to “pick up” another person’s accent merely by being exposed to it, then we wouldn’t need to teach pronunciation at all. This complaint also fails to distinguish between reference models and attainment models, and fails to distinguish between the productive (typically called “pronunciation” in ELT) and receptive (typically called “listening”) sides of speech. More on this in just a moment.

And to the last point, this seems a more legitimate challenge to the notion of including greater diversity of accents in ELT materials. John Field argues, for example, that it would be best to only expose learners to one or two standard models until they’re at a higher level of proficiency, and points out that many materials which try to introduce a wider variety of accents do so in a somewhat reckless way. My own view is that while it’s definitely useful to have a standard model for reference, many learners do not progress to particularly high levels in formal English education. By waiting and shielding them from the reality of how many accents are out there, we may be missing the only chance they have for appropriately principled, guided and considered exposure to accent variation.

What could coursebook writers and publishers do to improve the situation?

Provide exposure to linguistic variation (and not only in pronunciation) in an appropriately principled, guided and considered way!

In this context, what can teachers do to help learners deal with a variety of accents?

Exactly the same as above; provide exposure to linguistic variation (and not only in pronunciation) in an appropriately principled, guided and considered way.

What can learners do outside the classroom to help themselves?

Understanding partly comes from familiarity, and familiarity comes from exposure. So even when there is no teacher available to guide them, learners can still be listening to a variety of English voices. There are plenty of authentic recordings available online these days, many of which also feature transcripts (e.g. TED.com, the This American Life podcast, etc.).

Finding sources of listening material that are of genuine interest to a person (by seeing beyond the “learner” label) is a key aspect of engagement with the language learning process. In terms of developing their productive skills – their own pronunciation – learners can work with self-study materials, like English Pronunciation In Use, and find people to practise speaking with. Ideally, these would be people from a different first-language background (though not necessarily native English speakers), because when two people with the same first language converse in English, they may find that they pronounce things in a way which is perfectly intelligible to each other but less intelligible to somebody whose first language has different pronunciation characteristics. For example, people from Spain will probably find it fairly easy to understand other people from Spain when they’re speaking English. But they might find it more difficult to understand someone from Beijing or Istanbul or Cardiff, and so on. Speaking with people whose first language is different to yours forces all speakers to make an effort to be understood by somebody whose ears and brain haven’t developed their listening abilities in the same limited linguistic context!

Do you think the approach should be the same for both listening and speaking skills?

A very good question. The short answer is no. The longer answer is that the amount of variation an English user is likely to encounter today is far greater than the amount of variation it would be wise to produce themselves! In other words, a person usually speaks with only one accent; but – at least as far as English is concerned – they are bound to hear a great number of accents. However we encourage learners to speak, we will also need to prepare them to listen to a diverse range of other speakers. I’ve put together a lesson plan on how teachers might do this: Helping learners understand different accents.

Laura Patsko is Senior ELT Research Manager at Cambridge University Press, and a former English teacher and teacher trainer. Laura holds a BA in Linguistics and an MA in ELT & Applied Linguistics, and specialises in the use of English as an international lingua franca, pronunciation teaching and the practical applications of linguistic research. She blogs at laurapatsko.wordpress.com and elfpron.wordpress.com, and tweets as @lauraahaha.