Playforce: The Language of Learning Through Games

So it’s one thing to avail oneself of the endless blogs and sites that tout the ‘Top 10 Games For the Classroom’ or ‘Top iPad Apps for Learners’, but it’s entirely another to create a forum and approach for users to comment on the learning experiences they have encountered through the various games they play.

This is exactly the aim of playforce.org, and “Cool” doesn’t quite cover it.

With the tagline ‘Learning From the Games We Play’, the site invites learners, parents, educators and gamers to “[talk] about what you’re learning when you’re playing your favourite game”. What that invitation has generated is a searchable database of  dozens of  games each of which has been carefully tagged with the various learning attributes that its players have identified. These include Decision-Making, 21st Century Skills, Adaptability and Critical Thinking. Not to mention more specific subject areas like Arts, Humanities, Maths and Engineering. So, if you’re looking for a game that other users have identified as being useful for developing Spatial Reasoning, then it’s as simple as browsing the games that are tagged with that attribute. 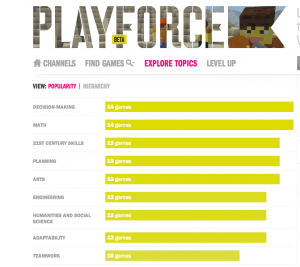 As well as searching by learning criteria, you can browse the games according to their rating; from early childhood to adult (don’t want that pesky GTA turning up in a young learners class by mistake, even if it does effectively promote Critical Thinking skills). Also ,you’re able to browse the games by their media of delivery; board games, card games, PC, console, mobile, social etc. The sites inclusive approach to games and gamings certainly adds to its appeal and usefulness.

The site buzzes with hundreds of user ‘perspectives’; brief descriptions of the game in question along with the user’s choice of learning/topic tags. These succinct posts add a community aspect to the site and help to couch each game’s learning attributes in terms of what actual players know rather than in the edu-speak of experts. A further investigation of the ever-popular Minecraft reveals a user-generated description of the game as well as several ‘perspectives’ commenting on various aspects of the game’s educational appeal; Arts, Engineering and Technology.

What’s of great interest is that, by inviting UG content, the site encourages players to develop their own tools for evaluating and articulating the qualities that the games they play promotes. Rather than being passive (albeit joyful) gamers immersed in the playfulness of a game, such an approach requires gamers to assess the validity of a game beyond its immediate fun appeal.

Playforce is an Institute of Play project, a foundation that is working hard to promote learning through games and game tech. Their site is a rich seam of gaming goodness.

1 thought on “Playforce: The Language of Learning Through Games”