Well, it was an exhausting, uplifting, challenging and changing weekend! The Cambridge EdTech Startup Weekend reached its denouement on Sunday afternoon with the teams presenting their ideas to a panel of judges. The ELTjam team was there all weekend as co-organisers, and to cover the event (and by ‘cover’ we mean ‘tweet furiously about’) and to capture a few interviews with teams and mentors as and where time allowed.

Even whilst writing a recent post announcing the event we weren’t 100% sure of what we should expect from the weekend or even the delegates themselves. What sort of delegate would the event attract? Would we see any really compelling EdTech ideas put forward and developed? How would the term “EdTech” even be interpreted? 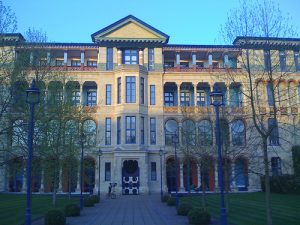 The event kicked off on Friday night with delegates arriving at the rather impressive Judge Business School in the centre of Cambridge. As names were taken and T-shirts dispensed we became increasingly surprised by the variety of people that were coming through the doors – software developers, educators, finance execs, startup-enthusiasts and recent graduates from a variety of fields. The gender split was more or less 50/50, the age spread went from 16-60’s and every continent was represented. What all of the fifty delegates had in common, however, was that they saw the value in coughing up the £65 registration fee as well as the entirety of their weekend in order to participate in sharing and running with ideas.

The format was quite straightforward: on Friday night all of the delegates gathered in a lecture hall to pitch their ideas for education businesses to the rest of the room (after an initial presentation from FiWare on their cloud-based infrastructure for sharing and collaborating on APIs). Before the delegates were invited to pitch, Director of Accelerate Cambridge and lead organiser Hanadi Jabado asked for a show of hands from the audience to gauge how many people were intending to present.

But once the opening 60-second pitch had been delivered there was a tangible shift in the energy within the room. It was as if the creative impulse suddenly became airborne and contagious. The line of people waiting to take the floor to share their idea continued to grow until we reached  a total twenty-nine  delegates deciding to pitch something. It turns out that watching someone else attempting to express an inchoate idea is a very effective way of getting one’s own imagination whirring into action. Ideas breed ideas.

Those twenty-nine pitches were then whittled down to eleven through a round of Post-it note-based voting. The remaining pitch-makers then took to the floor to sell their idea to the rest of the room, taking the opportunity to clarify what skill set they had and what skills they needed. Once that was over, the rest of the delegates were asked to attach themselves to an idea. Watching this stage was a particularly fascinating moment. The lecture theatre started to resemble a stock exchange trading floor as delegates buzzed from point to point, listening to the original pitch-makers continue to sell their idea.

By the end of the night, teams had been formed, names had been given to the projects and each team had been assigned a ‘War Room’ in which to set themselves up for the duration of the weekend. In the few hours since registration we’d witnessed a collection of strangers be sculpted into collaborative teams formed around the appeal of nothing more than an idea.

Over the course of the weekend the teams were given various forms of support. The Assistant Director of Accelerate Cambridge (and Teaching Fellow in Entrepreneurship at the Judge Business School) Simon Stockley gave presentations on the business model canvas and presentation skills to help the teams hone the business aspects of their ideas. Throughout Saturday and Sunday the teams were given access to expert ‘mentors’. These included several senior staff from Cambridge University Press, Ben Whately from language learning company Memrise (creators of the brilliant Cat Academy app), learning tech consultant Kirsten Campbell-Howes (known by many in the ELT world), Charlie Harrington from Knewton, the head of computing at Eton College, the CIO of BNY Mellon, the head of developer relations at Pearson, and the head of the UK Government’s Sirius Programme.

Half way through the weekend, we chatted to Simon Stockley, who told us that the atmosphere was quite different from similar events he’s attended in Silicon Valley, with the Cambridge event being notable by its lack of whooping and high-fiving at every possible opportunity. What a relief! The atmosphere was certainly pretty intense, though, with the teams becoming noticeably more stressed on Sunday as the 4pm deadline approached to get presentations finalised and loaded onto the lecture theatre laptop, ready for the final pitches. The vast majority of the teams seemed to have bonded, with very few fallings out, considering they’d been confined together for an evening and two days in a fairly high pressure situation.

As 5 o’clock approached, the judges arrived and were installed in the lecture theatre, ready to see the pitches. On the panel we had Peter Phillips (CEO of Cambridge University Press), Jack Lang (the man behind the Raspberry Pi computer), Ciarán Rooney (the Chief Technology Officer of Busuu), and Toby Sims (head of Developer Relations at Pearson). A pretty intimidating panel! Each team was allotted a strictly enforced 10 minute slot – 5 minutes to pitch and 5 minutes to take questions from the judges. The culminating pitches of the weekend revealed …

Campus Startup: an online platform to bring together individuals that want to set up a startup on campuses around the world, e.g. to match a developer with an entrepreneur

Ignite: a wearable device to help people improve their tennis skills but with more sporting skills it can be applied to

EdCompare: a ‘GoCompare’-style website that brings the best EdTech offerings together in one place and reviews them according to standardised criteria, as well as providing expert analysis

Culture Shock: an app that addresses the problems of acclimatisation/alienation encountered by students moving to international schools

Eduare: an application that enables lecturers to elicit real time responses and feedback from the students in their classes e.g. drawing graphs, pointing out key features on a diagram

Math Motion: a TPR approach to teaching maths to young learners whereby they use their hands and body parts to respond to mathemetical questions/prompts

Read It!: a supported reading web app that enables learners to become independent readers through the use of contextualised help/hints and audio prompts at word level

B.I.R.D: an application consisting of specialised games and interactions for children with learning difficulties

The range of ideas was impressive and , although the learning/pedagogical aspect was at times sketchy, each team responded to the EdTech theme of the weekend with creativity.

After much deliberation from the judging panel (and much nail biting from the teams themselves) the winning teams were announced:

Special mention: Eduare (for proving a real-time demo of their app being used)

If you’re interested in what it takes to win an event like this, here’s the video of Read It’s winning pitch:

There’s a lot that we could call out as being take aways from this event, but there are few that emerge as being worth a mention. Firstly, it was the fact that there was no prize up for grabs. There was no cash investment to be fought for, or high-rise office space being made available to the victors. The teams were driven by the desire to see their ideas develop, grow and generate more interest. Secondly, there were hardly any participants from the world of ELT. As Nicola Prentis observed in her post following the weekend, the industry was disappointingly under-represented. Did the ‘Education’ flavour of the weekend not resonate? Or, to be fair, it could be because it was a Bank Holiday weekend. Watching other educators speak and make decisions like startup entrepreneurs was invigorating to say the least and it makes one wonder how much ELT would benefit if more of its practitioners did the same. A weekend is more than long enough to completely change the game. All you need is an idea …

Check out a Storified version of ELTjam’s twitter coverage here.