Jenny Dance, who runs a language school in Bristol, tells us how she got the idea for a new pronunciation app to help her students, and how she turned that idea into a product.

If you’ve been a teacher or a learner in a language classroom, you’ll probably recognise this situation:

In my case, as a learner of French, it was the difference between ‘peindre’ (to paint), ‘pondre’ (to lay an egg) and ‘pendre’ (to hang sthg up). Eventually, I could hear the difference but I still lacked confidence when I tried to produce the sounds. In truth, I still do (I’ve just tried it, for old times’ sake!).

As a teacher of English, I found myself trying to help a Polish computer engineer improve his pronunciation ahead of a crucial IELTS exam. His profile was typical of the students who come to my small school in Bristol. They are generally young professionals, highly motivated with excellent study skills. They tend to have a solid B2-level vocabulary, and a decent command of grammar and usage. However, when they try to use English in real-life situations, they find that their lack of understanding of English pronunciation really holds them back. They know the words they want to use, but they don’t feel confident saying them out loud.

My Polish student and I modelled and drilled and echoed and broke down key words and looked at problematic sounds. It all helped, but at one point I said ‘wouldn’t it be great if I could just show you the shape of this word on a screen, rather than you just trying to copy me?’. Yes, we agreed, that would be brilliant.

The more I thought about it, the less of a crazy idea it seemed. I envisaged a touch screen device, with a soundwave showing the model word and the learner’s soundwave underneath, so that they could see the points of similarity and difference. In a previous role as a marketing strategist in financial services, I’d been fascinated by the visual power of econometric models, and thought something similar could work for pronunciation. 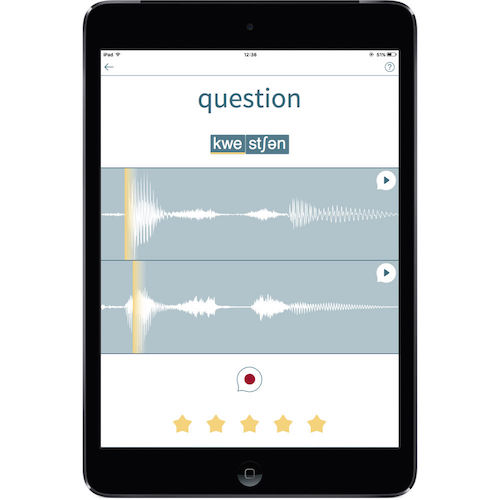 So I started asking myself some key questions:

I did a lot of desk research, trawling through academic papers on pronunciation and ‘Computer Assisted Language Learning’, to understand what had been tried, and looking for clues as to products which had emerged from the research. One of the more useful and recent papers I came across was this one: Why is pronunciation so difficult to learn? (2011)

Eventually, I pieced together some answers to my questions: 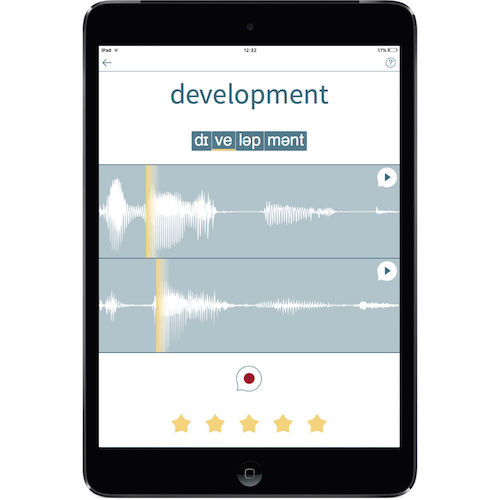 How to build it?

I didn’t have the technical skills myself to build the product, so I had to find a collaborator who could. I spoke to a number of academic friends about my idea and before long, someone said ‘you should talk to Tom about that’. This introduction was the first piece of luck I needed to move the project forward. Tom Mitchell, now my business partner, is a senior lecturer in audio-visual technology – he confirmed that he could build what I had in mind.

I explained to Tom that I wanted to make pronunciation visual: to allow students to see, hear, touch, dissect and analyse both a model word and their own pronunciation. The other elements I wanted to achieve in a first product were:

Tom and I built our prototype and were very encouraged by the initial user testing. We agreed a partnership deal with Oxford University Press, who provide the audio content for the model words, and together, launched Say It: Pronunciation from Oxford at the end of 2014.
I watch learners using Say It on a regular basis at my school: I can see how it helps them, and also how I want to improve future versions (we have lots of exciting new features in the pipeline). Being so connected to our user group is incredibly useful. In this short video, you can get an idea of how Say It works with students:

As well as continuing to develop our EFL product, we are working with academics and researchers to redevelop the technology for use in primary schools (phonics, reading acquisition and spelling) and as a tool for adults who want to improve speech clarity (those who have had strokes, have Multiple Sclerosis, or other conditions which affect their speech).

Say It: Pronunciation from Oxford is available on iTunes. We plan to launch an Android version, with some exciting new features, in the coming 6 months.

In Part 2 of this post, I’ll explain more about the business challenges we faced, and how we got the support we needed to work through them. 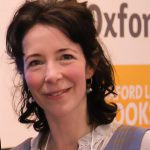 Jenny Dance runs a small English school in Bristol, specialising in Business English and exam training. Before moving into ELT, she spent a number of years working in financial services, at Goldman Sachs and Lloyds. Two years ago, Jenny launched Phona, an Edtech start-up which develops products to help people improve pronunciation and speech sounds.