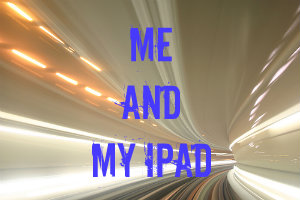 Me and my iPad

In this honest, insightful and helpful guest post Phil Wade shares his experiences of taking an iPad into the classroom …

This is not another of the countless articles or blog posts expressing how revolutionary the iPad is to teaching. Prior to getting one, I had read and read and read so much about how iPads would transform my teaching and what I and my students were missing out on. Eventually, I received one as a present. A year on and I think I have experienced ups and downs and can say that a lot of the ‘buzz’ around them is exaggerated. Yes, they are great but nobody ever seemed to mention the problems. I put this down to sneaky marketing via alleged ‘Apple fans’

I hated my iPad. It wasn’t a computer and it didn’t seem to do much. I am a Google person and I have an Android phone. The iPad didn’t seem to fit in my world and I couldn’t even use projectors as we didn’t have wireless ones. Thankfully, I found, and paid 30 euros for the privilege of getting, a VGA adapter cable. Thus, rendering the portable tablet, well, not portable anymore.

After hours trawling through the Appstore and downloading, I was Googled-up but the apps didn’t have enough functionality. Thankfully, more has been added but it’s still not on a par with a PC experience.

At this point, I started giving lectures and found the joy of using the tablet for the first time. Yes, it looked silly as it had a VGA cable and a headphone jack coming out of it but it was literally ‘plug in and go’.

Next up was Airplay. Projecting your apps and docs on a TV wows any student but there are always technical issues. For example, the one I used was iOS5 and it only worked 3/4 times every day before going black. Why? Nobody can tell me or explain how to change it.

This is where I got app addicted. I ditched all photocopying as I found apps for everything from literature texts to meetings, TOEIC and even medical apps. I started looking beyond the ELT field into content apps. Paper-less meant no feedback docs too so I moved to Google Docs and made templates for lesson notes, end-of-course reports, the syllabus, everything basically.

Showing these notes on a TV through the lesson is very productive and then I can use the doc for an end-of-class review and email it immediately to the student. For private clients, I now have folders for each which contain all the feedback forms, each course outline, reports, schedules, invoices and even MP3 files I record for students on the iPad. The quality is VERY good. When clients are busy, we do phone lessons and I use my tablet. Or we do Google Hangouts using our iPads.

As a corporate teacher, a BYOD philosophy is inherent as all the senior managers and directors have iPads and phones. My pre-iPad life was difficult as I would always hear “it doesn’t work on Apple”. Well, now we speak the same language and students even let me use their WIFI via their iPhones.

This actually works on my Android phone too. It means that I can use the web on my Wifi-only iPad. All you do is turn on the hotspot. Something I was never told in any shop.

iPad teaching is probably easier for Apple fans. If you are buying your first Apple product, it can be annoying until you start thinking Apple.

One thing I always heard was that “there are no viruses or problems with Apple….’. Wrong! My iPad has crashed and rebooted a few times and froze recently then didn’t turn on for 20 minutes. Of course, Apple fans put this down to “third party apps”. From what I gather it is bad apps and Google issues. If I went fully Apple with Pages, it might not happen. In comparison though, I have for more issues with Android.

Would I suggest buying an iPad? Yes, if you are an Apple person but if you have an iPhone, you can do much the same stuff anyhow. I think you can even stream direct to a projector from your iPhone as you do with an iPad.

If you aren’t an Appler, have a think. I have tried some other tablets and they were basically a waste of space. I spend 30 minutes trying to enter my password on one. I know a few people who got them and sold them. Another who has tried one and ten got a laptop. The argument of ‘content consumption vs. content creation’ is still important as I still create most things on my PC and sync them. However, the range of apps of ease of use on the iPad has opened up a new world for teaching, as can be seen on my app heavy screen. I have various folders full of apps for each course and subject (see below).

I have also started giving the iPad to students to use, projecting it on the TV using Airplay and taking notes or reading my plan on my phone. For pron, I record their mouths quite a lot and then compare their pron to the samples on this excellent phonetics site (I haven’t bought the app yet). I also suggest they use that and English Central. I don’t find the Sounds app by Macmillan useful as nobody knows the symbols and they don’t know how to make the sounds.

Yes, Samsung is making strides and yes, allegedly their new tablet is faster but there is no competing with the apps. Most of my Android apps look like they are from a Spectrum. I can also vouch for the construction quality of the iPad, having suffered a heavy bang by an apparent 2 year old Android fan.

Here are a few apps and sites that I use and have found extremely useful:

ELTjam would love to hear from more teachers or trainers about their experiences with EdTech. Whether it’s a website, device or application, how has it helped you and your learners?

Phil is a freelance teacher of BE and ESP in France who is always looking for new ways to improve his teaching with tech.