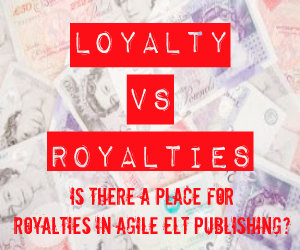 Loyalty vs. Royalties: Is There A Place For Royalties In Agile ELT Publishing?

The long-standing royalty agreement between author and publisher is continuing to be challenged by developments in digital content creation. ELT writer and prolific blogger, Nicola Prentis, takes a look at the implications of this shift. Over to you, Nicola …

ELT’s newest buzzword is not in fact ‘digital’ or ‘agile’, it’s ‘restructuring’. Pearson, as everyone knows by now, is leading the way with a huge restructuring that has had writers floundering, projects awaiting commission (or not) for a year and editors reapplying for their own jobs. The switch to digital is not Pearson’s only move, they’re adopting more agile ways of working and will be focusing on providing education services and viewing everything through the lens off ‘efficacy’.

At the recent MaWSIG conference I was surprised to learn that, contrary to ideas that publishers are raking it in, both they and the author’s percentage of profits from a course book is in single figures. Evidently this is not enough for either party but only one side has the power to rectify it. A massive 47%, goes on production costs so, if the point of agile is to be more efficient and get a product out quicker, money will be saved there. Good news.

Even more good news, digital products don’t require storage, printing or transport costs so will drive savings that could benefit both publishers and authors. In traditional publishing, we’re seeing ebook contracts with much higher shares of the profits going to authors and cheaper products for customers. For example I have an ebook contract with a division of Harper Collins for 25% of the net, rising to 50% if it sells over 10,000 copies, significantly more than I would get on print books.

However, in ELT author royalties are the first thing to go. From digital startups to Pearson, there’s an increasing trend towards paying authors flat fees and cutting writers out of any future earnings, especially if a product is low profit for the company. Writers are understandably unhappy about this so companies will get what they pay for: writers who are willing only to do a specified number of rewrites whose investment in a product’s success ends at deadline.

But are writers’ attitudes to royalties realistic? Or have they simply got used to a system that is actually very strange?

Magazine and newspaper journalists don’t get a share of sales. If you write for Reuters and your article is syndicated to a newspaper, you don’t even get a by-line, let alone any money. Contributing presenter/writers at the BBC are not usually paid for documentaries and certainly have no possibility for future earnings, no matter where that programme ends up.

Screenwriters fare no better with the terms of net proceeds deals defined in such a way that their cut is usually 0%. Even E.L. James got screwed over when she was forced to give up ebook rights in order to sign with a major publisher.

If you want to make a fair share of the pot, start writing songs. The music business has a very different approach to remunerating its content creators. You’ll get a 50/50 split with the publisher plus an endless stream of cash flowing into your pocket from performance royalties, money if it’s used in a film, and money if it’s on a digital subscription service.  Don’t write those songs for ELT publishers though, otherwise Charlie Buys An Ice-cream will only earn you a one off fee for writing it.

But, there’s one critical thing ELT publishers are overlooking.

Songwriters, journalists and documentary writers don’t typically need to go out and sell their product. Music lovers buy for the artist, films and TV are sold on the cast and director and when was the last time you went to a magazine signing? In regular publishing, authors are expected to become the biggest promoter of their own books. And I’m not just talking about celebrity authors. People are fascinated to meet the person behind a book, whoever they are. And once they’ve engaged with the writer, they often buy the book.

I doubt we’re about to see the end of things that resemble course books, they’ll just be available in digital form and have more interactive elements. They’ll still have listening and reading texts, activities and games with language content that needs to be engaging.  In the case of a digital product, however, why would that author not be just as likely to drive on the spot downloads after a session at a school or university?

Obviously Cutting Edge and Candy Crush sell without their creators but I’d bet that any time those creators speak or give training sessions, there are more sales. Who’s going to promote the product better, a group of people who had no say in the content and forgot about it as soon as they met their deadline or people invested from the beginning and with a continuing interest in its success? An invested author could be a walking Qwerty icon.

Although ‘agile’ is agitating a lot of people in ELT, it’s just a strategy for organising projects and doesn’t impact on the greater concern of royalties vs. fees. As agile, efficiency-driven projects become increasingly commonplace, and digital delivery continues to drive down costs and the budget allocated to authoring content, is there more at stake in the ELT world than we thought? Does removing the royalties from the equation remove the loyalty altogether?

Nicola Prentis has a BA in Philosophy, a lifelong pedantry over the English language, an MA in ELT and a CV that spans about ten different countries. She writes Graded Readers for Language Learners (The Tomorrow Mirror, 2013 & As Others See Us coming in 2014) She has written texts for course books but has her own Self Study book – Speaking Skills with Harper Collins out in 2014.

Laurie Harrison wrote a follow up to the above article here. For more on the topic of royalties in ELT, check out Steve Elsworth’s post on the monetary value of material’s writers and publisher, Janet Aitchison’s response.