Things we learned from #iELT17

On the weekend of the 5th/6th May, ELTjam and Oxford TEFL organised the InnovateELT Conference in Barcelona. The theme of the weekend was Power to the Learner and we heard from people across the industry about ways in which we can think more about what learners want and need as they progress on their language-learning journey. By way of a summary, here the ELTjam team share some of their most memorable takeaways from the event and we link to other posts that talk about the conference.

For me, one of the most memorable parts was when Lydia Machova gave her plenary on seven lessons she’d learned from acquiring seven languages. Clearly Lydia is an incredibly proficient learner of languages and speaker of English, but the shift in dynamics was great; a learner of English standing in front of a group of teachers and educators and giving them advice on how to frame language acquisition for their learners. The tips were a mix of things you might expect to come from teachers (‘embrace errors as learning opportunities’) and things that I hadn’t really thought of before, such as ‘simplify the thing you want to say as much as possible so that you have the language to do it’, This shift from a focus on attaining a target level of proficiency to adequately performing a function at a time it’s required is something we need in ELT and it was especially nice to hear it from the voice of a learner.

One consistent theme for me was feedback from learners – how often we solicit it, in what ways, and what we do with the information we learn from it. It felt like the idea of a single moment of feedback – i.e. the post-course evaluation form – was nowhere near enough; instead, several speakers called for us to engage in more meaningful and regular dialogue with learners about how their learning is going, and how they feel about us as educators. I thought Duncan Foord’s plenary offered an interesting insight into what we learn about learners when we ask them the right questions: the thing he discovered that some of his learners at Oxford TEFL most value in their teachers? Their patience, pure and simple. 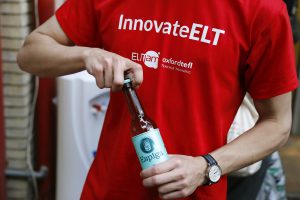 I was blown away by how much the Powerful Questions idea resonated with the delegates at the conference (and on Twitter afterwards) as a new approach to needs analysis. Nick and I presented the set of questions during our PCE session on Learner Experience Design in the classroom as a strategy for facilitating more meaningful conversations with learners, and it really felt like we’d touched a nerve. It seemed like there was a real appetite for a different approach to how and when conversations were being had with learners, and what the expectations of those interactions were. It was great to see the Powerful Questions document being shared and commented on across Twitter after the event, and I’m really looking forward to hearing how they’re being used by educators and learners alike.

One of the standouts for me was the topic of polyglots, represented most obviously by Lydia Machova’s plenary and two talks on the subject. I’ve always thought it bizarre that mainstream ELT has ignored the phenomenon of polyglots, since they are obviously doing something right while ignoring a lot of what we take for granted as the ‘right’ way of doing things. It was great to have this whole other world represented at an ELT conference – the kind of cross-pollination that the insular world of ELT could do with a lot more of. It also really chimed with the conference theme of empowering learners – in this case, empowering them to understand the learning process better and take control of their own learning.

I also enjoyed Geoff Jordan’s talk on how teachers could be getting richer and more meaningful feedback from learners using techniques such as videoing lessons and then observing students, rather than relying solely on the occasional lesson observation carried out by a DOS or fellow teacher.

And, as ever, the wonderful positive atmosphere of the whole event and location made a big impression, too. 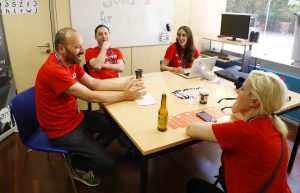 One of the most beautiful ideas I was introduced to when studying Anthropology at Universitat de Barcelona, was the sociological concept of collective effervescence, by Émile Durkheim. We can talk about collective effervescence when a group of individuals comes together and communicates in the same thought and participates in the same action. This shared experience leads to unify the group, bringing up a strong emotion, often euphoria, as if they were in contact with an extraordinary energy.

One of the main takeaways for me at the conference was the pleasure to experience a form of collective effervescence, and to realise the potential positive impact it can have to our lives. The euphoria we lived has the power to motivate and drive new ideas, projects, connexions, and I hope #iELT17 will perform as a trampoline to enable new exciting possibilities. 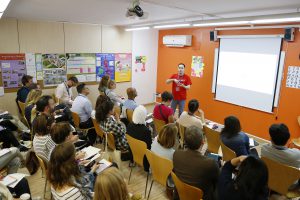 And from the attendees…

Here are the posts that we have from attendees about the event. If you know of any others, or have written something not included here, please let us know…

We’re offering our flagship ELTjam Academy course, ELT in the Digital Age, for FREE with the promo code IELT17! Head on over to www.eltjam.academy to enrol.