An interview with Scott Granville of Chasing Time English

Scott Granville co-founded Chasing Time Productions with his filmmaking partner, Ben Woollen, back in 2008. Since then, they have written, produced and directed multiple short films and had their award-winning work screened at over 50 international film festivals.

Alongside their short film output, they began doing a lot of commercial work with some of the major exam providers associated with IELTS and TOEFL, allowing Scott to draw heavily on his extensive English language teaching background. As time went on, they became increasingly aware of the value of their combined media production and educational expertise for creating something that had broad audience appeal.

They came up with the concept of creating dramatic narrative videos for English language learners, as well as purposeful teaching and learning resources to supplement them. Chasing Time English was born.

Tell us about Chasing Time English in your own words

Chasing Time English is designed to provide English language learners and teachers with video content that is not only useful as a learning resource, but that is also engaging and entertaining drama content in its own right. Fortune is our flagship show. It’s a detective drama designed for adults and young adult learners. What we hope to do is to push dramatic narrative as a viable way for students to either learn independently, or for teachers to use alongside communicative based classroom activities.

What is the problem to which Chasing Time English is the solution?

As a writer with both a filmmaking and teaching background, I’ve always been amazed (or concerned!) that not enough really exists in this area. There is a tonne of content available, and we’re not trying to say that that doesn’t exist, but what I have found is that there is a dearth of high quality, dramatic narrative video for English language learners.

Educators find themselves in a position where they’re forced to choose between using popular TV shows or content from educational institutions. I often use Friends as an example of the former; it’s a great show and there is a lot of value there, but it’s designed for an English speaking audience and it’s not original content. As such, any time you’re using it, you’re really restricted. The other option is the video material that English language organisations create that, to put it kindly, doesn’t really fit the bill of what you’re looking for if you’re watching something for entertainment. So, I think we found an interesting gap in the market. 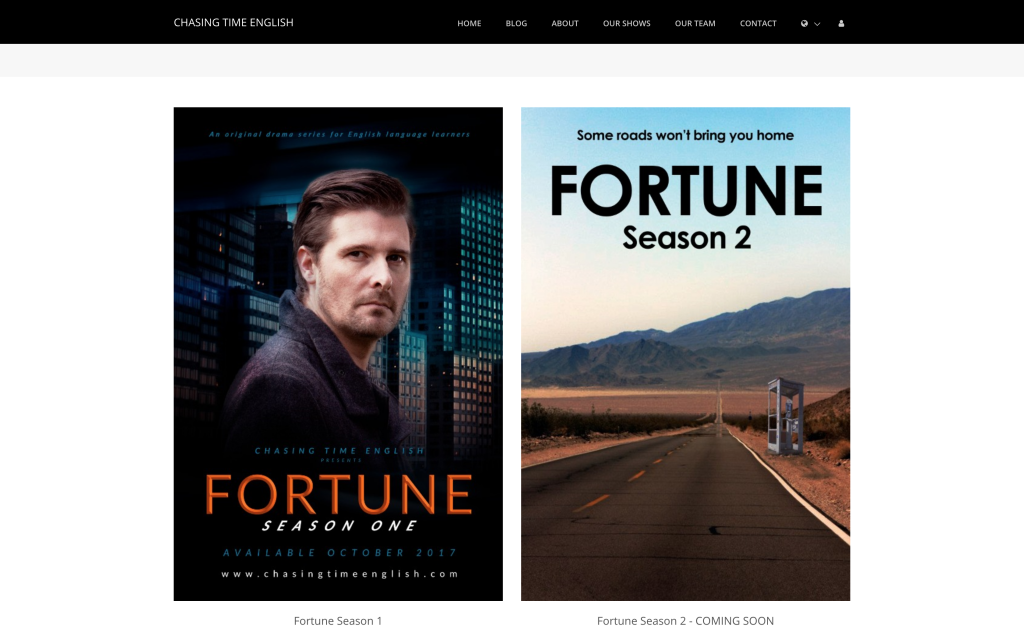 What has the early reaction been?

Really, really positive. We’ve had an interesting roll out. We’re a small team and we’ve been stepping into an area where there’s a flood of information and a lot of competition. But, we know that what we’re putting out there is something quite original. We’re under no illusions that it’s going to take time to establish our brand, what we’re doing, and for teachers and learners to grasp the potential of what we offer. But on the positive side of that, we see it as an opportunity. We know we’ve got a good product and we’re in it for the long term. It’s not going to be an overnight thing; we need people to look at the product, to use it, and then to recognise that what we’re doing does deliver value to them.

What’s next for you and Chasing Time English?

We always said we didn’t want to put out a one off series and we’re doing everything possible to make sure that that is not the case. We have a library of ideas that we would like to progress in the short term. Fortune season two is outlined to a fairly strong stage. We were fortunate enough to raise funds to get season one off the ground, to recreate that production value is another step.

We’ve got something that we can use as evidence of what’s available and what we can do. And we hope to springboard off that in the not too distant future from season two and beyond. We already consider ‘success’ to be completing a single season and to have materials that we think stand up. We’ve been able to put that out there and have had really positive responses already. We do have a longer term strategy that we would like to be operating; if we could get to a B2C model with a subscription based model providing adults, young adults and (eventually) children, I’d be over the moon.

Go to Chasing Time English and use promo code FORTUNE_ELTJAM for a 30% discount for the month of December.

Scott has worked in the media and education sectors for over 15 years in New Zealand, South Korea, Australia and the United States. He has extensive experience and post-graduate qualifications in English language and literature, research and mentoring, as well as in-depth knowledge of cross-departmental and cross-industry collaboration processes. With more than a decade of leading creative projects, and as an award-winning writer and producer, Scott enjoys the collaborative nature of production and education-based work environments.