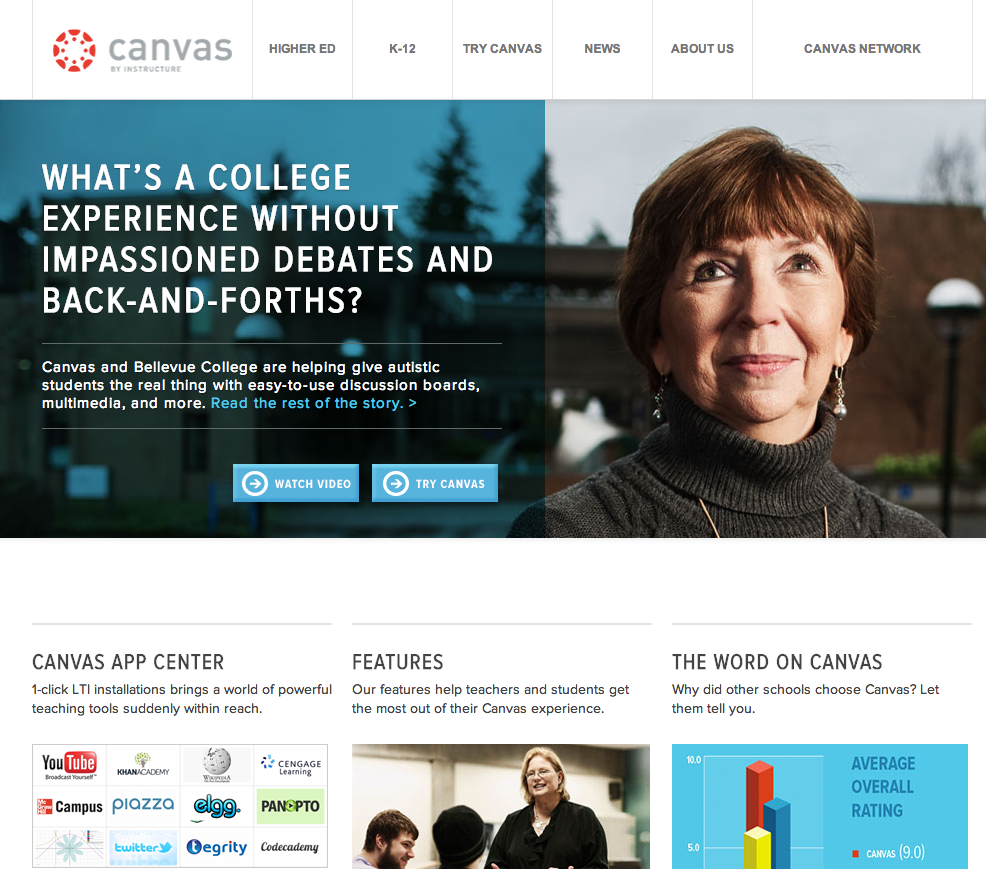 LMS provider Instructure has raised $30m in venture capital funding to further develop the commercial potential of its Canvas LMS. Canvas was not long ago seen as a cuddly upstart competitor to the behemoth that is Blackboard, in a David vs Goliath type scenario. This new round of funding takes total investment in the company to $50m. Not so David-like any more, then. Blackboard has been rapidly losing its dominance of the LMS market, under attack from the likes of Canvas and Desire2Learn. A few weeks ago, Instructure announced the Canvas App Center, which allows various add-ons to be integrated into your course – WordPress, YouTube, Dropbox etc.

The expansion of Canvas is partly due to the MOOC phenomenon – Instructure runs its own MOOCs through the Canvas Network, and with all the hype around at the moment, this is clearly a growth area. You have to think that it’s the rise of the MOOC that’s largely responsible for Instructure’s ability to raise so much money.

Instructure’s stated aim is for Canvas to disrupt the LMS market and the education market in general (plenty of examples in their recent announcement). Canvas is described as “open, easy to use and cloud-native“. That means as an education provider, you should be able to get up and running quickly and easily without a full-on IT department supporting you.

This is what Instructure say about their product:

It’s a breath of fresh air. It’s an educational revolution. It’s a powerful new way to—pardon our optimism—change the world.

If you’ve read my EdTech Disruption post, you won’t be surprised to see this kind of hyperbole about an LMS. Quite a nice one, but still just an LMS!

What does this mean for ELT?

Having been through a period of consolidation (basically because Blackboard was either buying up or crushing its competitors) the LMS market now seems to be offering more – and more interesting – options. In ELT, Moodle is still probably the most commonly used LMS (it’s free, after all), along with publishers’ own platforms being used for English language courses – for example, Pearson’s MyEnglishLab, the Cambridge LMS, Oxford Learn, Macmillan English Campus. Not so long ago, the received wisdom within ELT publishing was that everyone would soon be using an LMS to run all of their courses (not just English), in which case there would be a great reluctance to take an off-the-shelf solution which includes content and platform provided by an ELT publisher – since that would mean getting used to a whole new platform just for the English course. For publishers, that would mean the need to provide their content as SCORM packs that schools or universities could run in Moodle, Blackboard or whatever. Given the increasingly fractured nature of the LMS market, that doesn’t seem to be happening yet, or at least not quickly. Publishers still see the need to provide their own platforms for those language teaching providers who can’t afford a commercial LMS or don’t have the skills or inclination to set up Moodle courses. If they do soon reach the point where content needs to be ‘platform neutral’, then the relative decline of Blackboard and Moodle and the proliferation of new options is going to make life much more complicated, despite the existence of standards such as SCORM and Tin Can.