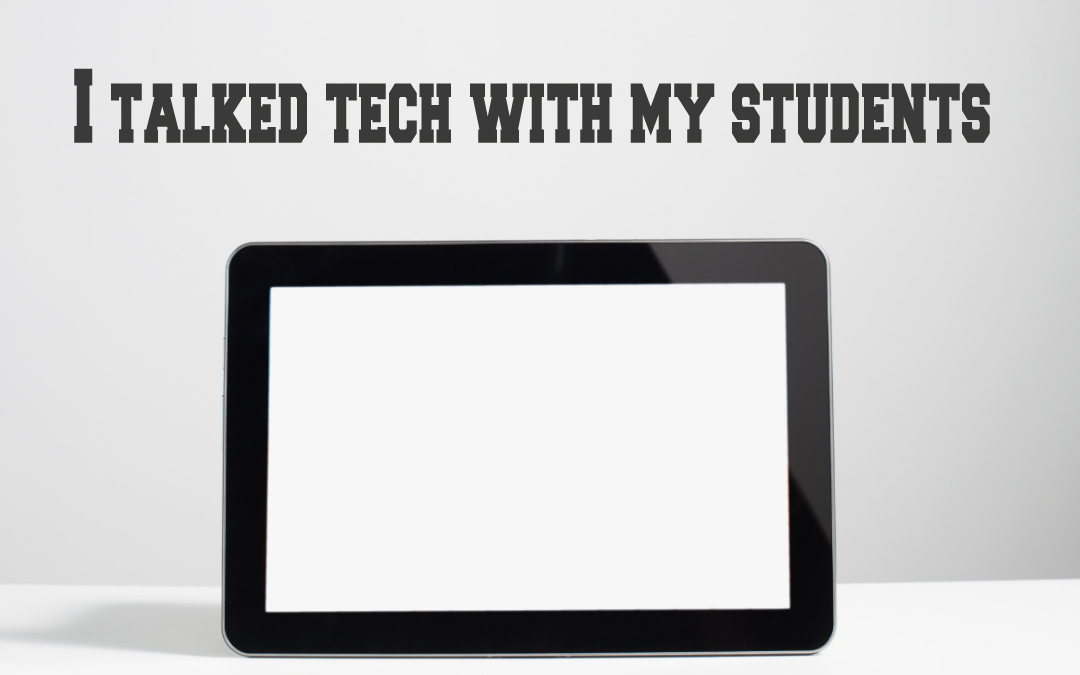 I Talked Tech with my Students

Today sees a guest post from David Harbinson. David has been an English language teacher in Daegu, South Korea, since 2007. He is currently a freelance teacher working mainly for a private language academy catering to adults in Daegu. He can be found on Twitter (@DavidHarbinson) and his blog is http://davidharbinson.com.

Over to you, David…

Korea is a land full of technology. It’s home to Samsung, well-known for their electronic products not least of which includes the Galaxy smartphone series.  Get on any subway in Korea and you’ll be confronted with rows of people staring down at their smart devices playing games, reading news or catching up on last night’s drama. It doesn’t usually matter whether they are old or young, most people, myself included on many journeys, will be fixated on the screen. In a country that has the ‘world’s best education system‘, where technology has become a part of everyday life, it wouldn’t be unreasonable to assume that this use of technology has extended into education.

Back in May, ELTjam invited teachers to talk to their students about technology and language learning. Mike Griffin, another teacher based in Korea, then posted observations from discussions with his students in Seoul, so I thought I’d follow suit. Taking the questions posed by ELTjam I sat down with some of my adult learners to find out how they used technology to assist their language learning. You can see my students’ responses, without much commentary here. I am not an expert in technology. I’m not even an expert in ELT. I’m a language teacher, and what follows is my interpretation of my learners’ opinions with my own commentary added.

I teach at a private language school in Daegu, South Korea. The language school is ‘global’ in that it has a presence in many countries around the world and uses one single curriculum. All of the courses offered by the academy involve a blended learning component, where students spend time learning English in an online multimedia environment before attending face-to-face classes with a teacher. The students are all encouraged to study this online component on computers in the centre, but can, if they wish, choose to study elsewhere via their own computers.

Our conversation started off looking at what materials and technology the students used outside of the classroom in addition to the academy’s materials/resources.

Q1. Apart from this academy’s material, what do you use outside of class to help you learn English?

Q2. What technology do you use to learn English when you’re not at the academy?

A few students mentioned that they liked using resources such as TED Talks, watching English-language dramas or reading English-language news online. This all sounds great, but I really wonder whether or how this helps my students to learn English. Some of them told me that they feel it helps them to improve their listening, which I guess is a fair enough point, especially since many of the students reported that they try (at least at first) to listen/watch without any subtitles.

The thing that I was most surprised about was the lack of variety of smartphone apps mentioned. Admittedly, most of the students said that they used their Korean-English dictionary apps regularly, and a couple of the TED Talks users said that they had an app on their phone, but out of the 21 students I spoke to, only one said that he used an app specifically to help him learn English – a vocabulary learning app.

But then perhaps I shouldn’t be so surprised about it, because although anyone who has taken public transport in Korea will be able to attest to the subway scene I described above, usually sitting in amongst the people glued to their screens you’ll find a university student poring over a book. Sometimes a TOEIC study guide, or OPIc book, or often a book related to their major, but invariably a physical study book. It’s rare to see anyone using their smart device to study, at least in my experience.

What could be the reason for this? In another of Mike Griffin’s posts, he looks at this issue in even more detail and hypothesizes that it could be because students see their devices as tools for fun, not study. Korea is a country that supposedly has the world’s best education system, but that title comes at a price. Koreans work and study very long hours. It’s not unusual for my students to tell me they only get 5 or 6 hours of sleep a night. A large proportion of their waking day is then devoted to studying. So often their phones and smart devices provide a break from work. Their phone time is a respite from the tedium of study. And perhaps it’s this attitude towards study that also curbs the use of smart devices to learn English. “Learning is meant to be difficult.” one of my students told me, “I like having fun, but am I really learning anything?’

I really wanted to probe this issue of apps further, so I discussed it with another group of students later on. The responses I got were that apps were not that useful because, while convenient, it was ‘dangerous’ to study on your phone. By this, students felt that there were too many other things that the phone can be used for and that this would cause distractions from studying. Additionally, while many students acknowledged that apps for language learning must exist, they didn’t know where to start. Some of my students reported that they didn’t really look at what apps to download, because they weren’t confident in selecting apps appropriate for their level. A lot of my students still feel that they needed the guidance of a teacher to provide materials suitable for them.

Discussion then moved on to the learners’ opinions of using technology in the classroom and what students would like to be able to do with it.

Q3. What do you think about using technology in class?

Rarely a class goes by where a student doesn’t get out their phone to try to look up an unfamiliar word in their dictionaries, so I was quite surprised to find that many of my students said that they hadn’t really considered using technology in the classroom.

A few had suggestions for the ways technology could be used, for example to save paper, by providing digital content. But when it came down to it, students once again felt that technology might be more of a distraction in the class. If they have their phones, there is the temptation to chat with friends or check Facebook if the lesson content is not engaging enough. One student even commented that she was worried that introducing too much technology into the class might even reduce the amount of study time while teachers and students get to grips with the tech.

Q4. Is there anything you want to do with technology and learning English, but can’t?

Finally, moving on to the question of what students would like to be able to do with technology. Again, many of my students expressed indifference to the question, or just said that they hadn’t really thought about it much before. The main comments really seemed to revolve around the use of watching dramas, and getting access to subtitles on YouTube so that they can check their understanding.

However, there was one thing that cropped up very frequently. Despite the suggestions that phones are meant to be for fun, or that there would be too many distractions when studying on a phone, a large majority of my students expressed the desire for an app that would allow them to do our academy’s online course component. When I asked them why, the word ‘convenient’ was used a lot. They said it would allow them to study anywhere at any time. When I pushed for a more detailed response, and asked them to explain the difference between this type of app, and the apps that are already available, many students felt that if there was a language course app that was part of a face-to-face course – one that they could use where they didn’t have to choose what to study – it would be very effective.

I wonder then whether the arguments suggesting that phones are only meant to be used for fun, or that there would be too many distractions in using a phone to study, are in fact just excuses. I don’t have that much experience using apps for my own language learning, but of the apps that I have used (Quizlet, as an example), I have found them to be novel and exciting at the beginning, but quite quickly my use of such apps rapidly decreases knowing that I need to provide a lot of the content myself.

In the past, I have suggested tools such as, Quizlet, Anki and lang-8 to my students. At first, they show enthusiasm and interest. When I follow up with students later on, it’s very rare to find a student who has continued to use my suggestions. What all of these tools have in common is that they usually require the student to provide the input themselves and choose what they want to study.

In conclusion, the prevalence of technology here in Korea is difficult to ignore, but it appears that (adult) students are not yet ready to become autonomous English learners through technology. They still want the guidance of a teacher, and are more willing to trust physical books. From my discussions, I do not believe that there would be much resistance to using smart devices to learn English as part of a course. But, I get the impression that, at least in my students’ eyes, it will only be effective if the digital content is chosen for them, and all they have to do is follow along.