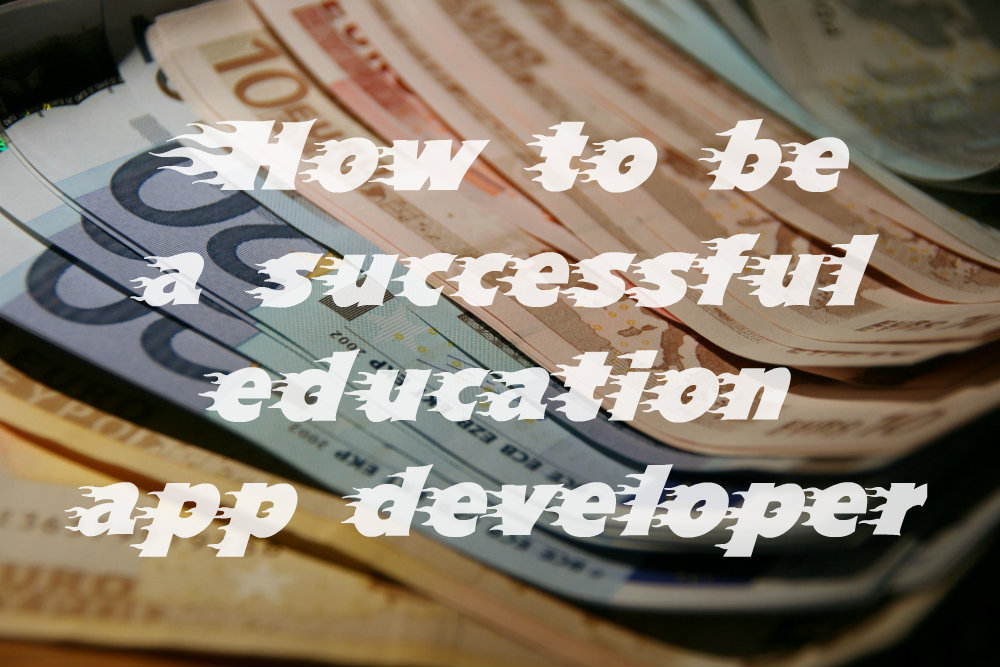 How to be a successful education app developer

When this blog was brand new (nearly two years ago), I stumbled across a post by a French indie app developer called Pierre Abel who was having great success by focusing on educational iPad apps for young learners. As someone who had spent quite a lot of time and effort trying to develop successful ELT apps while working in-house at an ELT publisher, I was interested in how an independent developer had approached it, and whether I could find any useful lessons that ELT app publishers could apply. I thought it would be interesting to see how he’s done since then and whether the same lessons still apply.

By early 2013, Pierre had made over $700,000 from his new-ish educational app business. He got in early by launching an iPad app soon after the iPad was launched, and therefore before the ridiculously fierce competition you now face in the App Store.

Has anything changed in the last two years?
Pierre’s summary of 2014 tells us he’s still doing very well indeed, with a profit of over $500,000 for the year. Despite releasing no new apps, he did release a lot of updates, which helped to keep the apps current and to remind users that they exist. Most of his apps declined in sales, but a couple did really well. The USA accounted for about half of revenue, with volume sales to schools rather than individuals now making up the majority of sales in that market. The best months for sales were January and September/October – so, just after everyone’s got new tablets for Christmas, and around the start of term. Despite his continued success, he says the market is much tougher now, especially for new entrants, largely because it’s simply so hard to get noticed.

He’s starting to develop Android versions of some of his apps, but still only expects 20% of the revenue he gets from iOS.

His overall conclusion is that, despite the difficulty in getting noticed, the market for education apps is still growing; the USA remains by far the most important country; sales to schools are (as he predicted two years ago) becoming hugely significant.

In 2013, I drew 10 lessons from Pierre’s experience that I thought should be relevant to any aspiring ELT app developers or publishers. Here they are again, with updates from 2015. Most of them are still relevant, but there are a few changes:

1. iPad is where it’s at in the Education category.
You can make money on iPhone, but all roads lead to iPad.

2015 update:
There are now over 200 million iPads out there, compared with about 500 million iPhones. However, for young learners, I think focusing on tablets still makes sense, although I’d like to find some more evidence to back it up. It seems logical that children will have access to the family iPad and that parents will be keen for them to use educational apps on it. It seems less likely that a young learner would have their own iPhone. For adult learners in ELT, focusing on phones makes more sense.

2. Don’t bother with Android – at least to start with. It’s still much harder to make money on Android than on iOS.

2015 update:
It’s still harder to make money on Android and in most cases it’s probably wise to start with iOS, but this is less clear cut now. You can’t ignore Android if you’re serious about being an app publisher — at the very least, have a plan in place to develop Android versions once you’ve had some success with your iOS apps. Design your app from the ground up to make this as simple as possible, or use a platform that allows simultaneous development. Another interesting change over the last two years is the rise of Android tablets – even two years ago, the iPad totally dominated the tablet market; that’s just not the case any more. Cheap Android tablets that are actually usable are pretty commonplace.

3. Develop a portfolio of apps – publish a small number of high quality apps, and spend time keeping them up to date and adding enhancements and new features in response to customer feedback and review.

2015 update:
This still seems like the best approach. Your portfolio should contain a number of apps designed to appeal to the same people, but each with a distinct purpose. The chances of developing one app and striking gold are incredibly small. The portfolio approach is much less risky, and offers opportunities for cross-promotion, although you need to very careful how (or even if) you do that if you’re developing apps for young learners.

4. Volume purchases by schools (in the US) are now become a significant source of sales, and growing fast. Therefore, try to make your apps appeal to schools and teachers, as well as to students and parents.

2015 update:
This is more true now than in 2013. Pierre now derives about 30% of revenue from sales to schools. If you’re looking at the US as one of your main markets, I’d be tempted to focus more on the needs of schools than on individual users or parents, since it’s a rapidly growing market where the number of sales needed to create a viable business is much smaller than if you’re selling to individuals.

5. The best form of marketing is to be featured by Apple – this can make or break your app.

2015 update:
Still the case. But how to get featured by Apple? Apple want to feature apps that make them look good. That could mean apps that make inventive use of new Apple features, for example — look at the new features Apple release in each new version of iOS or its latest model of iPhone or iPad, and see if you can work them into your app. Apple is also obsessed with design, so developing an app that’s super-slick and beautiful won’t do your chances any harm. It’s still a lottery, though.

6. Apple has changed its search algorithms to favour free apps – this is yet another reason why freemium is now the only way to go for an app business.

2015 update:
Freemium is still the easiest way to get people to download your app. I’m slightly less convinced these days that it’s the only way to go, though. I’d be inclined to charge for a really high quality app and this is borne out by Pierre’s experience, although you’ll need to be prepared to experiment with different prices to see what works best. Also, bear in mind that freemium only works for certain types of app – ones with a lot of self-contained chunks of content that could reasonably be sold as in-app purchases, for example.

7. Spend a lot of time (and some money, if necessary) on key marketing elements – icon, screenshots, keywords, app description. Don’t just throw something together quickly and spend all of your energy on the app itself.

2015 update:
This one hasn’t changed in two years. Look at the App Store pages of the most successful apps, and analyse their descriptions and screenshots. Craft the screen shots as marketing pieces, with text overlays describing key benefits. Even better, you can now include videos on your App Store page, so you can show off how your app works – much better than a description that most people won’t bother reading.

8. Get your apps reviewed on the right blogs, and pay for expedited reviews if necessary. For educational apps for kids, look at smartappsforkids.com, bestappsforkids.com, appymall.com, funeducationalapps,comtheimum.com, theiphonemom.com

2015 update:
Even more important now, given that the chances of someone stumbling across your app in the App Store are so minuscule.

9. Regular promos – every now and then, cut the price of your apps and let the blogs know. Don’t do this too often, or you’ll look desperate. Try to tie it in with some kind of (at least marginally) newsworthy event – winning an award, reaching 10,000 sales etc.

2015 update:
Still relevant. You need to pull out all the stops to have any chance of getting noticed. Making your app free for a short period can move it up the Education charts, which means it will have a much better chance of getting noticed. Once an app is high in the charts, it tends to stay there. I know of an example where an app’s daily revenue increased ten-fold after a one day free promo and then a price drop from £2.99 to £0.99 for a month. At the end of the month, the app went back to full price, the revenue plummeted again and it then gradually slipped down the charts.

10. Cross-promotion – if you have a portfolio of apps, make sure each one has a page advertising (and linking to) the others. If one of them takes off, it will act as the best form of marketing possible for the others you have available.

2015 update:
Even more important, given how much more crowded the App Store is. But, as mentioned above, be careful how you go about this if your app is for young learners – sensitivity to apps deceiving kids into spending money is rightly much higher than it was two years ago.

Of course, all of the above does assume that your app is actually good, and will therefore generate good reviews and ratings in the App Store. Someone browsing for apps is unlikely to take a punt on something with 1 and 2 star ratings and reviews complaining that the app doesn’t work on the latest version of iOS. Pierre also makes a point of localising his apps for key markets, and I would say this is essential in ELT, especially if your app is for young learners or low-level learners.

I’d add a final point, too, which is not to waste your time and money trying to get into the app market unless you’re prepared to do everything listed above and you already have clear evidence of unmet demand for the type of app you’re planning to develop. The market has become so crowded that anything you invest in developing an app will almost certainly be wasted unless you’ve spent the time and effort before developing it to get clear validation that the world needs your app and is willing to pay for it.

Have you developed an ELT app? How successful was it, and what did you learn from its success or failure? Would you have any other recommendations for aspiring app developers and publishers?