More than a million people a day connect to Duolingo, an app which claims to help people learn a foreign language by guiding them through a series of translation exercises. Here are a few examples: 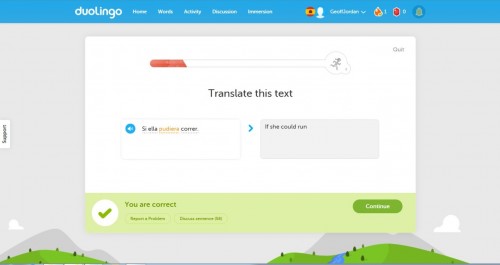 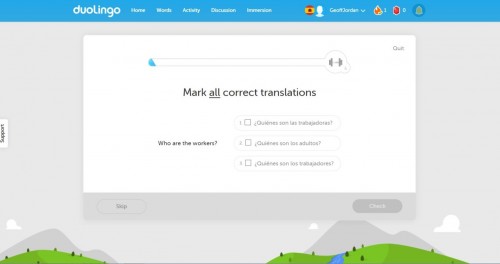 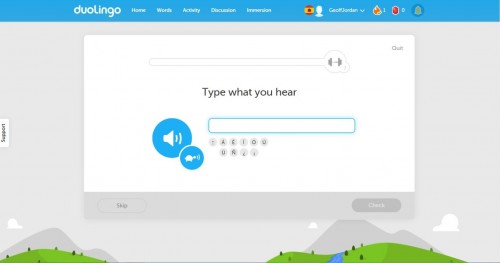 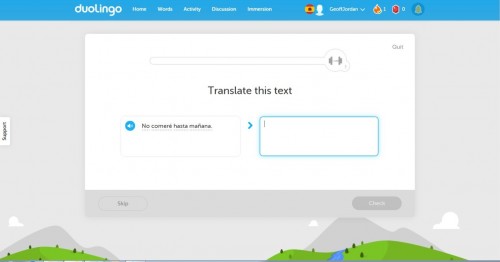 The program is an artful way of getting people to translate texts for free. Clients upload texts for translation to Duolingo and the text is then presented to students who translate it as part of their study activities. When the document is fully translated, Duolingo returns it to the client who pays for the translation. Very clever, but is this a good way to learn a foreign language? First, let’s look at the clamorous case against Duolingo.

The Case Against Duolingo: 1. Tutorial CALL is OUT

Computer Assisted Language Learning (CALL) theorists make a distinction between ‘computers as tutors’ (the computer controls and evaluates the learning process) and ‘computers as tools’ (the computer assists teachers and learners). The Rosetta Stone is tutorial CALL, while concordancers, web browsers and email programs exemplify the tool role. Duolingo obviously takes a tutorial role and thus offends against every tenet of contemporary communicative language teaching.

Even though it’s a thoroughly modern smart phone app, it’s seen by angry hordes of Communicative Language Teaching (CLT) adherents as a throwback to ‘drill and kill’, and an affront to modern educational principles. It is, they say, based on a discredited behaviouristic theory of learning where positive reinforcement through repetition ignores the fact that language learning is an exploratory cognitive process of discovery. It confounds the distinction between explicit and implicit language knowledge, offending even the strong interface position.

It contradicts convincing SLA research evidence that the route of interlanguage development is impervious to the presentation and practice of pre-determined sequences of discrete-point grammar and vocabulary items. It relies on decontextualised, impoverished input and allows only unnatural and degenerate output. It provides no opportunity for the negotiation of meaning. Wolff (1999, p.126) speaks for most CALL experts when he says:

Not only does Duolingo adopt the discredited tutorial role, but its prime vehicle for learning is translation, a pedagogical method confined to the dustbin of history by most contemporary ELT methodologists. The usual objections to using translation are that it encourages a sense of false equivalence between the two languages, and that it impedes automatic and fluent language use. As Guy Cook (2006) says, translation is so out of fashion in ELT that it is rarely discussed, either as a means or an end.

It is simply assumed to be wrong, and has attracted all the usual insults. It is boring, artificial, the last refuge of the incompetent teacher. It has been regularly and explicitly forbidden in materials, curricula and instructions to teachers – sometimes even upon pain of dismissal.

Just for good measure, Krashen (2011) is said to have dismantled the claims made by Vesselinov and Grego (2010) in their glowing ‘Effectiveness Study’ of Duolingo.

But now let’s look at the other side of the story. To begin with, in response to the criticism that tutorial CALL is behaviourist, some SLA research (see Lightbown & Spada, 1999, for a good summary) indicates that tutorial programs can help in the acquisition of vocabulary and grammatical morphemes, in phonological development, and in the acquisition of idioms and fixed phrases. More significantly, many tutorial programs adhere closely to the cognitive/constructivist perspective outlined in Warschauer and Kern (2000). Duolingo involves the conscious manipulation of language forms based on abstract rules, the antithesis of behaviourism; it includes reading and listening comprehension and it provides meaning aids such as the ‘Discuss Sentence’ feature, glossed words and transcripts, which are forms of meaning negotiation.

Furthermore, describing Duolingo as ‘drill and kill’ is unfair. The practice offered involves the conscious, reflective manipulation of language rules and forms, designed to increase linguistic knowledge, accuracy, and fluency. The translation exercises, many directly or indirectly involving the application of an abstract rule or rules, constitute practice but not drill. And anyway, what’s so wrong with repetition and rote learning? They’re artificial. So what? They’re boring and purposeless. Really? Then how come we all take delight in repeating rhymes, jokes and songs a thousand times? As Guy Cook (2006) says ‘In a wide range of genres (from prayers, plays and poems, to sports chants and jokes) repetition and rote learning typify the most enjoyable and valued human language activities.’ More empirically, SLA research shows that repetition and rote learning give learners very positive feelings of progress and that they are effective learning strategies which help turn input into intake.

3. Learners Have Some Control

Thirdly, the criticism that the computer is always in charge in tutorial CALL cannot be levelled at Duolingo, where learners have considerable control over the theme for an activity, and within that theme, various activity types. They can exercise various options such as skipping items, using help screens, discussing correct and incorrect answers with other learners and varying the speed of audio recordings. Generally, the program allows learners to influence the sequence in which they do certain activities and the manner in which they do them.

Most CALL theorists agree with Hubbard and Bradin (2004) that the most promising uses for tutorial CALL are:

These three uses gel perfectly with the way Duolingo can best work. While presently concentrating on the first use, there’s nothing to stop it more fully incorporating the second and third.

As for Duolingo’s use of translation, I recommend Guy Cook’s (2010) book Translation in Language Teaching, which does a brilliant job of reconsidering the place of translation in ELT. Cook points out that translating is a needed skill: ‘real-world’ foreign language use is full of translation. Both socially and at work, successful language learners need to mediate between speakers of their own language and speakers of the language they have learned. In short, there is absolutely nothing artificial about it. As a teaching tool for both grammar, where it compels students to use structures that might otherwise be avoided, and for vocabulary, it has enormous potential and is particularly suited to the realm of tutorial CALL.

While there are inevitably a few questionable translations among the texts, there is no evidence that Duolingo’s translations seek to preserve the grammatical construction of the first language or that they’re misled by ‘false friends’. As for the claim that translation acts as an impediment to automaticity, Cook (2006) comments ‘this is just assertion without evidence – belied by the millions of successful language learners who, having begun the study of a language through translation, go on to become fluent speakers without recourse to an interlingual equivalent’.

Cook concludes ‘The outlawing of translation not only reflects the monolingual mind-set of the English-speaking world, it has also – in a more sinister way – been to its political and commercial advantage. Monolingual native-speaker teachers have been privileged, and the status of ‘local’ experts undermined… Publishers have marketed monolingual textbooks globally. The classroom has become, in microcosm, a world where English is the only language, rather than one integrated with others.’ Amen to that.

Finally, while Krashen (2011) certainly highlights weaknesses in the data presented in Vesselinov and Grego’s (2010) report, the basic claims made by the report seem completely credible to me and I wouldn’t be surprised to see replication studies support their findings.

So, in my opinion, Duolingo works well as a supplementary way of learning vocabulary and grammar. There’s lots of room for improvement in both content and exercise type, and I think more use should be made of longer texts where the pedagogical value of translation and dictation can be used to maximum effect.

What is especially good is the ‘Discuss Sentence’ feature, where learners discuss answers with other learners. In my first Duolingo session I had to listen to a sentence and type what I heard: ‘Mañana no es jueves.’ I was told that my answer was correct and invited to join the discussion of this answer, which already had 18 contributions. Somebody wrote ‘Shouldn’t jueves be plural? If not what is the plural form?’ and somebody else wrote a page long answer which was absolutely marvellous – a million times better than anything Murphy’s Spanish cousin might have written. This kind of collaborative learning makes my cynical old heart sing!

For more ELTjam posts on Duolingo here are some of our initial thoughts, when Duolingo  won Apple’s top app of 2013 , and on its voice recognition capabilities circa 2013.

Geoff Jordan, Ph.D, is semi-retired. He works from home as an associate tutor in the Distance Learning MA in Applied Linguistics and TESOL programme at Leicester University. He has numerous academic publications to his name and writes from his own blog.

24 thoughts on “Geoff Jordan vs. Duolingo”

Learning Included is our newsletter for learning professionals who want to tap into the latest in learning design innovation, research and best practice.

Not sure? Check it out first

If you want to create an online course that makes a difference, we'd love to hear from you.

Drop us a line, and we'll get back to you to discuss your project.

Tell us about your project

Specific project to discuss? Fill in a short form with some info about it, and we'll get back to you to discuss how we can help.

Join 700+ other learning leaders who subscribe to our newsletter.