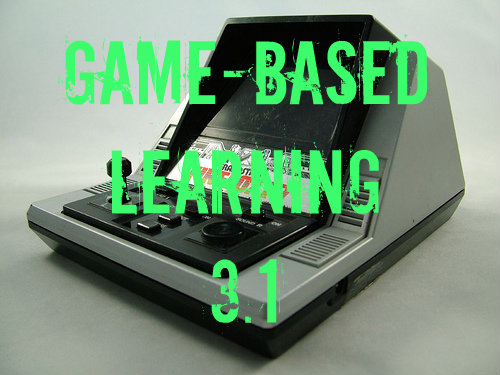 Having looked at some myths about game-based learning and some questions and doubts about it, Dave Dodgson returns with the third post in his guest series, this time looking at the different forms a GBL lesson can take and how we can ensure that gaming translates into language learning and development.

One question often asked about GBL (perhaps the most important question thus demanding its own post separate from last week’s queries) is ‘What does game-based learning actually look like in the classroom?’ As I have previously stated, it’s not just a matter of simply playing and nor does it always require expensive games or equipment. In this post, I will outline four different ways of implementing GBL in the language classroom, two involving direct use of games and two that draw on gaming as a topic to build a lesson around.

Gaming makes for a great topic for discussion. If you have students who are gamers, they will relish the opportunity to discuss their favourite games, gaming systems and issues connected with gaming. I have found that even students who are not avid players still usually have at least one or two games they play or have some opinions about the impact games have on modern life and culture (plus, it is always good to have some opposing ideas to stimulate debate).

In last week’s post, I suggested introducing the topic of gaming by asking learners how games can be useful for language learning and what the pros and cons of using them are. If that got them interested, then there are plenty of other discussion activities that can really get your students talking. Simply posing questions like ‘Why is gaming so popular?’ and ‘Why do some people think gaming is a waste of time?‘ can generate an interesting discussion (especially if I get some learners to play devil’s advocate and speak like they think gaming is a waste of time – great for critical thinking skills).

Another popular topic with my learners is ‘What makes a good game?’ I start the lesson by asking them to name their favourite games, which are written on the board. From there, we brainstorm game genres (useful vocabulary for discussion later on) and components such as graphics, sound, gameplay, controls and so on. I also ask the students to explain why they enjoy these games so much, helping them out with any language they need as they do so.

The next stage is to get them into groups to decide what the common aspects of their favourite games are that make them so enjoyable. I encourage them to dig as deep as possible so if one group, for example, decides graphics are important, I ask them if they like Minecraft, a game with a very retro visual style yet one that is incredibly popular with my kids at the moment. After some discussion and thought, it is interesting that they start moving away from aspects of game presentation instead coming back with more abstract concepts like open-ended gameplay (that is not being forced to follow one particular path to achieve in-game objectives), personalisation (either of characters or the game world), interaction with other players and even ‘free choice’.

Having discussed what makes a good game, another great GBL activity that doesn’t involve any games in the classroom is to make use of game reviews. These can take the form of written reviews on gaming websites or video reviews in which the action of the game can be seen together with some commentary.

Knowing what my students’ favourite games are, I search for reviews of them online (ign.com is a good source as are the games section of Metacritic and gamespot.com), choose one that is popular with the majority of students and display it on the projector in class. We then read through the text together (or just the end of review summary with lower levels) and I ask students if they agree with the reviewer’s opinion or not (it’s important to stress that the review is just an opinion). I then ask them to decide how many points they would award to the game following the format of the review (usually a rating out of 5 or 10 for categories such as graphics, gameplay, and fun).

We then repeat this as a group task with each group choosing a game, finding a review online (it can be a video review of they wish) and comparing it with their own ideas (reviewing the review if you like!) As a follow-up, students could be encouraged to write their own short game review or make a screencasted one if such technology is available.

Now, it is time to introduce some gameplay into the classroom. However, I usually find it’s best to wait before putting the games in the students’ hands (otherwise, they might still be more focused on playing than learning and doing classroom tasks). And so, the first time I use a game in class, I am usually the one who plays. 🙂

With my laptop hooked up to the class projector, I show them a game I have been playing recently and explain that it is a bit difficult and I am stuck at one point (this doesn’t have to be a place in the game where you are actually stuck but we can tell a little lie here for the sake of some language learning!) I then play through the game, describing the game, the objectives and the control system as I do so (most recently, I have done this with a platform game called Limbo – it’s a small budget independent game so most students haven’t heard of it before).

I then come to the place where I am ‘stuck’ (in this case, I need to get past a big spider without getting killed). I attempt to pass and fail and then ask the students for advice. They make suggestions (using lots of language like Why don’t you…?, You should try…., It might help if… and so on). I then try out their suggestions and see which one works.

If they can’t suggest anything to help me progress, we do an internet search for a walkthrough (a guide explaining how to get through levels and complete objectives in a particular game). Just like the reviews, these can take the form of written texts or video screencasts with commentary (you should be wary of any inappropriate language use in the videos, however, so it’s best to pick out one or two before the lesson). The students then either read the text or watch the relevant part of the walkthrough to find the solution (a great comprehension activity with a real purpose) and then retell it to me. I try my luck and see if it works.

The final overview (for this post, of course – there are many more ways to implement GBL in the classroom!) is one that puts the game in the learners’ hands. For this example, I will use a tablet/smartphone app as an example both because it’s available for free and mobile devices provide the easiest way to get large classes of students playing simultaneously.

The app is called Can You Escape? (available free on iTunes and Google Play) and the aim of the game is to find the code to unlock the door in a sealed room using the objects and clues around you. In order to maximise language output, students should play in pairs or small groups and the teacher needs to make it clear that the students are to play together and discuss what to do in the target language (especially important if you have monolingual classes). I have a ‘three lives’ rule for this – if a group starts speaking in L1 too much, they lose a life and if they lose three lives, it’s ‘game over’ (basically, GBL with a sprinkling of gamification.)

Once I have demonstrated and explained the game (doing level one as a whole class activity is a good idea to make sure all the students know what to do), I set the students up in groups and get them to work through level two. I go round and monitor, helping out with language as needed (this game is great for home and furniture vocabulary, prepositions of place and commands). I ask the students to make notes of what steps they took to solve the puzzle so they can report back to me when the level is finished.

In the case of a group getting stuck, there are a few options. One is to recycle the activity suggested above and direct the students to a walkthrough solution (Can You Escape? now has video walkthroughs built into the game for easy access). Another idea is to extend the cooperative play beyond one group and ask another group who have successfully completed the level in question to help out, either by telling their friends what to do or lending them their notes.

After the students have played for a while, I set them a writing task to create their own step-by-step walkthrough guide to completing a level of their choice. This can be simplified to straightforward instructions for lower level learners or it could take the form of paragraph writing for more advanced students. Once this is done, groups exchange their walkthroughs and make suggestions for improvements both linguistically and in puzzle-solving terms. If each group tackles a different level, a guide to the whole game could even be compiled and perhaps published online, giving the students a greater sense of purpose and audience for their written work.

I hope that has given a few clear examples of what a GBL class can look like. If you have any other ideas or experiences to share, leave a comment – I would love to hear them!

Dave Dodgson is an EFL teacher working with young learners in Turkey. He has always had an interest in the use of technology to enhance the learning experience and has recently started to look into how computer games can motivate students and promote learning. He is the blogger behind ELT Sandbox (eltsandbox.weebly.com) and also tweets about gaming in ELT (@eltsandbox) as well as running a Facebook page on the subject (facebook.com/eltsandbox1). He also runs a ‘regular’ teaching blog (davedodgson.com).
Feature Photo Credit: unloveablesteve via Compfight cc. Text added by eltjam.