FluentU: A review by Philip Kerr

FluentU, busuu, Bliu Bliu… What is it with all the ‘u’s? Hong-Kong based FluentU used to be called FluentFlix, but they changed their name a while back. The service for English learners is relatively new. Before that, they focused on Chinese, where the competition is much less fierce.

At the core of FluentU is a collection of short YouTube videos, which are sorted into 6 levels and grouped into 7 topic categories. The videos are accompanied by transcriptions. As learners watch a video, they can click on any word in the transcript. This will temporarily freeze the video and show a pop-up which offers a definition of the word, information about part of speech, a couple of examples of this word in other sentences, and more example sentences of the word from other videos that are linked on FluentU. These can, in turn, be clicked on to bring up a video collage of these sentences. Learners can click on an ‘Add to Vocab’ button, which will add the word to personalised vocabulary lists. These are later studied through spaced repetition.

FluentU selects the best authentic video content from the web, and provides the scaffolding and support necessary to bring that authentic content within reach for your students.

It seems appropriate, therefore, to look first at the nature of that content. At the moment, there appear to be just under 1,000 clips which are allocated to levels as follows:

It has to be assumed that the amount of content will continue to grow, but for the time being, it’s not unreasonable to say that there isn’t a lot there. I looked at the Upper Intermediate level where the shortest was 32 seconds long, the longest 4 minutes 34 seconds, but most were between 1 and 2 minutes. That means that there is the equivalent of about 400 minutes (say, 7 hours) for this level.

The actual amount that anyone would want to watch/study can be seen to be significantly less when the topics are considered. These break down as follows:

The screenshots below give an idea of the videos on offer: 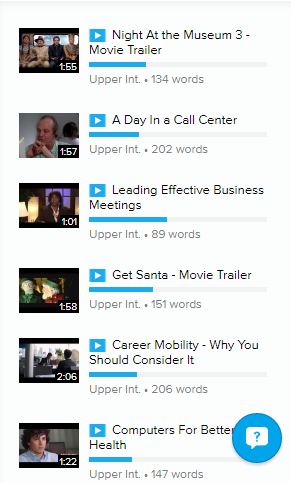 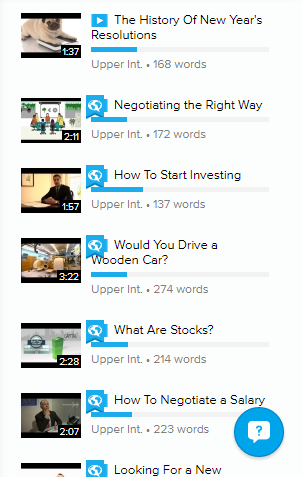 I may be a little difficult, but there wasn’t much here that appealed. Forget the movie trailers for crap movies, for a start. Forget the low level business stuff, too. ‘The History of New Year’s Resolutions’ looked promising, but turned out to be a Wikipedia style piece. FluentU certainly doesn’t have the eye for interesting, original video content of someone like Jamie Keddie or Kieran Donaghy.

But, perhaps, the underwhelming content is of less importance than what you do with it. After all, if you’re really interested in content, you can just go to YouTube and struggle through the transcriptions on your own. The transcripts can be downloaded as pdfs, which, strangely are marked with a FluentU copyright notice. FluentU doesn’t need to own the copyright of the videos, because they just provide links, but claiming copyright for someone else’s script seemed questionable to me. Anyway, the only real reason to be on this site is to learn some vocabulary. How well does it perform? 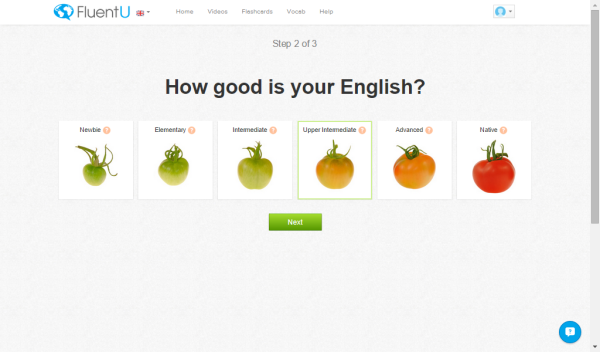 Level is self-selected. It wasn’t entirely clear how videos had been allocated to level, but I didn’t find any major discrepancies between FluentU’s allocation and my own intuitive grading of the content. Clicking on words in the transcript, the look-up/dictionary function wasn’t too bad, compared to some competing products I have looked at. The system could deal with some chunks and phrases (e.g. at your service, figure out) and the definitions were appropriate to the way these had been used in context. The accuracy was far from consistent, though. Some definitions were harder than the word they were explaining (e.g. telephone = an instrument used to call someone) and some were plain silly (e.g. the definition of I is me). 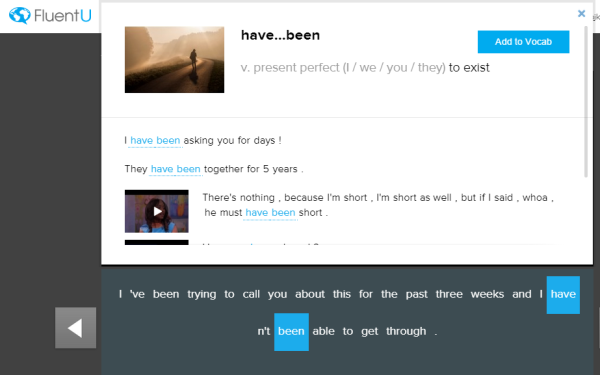 Some chunks were not recognised, so definitions were amusingly wonky. Come out, get through and have been were all wrong. For the phrase talk her into it, the program didn’t recognise the phrasal verb, and offered me communicate using speech for talk, and to the condition, state or form of for into. 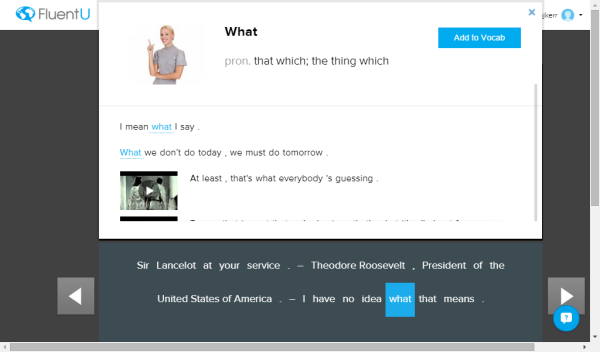 The example sentences don’t seem to be graded in any way and are not always useful. The example sentences for of, for example, are The pages of the book are ripped, the lemurs of Madagascar and what time of day are you free?. Since the definition is given as belonging to, there seems to be a problem with, at least, the last of these examples!

With the example sentence that links you to other video examples of this word being used, I found that it took a long time to load… and it really wasn’t worth waiting for.

After a catalogue of problems like this, you might wonder how I can say that this function wasn’t too bad, but I’ve seen a lot worse. It was, at least, mostly accurate.

Moving away from the ‘Watch’ options, I explored the ‘Learn’ section. Bearing in mind that I had described myself as ‘Upper Intermediate’, I was surprised to be offered the following words for study: Good morning, may, help, think, so. This then took me to the following screen: 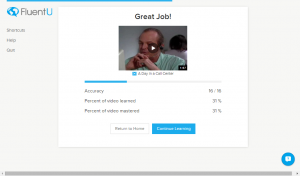 I was getting increasingly confused. After watching another video, I could practise some of the words I had highlighted, but again, I wasn’t sure quite what was going on. There was a task that asked me to ‘pick the correct translation’, but this was, in fact, a multiple choice dictation task. 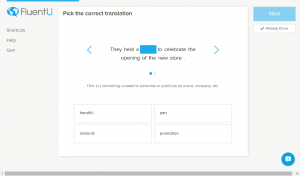 Next, I was asked to study the meaning of the word in, followed by an unhelpful gap-fill task: 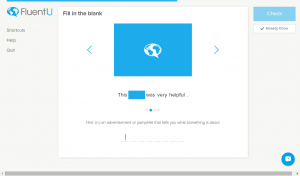 Confused? I was. I decided to look for something a little more straightforward and clicked on a menu of vocabulary flash cards that I could import. These included sets based on copyright material from both CUP and OUP and I wondered what these publishers might think of their property being used in this way 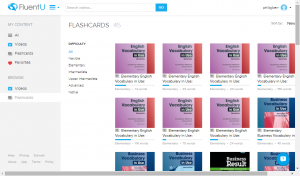 FluentU claims  that it is based on the following principles:

Mastery Learning: FluentU sets students up for success by making sure they master the basics before moving on to more advanced topics.

Personalization: Each student’s FluentU experience is unlike anyone else’s. Video clips, examples, and quizzes are picked to match their vocabulary and interests.

The ‘individualized scaffolding’ is no more than common sense, dressed up in sciency-sounding language. The reference to ‘Mastery Learning’ is opaque, to say the least, with some confusion between language features and topic. The gamification is rudimentary and the personalisation is pretty limited. It doesn’t come cheap, either. 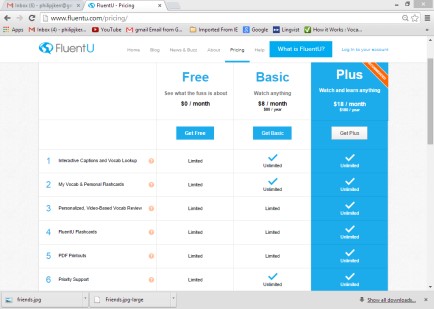 This post was originally published on Philip’s blog Adaptive Learning in ELT on January 5th, 2015.

2 thoughts on “FluentU: A review by Philip Kerr”