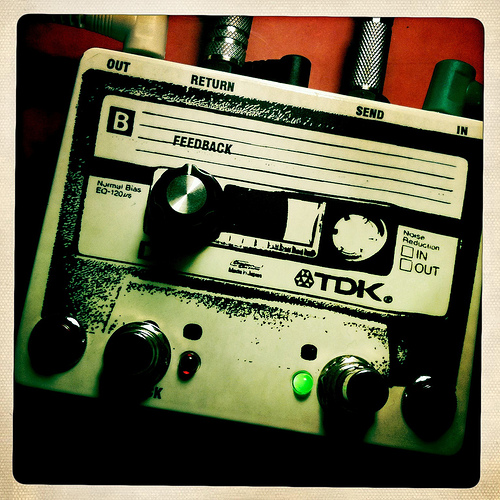 ‘Feedback’: it’s the unwanted shrill shriek that announces a guitar or microphone as being too close to the monitor. It’s the ear drum-splitting whinny that can stop a band in its tracks and send the audience scurrying, fully riled, to the bar.

It’s also a decisive and highly effective tool for motivation and self-direction.

In a previous blog post on gamification we mentioned the core principles of a successfully gamified environment (as identified by Gamification Corp): Friends, Feedback and Fun. Feedback, in order to be successful and sustainable, is itself dependent on a continuous loop of activity:

Whether you’re in a classroom, working for an international ELT publisher or immersed in a gloriously designed video game, this loop is what you depend on for directing your energies in the most productive way  possible. What’s more, this loop is available in two distinctive versions: positive and negative.

Take a traditional classroom, for example; with only a positive feedback loop in operation (if that) then it might be fair to suggest that the most eager and able students in the room will be the ones providing the answers, being praised for doing so and then feeling empowered to continue doing it. Meanwhile, the less confident or able learners will gradually feel marginalised and disinclined to contribute to the lesson’s interactions as they see the pace and level of the lesson accelerate away from them. The main resource in that context (teacher input and attention) is being monopolised by the minority.

[Aside: I can honestly admit to perpetuating this positive loop disequilibrium during my early teaching days. The stronger, more vocal students often become the ones that I would refer to in the first instance. As a new teacher it was often easier to feed into the interactions that needed less correction and…, well,… work. Confession over.]

This concept may be a familiar from Malcolm Gladwell’s Outliers where, amongst other things, he suggests that the reason a disproportionate number of top level ice hockey players have birthdays in January and February is that youth leagues pick teams according to calendar year. This means that children born early in the year are almost a year older (and accordingly more mature, bigger and stronger) than those born at the end of the year – giving them a small but significant advantage. This sets off a positive feedback loop, as they are identified as superior athletes, praised, given extra coaching, more opportunities to play against stronger opposition etc. Gladwell calls this “accumulative advantage”.

What might be necessary in our classroom example is a negative feedback loop of some kind; some kind of mechanism that helps to marshall the key resource (teacher attention) so that the other, less prominent learners are given more of a chance to contribute. A negative feedback loop is a loop that reduces certain behaviours. So, in the example of the classroom, the more ‘vocal’ a learner is the harder/more challenging the lesson needs to become for them. They’re getting the answers right, which is terrific, but they need to be shown that it gets trickier for them as they do so; perhaps there are fewer occasions/opportunities/reasons to tap into the teacher resource as they proceed. Perhaps they are given more self-directed activities or interactions to collaborate on, or are maybe tasked with coaching a group of their own peers in the room.

In his fantastic blog post on feedback loops and employee motivation, Andrzej Marczewski suggests that the interplay of positive and negative loops is an effective strategy for generating engagement, something he demonstrates effectively in terms of a gaming context.

What games are capable of delivering (and what ELT companies aren’t, and what classrooms need to master) is immediate, relevant feedback. A gamer can see instantaneously see the consequences of their in-game actions and make corrective decisions accordingly. In their report ‘Teaching In a Digital Age‘ Pearson picks up on how tech is enabling what it refers to as ‘rapid’ feedback in many education environments. A case study conducted with Florida Virtual School revealed that teachers were using IM apps, text messages and good ol’ phone calls to make themselves available to their learners whenever they were needed. Furthermore, the online nature of the learning content and activities means that the learners were able to get a clear and immediate sense of how they were faring with the learning objectives.

I’d be intrigued to see how these concepts could be applied to ELT publishers and their various business objectives. How can they best secure immediate and meaningful feedback from the teachers and learners who are actually using the final product? Surely a bi-annual market research trip to one or two schools isn’t as rapid as it ought to be. That’s just vapid feedback rather than rapid. There needs to be some agility in observing how published/delivered products are actually received as well as how they are produced in the first place. It’s possible with online platforms to collect and collate tonnes of data on user behaviour, preferences and comparative strengths, but where in that treasure trove of information is there a reaction to the final product ? What is it in those numbers that lets you know that the learner is happy with what they’ve experienced?

Somewhere in that tinny whine is a Hendrix-sized roar waiting to be unleashed.