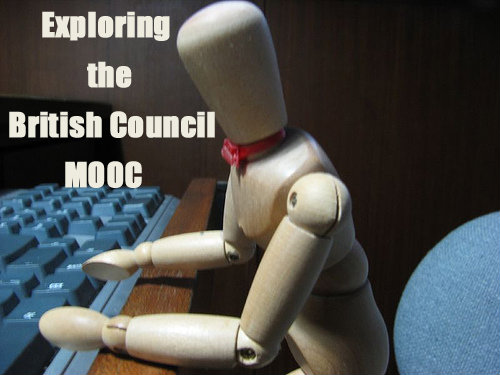 Either ELTjam and its community of commenters can see the future, or the British Council closely followed this post from January 2013 when they created their 6-week course Exploring English Language and Culture in partnership with FutureLearn.

There’s one critical difference, though. ELTjam thought an ELT MOOC probably wouldn’t work. The British Council made sure that it did. Although, as we’ll see, that does depend on your definition of ‘work’.

The course, which over 100,000 people signed up for, demanded two hours of students’ time per week and made use of two unscripted videos, aimed at around B1 level. Following up the videos were comprehension, grammar and language activities; chat forum discussions around the topic; and a final written activity – also to be submitted via the forums. A £24 optional participation certificate is available for anyone completing 50% of the course. Moderators were on hand to interact with participants, both conversationally and correctively, much as a live teacher would, but, more importantly, students could interact with each other. And they did – thousands of them.

Not 100,000 of them, though. The typical attrition rates are evident in the number of comments in the forums. I took the figures from the final assignment discussion boards as a very rough indicator of participation.

Let me stress how rough this is before anyone goes all ‘statistical research’ on me.

Anna Searle, in an interview with Womanthology, published roughly halfway through the course, said that 55% of people who signed up had started the course. So let’s say 55,000 people signed up actually started. The number of comments for the final forum discussion at the end of Week 6 were:

So, even allowing for 5 more weeks post-course participation at 1,000 per week, active numbers seem to be drastically reduced. Nevertheless, I’d count this as a course that had ‘worked’. Those numbers are impressive. How many go on to buy a certificate I’d guess at significantly lower than those completing the course, but I doubt that was the aim of the British Council. What’s more, the forums I skimmed through were brimming with enthusiasm. And feedback, as recorded on the site, was eulogistic:

So positive was the reaction to Britain and British culture, explored through topics like British music and literature, Visiting Britain, English as a Global Language and Entrepreneurship (with British businessman Richard Branson), that I’m amazed we don’t do better at Eurovision. The course was pure advertising for Britain and studying with the Council, even to the point of camera angles which filled half the screen with their poster. (Forum moderators were also quick to link to other Council products like their apps or the forthcoming MOOC aimed at teachers.) But this is another way in which it can be said to have worked, since this is in line with the Council’s mission. Far from coursebook publisher concerns about producing a multi-cultural, globalised spread of content, thousands of people loved every second of learning about ‘this green and pleasant land’.

Although the topics, aside from Entrepreneurship, are fairly same-old (the dreaded Environment even features), I only saw one negative comment. The literature topic was mentioned often as a favourite, and people loved the social interaction. From my skimming I barely saw anyone talking about grammar and vocabulary or asking for more quizzes and tests. Except, that is, teachers:

Now, all this ties in very closely with what the commenters on Nick’s post thought 18 months ago: The best MOOCs for learning English would be ones that taught a topic of interest in English, rather than English itself. I’d go one step further and say more EFL materials need to be content-rich and teach real topics instead of blandified language and grammar vehicles. And the literature aspect? Graded Readers. I’ve said a million times how under promoted and underutilised these are.

The ELTjam voices of the future also knew that interactivity would be a key to a MOOC’s success:

… these constraints [would be] blown out of the water when MOOCs take on ‘social learning’ elements that allow users to participate in communication with their peers (in effect, allowing for unlimited student talking time). Social learning will, among many other things, create opportunities for peer teaching and review (two elements that are exactly in line with modern ELT pedagogy) which will bring a much-needed new dimension to digital learning, and, in my view, allow it to flourish like never before. Robert Vernon, ELTjam commenter.

The British Council course managed that as well as possible given the constraints of moderator time and capacity. Discussions looked lively and, at least during the week of a module going live, highly interactive, with people able to ‘like’ and respond to others’ posts. There was even some peer correction going on. This is the point where you might want to asses the MOOC under slightly different terms. Was it truly an ELT MOOC? That is, did it teach language?

Obviously, I don’t have any data to prove or disprove this. But it seems unlikely that 12 hours can make an awful lot of difference to anyone’s level. The grammar topics were things like passive, relative pronouns, ‘so’, -ing vs infinitive, ‘make’ vs. ‘do’ – subjects that get taught over and over with often no visible effect (in my classes at least!). For a student with no other access to lessons, it can’t have hurt, though. One thing that seemed to be the case from the level of language in the forums was that many of the students had a much higher level than B1 anyway, so even if you were to assess improvement somehow, you probably wouldn’t see much change in the measurable elements like grammar in right/wrong test questions. However, the British Council set expectations carefully. It wasn’t ‘learn English’ but ‘explore English’ so, on its own terms, it wasn’t a true ELT MOOC.

The last way in which the course can be said to have ‘worked’ is the massive quantity of freely given data that can be mined from it. The amount of qualitative data in the first forum discussion could feed several Second Language Acquisition PhDs alone. I could have written my MA ELT dissertation on responses to a question about learners’ feelings of identity when speaking English. Add to that the stats on participation by country, gender (predominantly female apparently), length of study time, preference for task type, grammar and language strengths ad infinitum.

What do the British Council have now? Invaluable data for designing a course that people might pay for and where to market it. Oh, and the email addresses of over 100,000 people who might want to sign up.