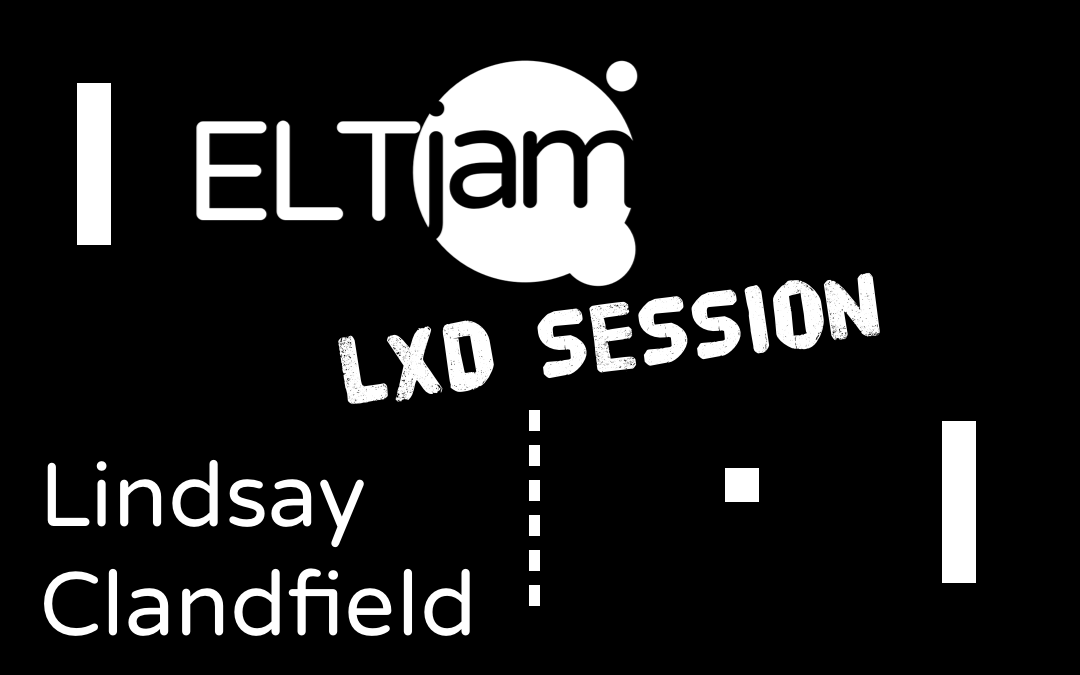 Lindsay Clandfield was one of the four speakers that addressed the topic of Learner Experience Design (LXD) at our ELTjam Session on the 13th April. His 10-minute spot covered the growing influence of video games and the surprise survival of the fitness industry. Here’s how Lindsay tied it all together with ELT …

I was asked to talk about the human part of the equation in learner experience. So, for this, I want to talk about interaction. That’s something I’ve been quite interested in recently, and stuff I’ve been developing and beginning to talk about.

The other kind of interaction is human-to-human interaction. I think that ELT EdTech has been getting rather obsessed over the former and losing sight of the latter. It’s going to become a problem as more of our EdTech is getting better and better developed. But, if it’s focussing more on machine-human interaction and less on human-human interaction, I think we’re missing out on stuff.

What I wanted to talk about were two different fields, and how they are approaching, with technology, human-human interaction and human-machine interaction.

The first field that I want to talk about is video games. It’s very interesting reading about how broadband internet has widened over recent years and how consoles like Playstation, Xbox and so on now allow for broadband connectivity so that many people can play together. The whole idea of ‘multiplayer’ has become huge in video gaming – almost to the extent that it’s started to threaten the single player experience.

The biggest games that have been coming out – what they call in the video game industry “triple A” (AAA) games – include Destiny (one of the biggest launches last year on Playstation 4) Titanfall, World of Warcraft, and Minecraft. All of those have a very big human-to-human interaction part, either through multiplayer, or people videoing themselves or watching other people’s videos of themselves playing it. If you have kids, I’m sure you’ve caught them watching videos of other kids playing games or doing Minecraft. In fact, some of these games are purely multiplayer. They’ve got rid of the single player experience, and it’s only meant to be played with other people.

ELT EdTech, if we use a video game metaphor, is like Pong.

I’m sorry. Sometimes our EdTech can be a bit more attractive than that, but I don’t think we will have the budget to meet the kind of single player experience I was talking about before. We have a better chance of creating a meaningful multiplayer experience though.

The world of fitness

The second industry I wanted to talk about is fitness.  How many of you have ever used a fitness app to track your run? You may have a step tracker, I have one as well. I did some reading on fitness and what industry felt most threatened by these devices when they came out. It was gyms and fitness centres. Gyms, around three or four years ago when tracking apps and devices started really picking up, were saying, “Shit. We’re gonna lose. Why would anyone come to a gym? They can now have the coach in their ears. They go jogging and the ‘Couch to 5K’ programme will get you training. You can do a pilates class with videos that you watch by yourself in your living room in your own time,” and so on.

So, they were all expecting that this technology would kill gyms. But, in 2015, The Guardian reported that gym membership in the UK was up by 44%. The State of the UK Fitness Industry Report revealed in 2015 that the fitness industry was in very good health – had more clubs, more members, and a greater market value than ever before. According to them, 1 in 8 people in the UK are members of a gym, an all-time penetration rate high of 13.7%.

I think that the tech that can permit meaningful online interaction doesn’t have to be complex. We don’t have to build the World of Warcraft for ELT. We don’t even have to build  a Minecraft. I think the tech for meaningful online interaction is very simple. It’s text chatting, which has never gone away. Text chatting is what we were talking about in the 1980s, right? And yet Whatsapp today is one of the top ways for communicating with people. It’s voice to voice tech as well that’s popular. Both of these things already exist, we don’t have to try to invent them.

I’ve been watching ELTjam, and I’ve been watching the buzz that they got out of the two apps that they did. The first one was Flovoco, which was a vocabulary training app and featured machine-human interaction. You learned your words and you levelled up through that. The second one was Ask Me English, which was just a couple of weeks ago. So, Flovoco was a human-to-machine interaction, Amé was human-to-human interaction. They called it a bot, but it wasn’t at the beginning; actual people were answering the questions.

Ask Me English (Amé) was the one app that Nick said was the best thing, bar none, that he had made. So that’s already telling me something. That app is using technology that was already there. It’s human interaction. I’m glad it’s not a bot, actually, because of what happened to Microsoft. Microsoft created an AI bot that started spouting racist stuff, so I worry that if you made an app like Amé into an artificial intelligence thing, pulling things from the net, you’d end up getting most people swearing.

To bring it to a close, when I’m talking about interaction, I’m making a call for more of the human-to-human interaction via tech, and less of the machine-human interaction. I think we should stop focussing on (and pouring so much of our resources into) things that students have to do by themselves without a teacher, without classmates, without other people. We all know that they don’t do homework, so why are we giving them more, ‘better’, shinier homework? It’s not working. We’re focussing loads of energy in LMSs, in online automated marking, in recoding yourself and uploading it for assessment, in online videos that you watch at home by yourself.

These all have their advantages and their place. But we’re doing them at the expense of students being able to communicate with each other. Maybe we should start focussing on material and tools, and on building a user design that enables good classroom use and communication among peers. Maybe, with tech like this, we’ll mimic what happened in the fitness industry and lure students back into classes again. We’ve been developing a language teaching methodology over the past forty years that recognises the value and importance of human-to-human interaction and communication. Let’s not undo all that good work now.