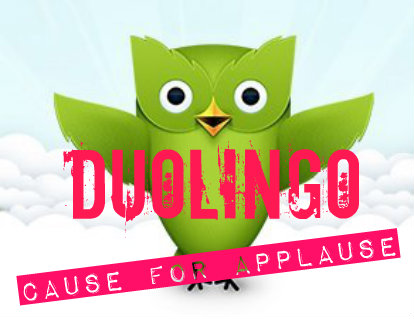 Duolingo: Cause for Applause

You couldn’t make it up; the very same day we blogged about Duolingo’s language learning app Apple announced  it be the free iPhone app of 2013. Duolingo, which has been downloaded 10 million times from the appstore, has been recognised for it’s considerable contribution to mobile language learning. Ironically, our blog post flagged up an issue with the speech recognition that we noticed through demoing the application; it doesn’t work. Still… free’s free and the UI could pretty much write the book on “sticky” learner experiences.

Having said that … what are they basing that accolade on? Numbers of downloads? Surely not. Brain-meltingly addictive Candy Crush was the most downloaded free app of 2013 (as well as being the highest earning app, a testament to the effectiveness of a well-thought out freemium strategy). [Note from eltjam: if you’re considering downloading this app to see what the appeal is, make sure you’ve cleared your schedule for the next eight hours…]

Is it the quality of learning that it promotes? Maybe, but I don’t know how Apple would be in a position to assess how competent and confident Duolingo’s learners are. However, in a post back in the first half of 2013 we discussed the report produced by Duolingo claiming that learning through their platform enabled learners to cover material quicker than those learning in college classrooms. The contributing factor, it emerges, is learner motivation; a learner will feel more engaged and eager to apply their effort if it’s being used in a learning framework that is fun, rewarding and provides clear evidence of their improvement. Who knew? Even so… I’d be very interested in seeing how a Duolingo learner differs from a classroom-/teacher-developed learner. What can they do that ‘traditional’ learners can’t? Is there a noticeable difference in their learning skills? Are they more competent when it comes down to it?

What is the reason behind Duolingo’s chart-topping status? Perhaps it’s the fact that it’s the first language learning app that is getting serious traction. Its methodology is far from disruptive, its speech recognition is weak and the objectives of the company itself are far from promoting effective learning, so it must be the fact that it’s free, fun and finger-pleasingly well designed.