From zero to 500,000 users: 6 lessons from building online Spanish courses

We started Spanish Obsessed around four years ago with no ideas about a) what we were building; b) where we were going; and c) how we were going to do it. Despite this, we’ve grown and nurtured our humble passion for teaching Spanish from nothing into multiple podcasts, Spanish series and resources (both premium and free) which attract over 20,000 people from around the world each week. In this article, we want to share the key concepts that, were we to start again, we would want to know. But first, a little background… 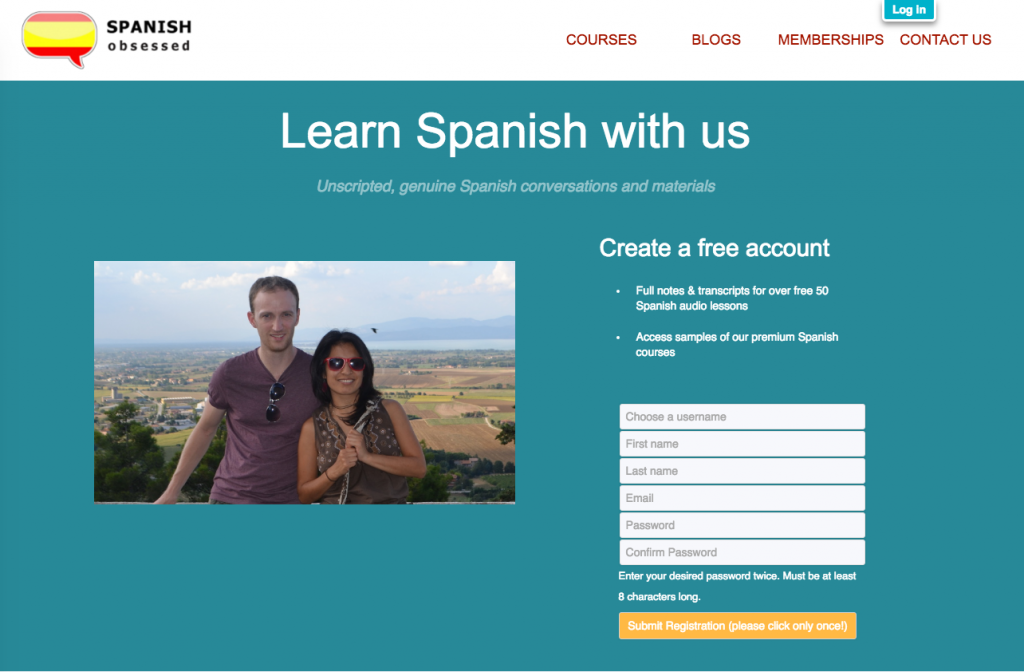 Spanish Obsessed was born from a love of Spanish language and culture, and a desire to share that with the world. We are a Brit (Rob), and a Colombian (Lis). I (Rob) learned Spanish and spent several years in Latin America and Spain teaching English, and when I returned to London I spent some time working in marketing. Add Lis, and we had all the ingredients to create and promote some engaging and authentic Spanish resources. We started out by recording podcasts and writing a few articles, and over time grew our offering and audience to what it is today. Here’s what we learned along the way – if you are considering building out your own online resources, we hope you can learn from our mistakes:

1. Things take five times as long as you think

Not two times, nor even three. We found that, when we project planned various courses, the actual time vs planned time was literally five times as much. Why? Life gets in the way, and between us it was often difficult to create the ideal working conditions to make good progress. We also took everything on ourselves, from planning the courses, to recording, editing, designing and building the website, to marketing, outreaching – the list goes on. While we are much more efficient now than when we started, we still budget in a ridiculous amount of additional time when we project plan. Although we enjoyed the learning process and learned a lot of new skills, we found out something very important early on…

2. Use your strengths. Get someone else to do what you’re bad at

We love planning courses, writing learning materials, and recording our conversations, and we think we’re pretty good at it. However, we didn’t know much about creating videos, graphic design, or server side coding. Again, we have learned a lot about this (and are very happy that we did). But, as we grow, we can’t keep doing everything ourselves. We’re starting to call in favours, find freelancers (using Upwork, for example) for those jobs that we can’t or won’t do ourselves. This frees us up to do more of what we’re good at.

When you enjoy something and do it well, you will spend your time efficiently and productively, and have something great to show for it. When you don’t like something and do it badly, the opposite applies – you waste your time learning the basics, and spend a long time creating something inferior. Someone more qualified could have produced something better, more quickly.

Muddling through things is a great way to pick up new skills, but when time is limited and you have a lot to do and places to go, it may be worth bringing in some additional support.

3. Find a balance between “just ship it” and perfectionism

Originally a software development mantra, “just ship it” was the philosophy designed to get products developed, shipped, and into customers’ hands as quickly as possible so as to gain initial feedback. This is a handy way of avoiding “perfection paralysis”, where products would be tweaked for such a long time that the release would be delayed, enabling nimbler competitors to swoop in and claim their customer base.

We have been guilty of both of these two extremes. We found the “just ship it” mentality leads to sloppy materials and a poor learner experience, whereas perfectionism would mean taking too long to get to market (see point one). There’s nothing more disheartening than spending months on a project, only for it to flop when it’s finally released.

We have managed to find a happy medium between a minimum level of perfectionism, but also getting what we produce out into the wilderness in a reasonable timeframe. Which leads us smoothly on to point four…

4. Move and iterate in small increments

When we created our Spanish pronunciation course (a premium course, designed to help learners of any level perfect their Spanish accent), we spent months planning, writing, recording, editing, and uploading our material before launching. The launch was moderately successful, but if we had known about user feedback from the earliest stages of writing we could have created something much stronger, more quickly, and probably would have had a more successful launch. Lesson learned. Now, when we create courses, we release one or two modules, and quickly gather user feedback. This creates a nice iterative “loop”, again beloved in software development circles:

Rather than spending months working through one cycle and hoping for the best come launch time, it’s better to plan small increments (to “iterate”), and gather feedback around what does and doesn’t work. If you produce something terrible, it’s better to find out as soon as possible, rather than plough 1 month (or 5 months – see the 5x rule in point one!) into it. Which means we need to set our egos aside, as we explore in point 5.

Your ideas are, quite literally, only as good as you think they are. We’ve had lots of ideas, and at first we thought they were all pretty good. It’s only when you put them out there in front of people that you can really see what’s going to float. We are learning to put aside our egos and really listen to what resonates with our users. It’s worth remembering that an idea on its own is worthless – it’s only in its successful execution that an idea has any value. Given that we typically spend 1% of our time “ideating”, vs 99% executing, we are happy to twist rather than stick on the majority of our ideas. Which brings us neatly to our final point.

Given that ideas are cheap and plentiful (see point 5), things take longer than you think (point 1), and that you should be moving and testing in small stages (point 4), it follows that you should always be ready to abandon or change your projects at almost any stage. Startups call this the “pivot”, and there can be varying degrees of pivot. You may find that you need to tweak a small part of your offering following initial user feedback, or it may be that you need to go back to the drawing board entirely.

We’ve learned to find our key metrics (how “sticky” the pages are – time on site, pages/visit, etc), which are pretty good initial indicators for how our material is going to perform when we scale it out. When we create new material, we check on some initial metrics, and see how these compare to site average. We also run “beta” tests for a section of our subscribers to see how they react to what we publish. If we get great feedback and people are spending quality time using our materials, we know we’re on to something and should push ahead. If not, we’ll “pivot”, and start building out some other ideas – it’s really as simple and effective as that.

We try to stick to these guidelines as often as we can, and hopefully if you are considering creating learning materials, or already have established something, they will help you save time and be more successful. It’s by no means a definitive list, but through our experience these have proven to be the key areas to focus on. However, we’d love to hear any additional thoughts – let us know in the comments below!

Rob Ashby is the founder of Spanish Obsessed, a website dedicated to helping people learn Spanish. With his Colombian partner Lis, he has created a range of audio and written courses for a variety of levels, and the website has been featured in the Guardian and recommended by many universities, including Oxford and Durham. He was also a speaker at Innovate ELT, where he gave a talk of the same topic.

1 thought on “From zero to 500,000 users: 6 lessons from building online Spanish courses”