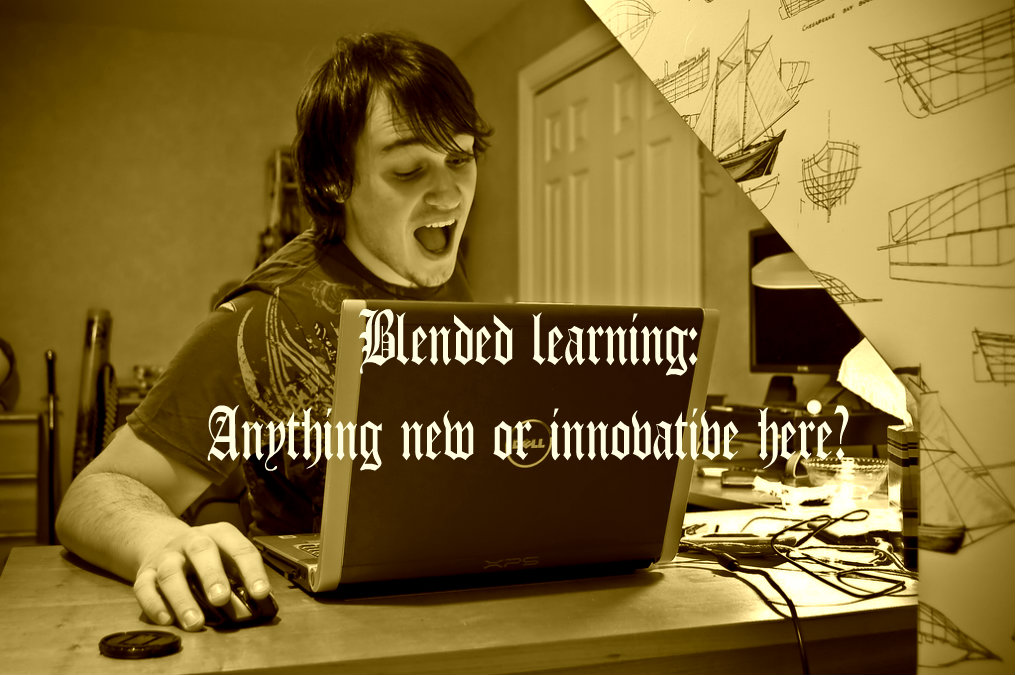 At ELTjam, we’re always interested in hearing from teachers working with technology at the coal face.  In this post, UK-based teacher and CELTA trainer, Sam Shepherd, reflects on the case for and against blended learning.

However, distance learning by correspondence and homework are, in themselves, not necessarily bad things. Lots of people have successfully learned by distance learning, and a lot of people have benefitted from homework. All blended learning does is take these perfectly serviceable ideas and chuck them on a web server. What you end up with is the usual ‘it’s innovative’ cry that gets attached to doing stuff on a computer.

Send them by text?

It takes me onto thoughts of SAMR. Essentially, this is the idea that technology use in education goes through distinct stages:

There’s a neat definition on this site, with some neat videos. Although the Google Drive example is probably not the best example, it is the easiest to explain.

So far so clever.

It seems to suggest a link with Bloom’s Taxonomy, and you can tell that whoever thought of it clearly had the ideas first and the name second, because it hardly trips off the tongue. It’s a nice idea too, and one which should encourage us to experiment with technology more, and think about the effect it has.

However, I have to be honest and say that my initial reaction was annoyance. This might have partly been a knee jerk reaction to educational initialisms and acronyms. But there was more to it than that. Like Bloom’s taxonomy as it was originally stated, SAMR seems to suggest a hierarchy of changes, where the SA stuff is somehow perceived as less valuable than the MR sections, much like the idea when discussing Bloom that somehow having knowledge is less valuable than being able to synthesise and evaluate. Bloom, happily, is being presented more frequently as a wheel rather than a pyramid, although the divisive hierarchical notions of ‘higher order’ and ‘lower order’ thinking persist.

However, it occurred to me that I was reading SAMR wrong. It’s not meant as a goad or an encouragement. Modification and Redefinition are not intended to be taken as better than Substitution or Augmentation, indeed the whole concept doesn’t necessarily suggest that using the technology is better than not using it

Is there a cognitive or learning benefit to the application of technology? That’s the real question.

Is there a benefit to the technologicalisation of the distance learning model?

I think there is. Having the learning materials quite literally to hand at all times through your mobile devices could be a benefit to some learners. Technology lends itself to easily available multimedia. Rather than films on TV restricted to weird times of the day, you can have films on demand. You can have instant feedback on certain types of task, collaboration with people all over the world and so on. Indeed, the breadth of reach and relative cheapness of digital technology means that some elements might run which might otherwise not.

Whether students engage with this sort of thing is a whole other question. Even with monitored assessment in the form of quizzes and so on, the temptation, unless it’s absolutely fascinating, and the student 100% motivated, is to try to work out how to game the system. I know that’s what I have done for every bit of mandatory online training ever. I usually start with the final assessment task, then look up (or simply Google) the bits I can’t work out, rather than actually engage with every single piece of  online training. I suspect that this doesn’t lead to brilliant learning, but I do think that a clever online learning designer would take this tendency/temptation into account. Sadly, they don’t seem to have done this yet.

And the closely linked homework model?

A web link to an interactive task which can be done on the bus or during a break, quick written feedback on digitally submitted writing (even by email!), the flexibility of being able to do homework without needing a piece of paper, the (for some) added motivation of a bit of whizzy graphics, quick right/wrong feedback on a quiz so that students can think about where and why they made mistakes before coming into class. Crikey yes.

The other question to ask, however, is:

Are either of these models actually better than a 100% face to face learning?

My gut feeling, and my belief, is that they aren’t.

For me, face to face learning trumps any kind of online learning simply because of the speed, ease and naturalness of the classroom interactions, although homework can be used to augment that process. Any idea that blended learning is better is often based around assumptions that classrooms are places where teachers stand and talk at, or demonstrate to, students and students absorb, perhaps with a bit of questioning. My own classroom practices as an ESOL teacher aren’t based on this. Rather, they are based on notions of enabling and promoting spoken interaction, of discussion and questioning. For me, the technology simply cannot replace that. Not yet, and maybe not ever.

Sam Shepherd is a teacher and CELTA trainer working in the UK. He is particularly interested in teaching migrants, teacher development, technology and would happily write for hours on pretty much any aspect of ELT. He can usually be found doing this on his blog.