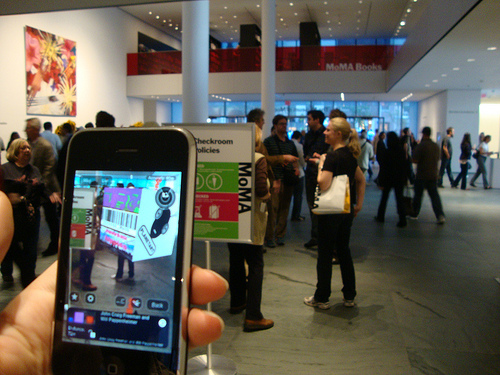 Augmented Reality: The Edtech From Way Out

The closer we get to the year 2015, the less certain I am that I’ll actually be able to purchase a hoverboard with which to zoom around town. Although the tech-laden utopia of Back To The Future Part 2  has been celebrated for its prescient creativity (check out Kristina Lucarelli’s post on Gawker.com for some fascinating comparisons), I’ve come to realise that there comes a time when I have to manage my own sci-fi-fuelled expectations.

In fact, the progression of tech development seems to have reached a familiar pattern ; as if we’ve all settled in to the rhythm and pace of advancement to the extent that new releases in the world of tech – albeit impressive – no longer really seem to be that mind-blowingly awesome, just kind of expected. You can talk to your iPhone now? Sounds about right. When it comes to Edtech in particular it’s sometimes difficult to get really pumped about something.

The area of Augmented Reality (AR), however, is imbued with that hoverboard-esque air of wonderment. The AR demonstration I saw at the Frankfurt Bookfair last year was most definitely one of the more ‘outstanding’ moments of the event. AR enables people to integrate digital content and printed material, geographic locations and objects. The ‘trigger’ no longer needs to be those fuzzy QR codes, but can be an object of information itself. Then, by using the camera on a smart device or tablet, viewers can scan the coded object and the digital content will appear. The digital content could be a simple link to a website, a video, a 3D model or any other supported content. At the demonstration I took part in I scanned an actual printer and watched in awe as a 3D video representation of the machine appeared and showed me how to change the toner cartridge. OK… sounds banal, but when you’re able to walk around this content, get close and pause/play it, the distinction between the reality on the screen and the reality we actually inhabit gets truly blurred.

AR’s ability to integrate both real world and virtual content makes it a fascinating proposition when it comes to EdTech. Judy Bloxham in her article on AR for The Guardian mentions some of the applications of the tech in HE institutions. These range from AR compatible prospectuses, immersive GPS-triggered ‘health walks’ that enable the learner to discover the health risks in their local area, to bricklaying instructional videos for trainee builders.

It’s AR’s ability to immerse the learner in a real world context that makes it an ideal tool for language learning technology, however.

It’s not surprising that Pearson are already on it. Their in-house Future Technologies Group has teamed up with BBC Active, Dorling Kindersley and Wikitude to explore the language learning potential of the technology. The result is a prototype for an Augmented Reality phrase book called LangAR.

LangAR is a phrasebook designed to find the right phrases in the right context more easily through the use of AR. Given the assumption that a language learner picks up more of the language when they are immersed in the country where it is spoken, the app converts your surroundings into the language of your choice. Your bakery at home gets turned into a panadería, for example. As well as straight forward translation, LangAR can provide the learner with the most common phrases for the specific place they are.

That has to be one of the most attractive prospects of AR as a learning tool; wherever the learner is, there is a learning opportunity. They will be able to respond to their linguistic needs themselves and immediately. We might see the demise of “Just In Case” teaching (that bombards the learners with unit after unit of content in the vain hope that is might be useful someday) and the ascension of “Just In Time” learning whereby the learner identifies what they need because they are presented with a real and tangible occasion to use it.

That, for me,  is the hoverboard; the sheer learning potential that such a technology could unlock. It’s not more of the same but on a different platform; it offers the opportunity for a genuinely new paradigm in learning. Will it ever get off the ground?