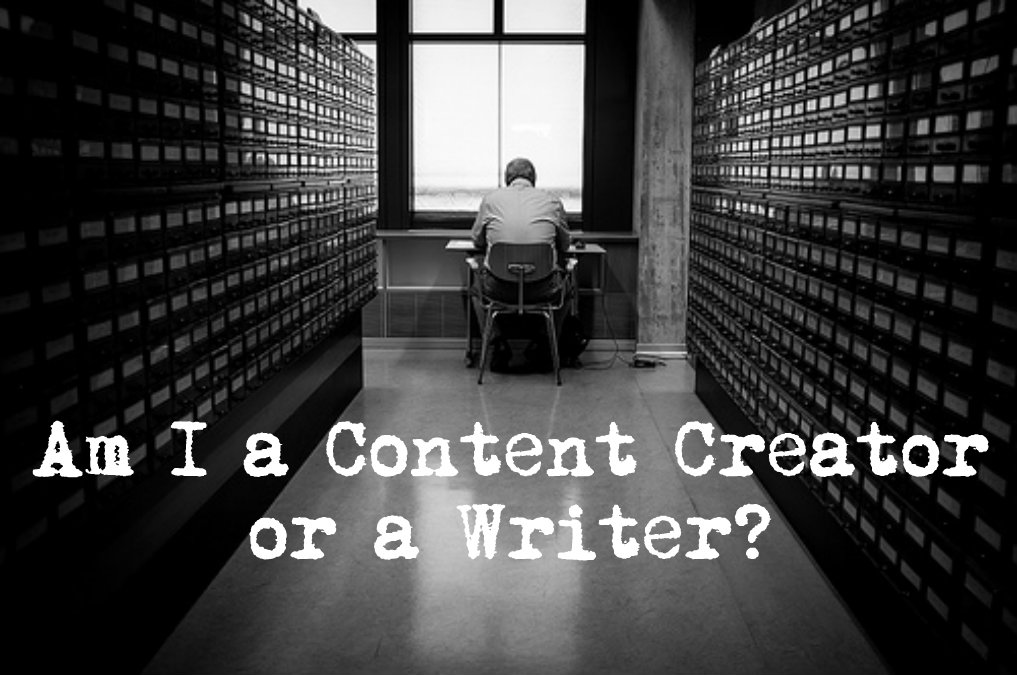 My friend’s dad gave her some advice once that I took to heart.

I always agreed so what I’m about to say seems like a contradiction.

I don’t see the problem with being called, or hired as, a Content Creator if that’s what the job requires.

In a post on ELT buzzwords, I included Content Creator as it was one I sensed was causing resentment among materials writers. It passed without much kerfuffle until someone suggested Content Creators shouldn’t expect royalties because they don’t originate the ideas behind course books anymore. In fact, it mostly echoes what Scott Thornbury wrote in his post about the myth of creativity in course book writing which seemed, at least in part, to have sprung from a post I wrote about the importance of royalties.

I’ve since changed my mind about royalties.

I think they’re a privilege-in-disguise blip that allowed publishers to strip writers of the thing they actually should care about – their copyright. In return for a small percentage of the income generated from sales, you give up all rights to that work.

If the publisher fails to make a success of marketing that work, or shelves it completely, or decides to give it away for free or at discounted prices, that carrot dangling in front of you shrinks to nothing. You’ll be lucky to earn out your advance in even the best of cases, so it in effect becomes a fee – one that is too low for the work and hours you put in.

Royalties are like lottery tickets. Out of the hope it could be YOU who gets to live off one huge selling work, or many moderately selling works, you give up all rational perspective on the odds of that happening and all future ability to make money off it in other ways.

What a skilful sleight of hand. Look over there while I make your money disappear over here. The publishers must be thrilled so much energy is being directed by writers into fighting for a system that enslaves them. Not only that, they can get you out on the road promoting for free for them and doing their social media for them because it’s a royalties package. I can’t believe I fell for it!

Typically short form fiction or journalistic pieces (with bylines) have contracts with varying degrees of rights signed over. Perhaps you give away first publication rights only, or the rights to a certain regional market, or exclusive rights forever and so on. Different publications have different rules and reselling work – whether by repurposing the material or selling it elsewhere – is how many writers manage to make a living off their work.

I see fiction and journalism as very clearly Writing. I ask myself, in my relatively short career as a writer, how much of my work has been what I would term Content Creation?

It turns out to be most of it.

I started off as a Content Creator in ELT writing quizzes for the BBC Learning English site. They didn’t have my name on and I’d struggle even now to pick out the ones that were mine even though it took no small amount of skill to come up with topics and create meaningful questions. I felt I was paid a fair amount for the work involved and I never thought about them again.

I started off as a Writer with Time Out Istanbul doing restaurant reviews and articles, mainly but not exclusviely, about food. Apart from two articles that were info gathering and one review that was for a paying advertiser in the magazine and which I had to fake because the food had been so bad, those pieces ring loud and clear with my voice.

Continuing in the Content Creating vein, I’ve done a digital YL thing, some reading texts for course books, study questions in my own Graded Readers and Study Skills book, some Social Science workbook material and a mostly info gathering piece for EL Gazette.

As a Writer, I’ve written two Graded Readers (and a third that has been shelved but I hope sees light one day), the themes and dialogues for the Study Skills book, a novel and a couple of articles for online magazines outside ELT. My biggest outlet for Writing is probably blogs, this one and two others.

Forgetting about how those are paid as they have been a mix of royalties and fees, fair and unfair, the contrast in the nature of the work is obvious.

Writing is freedom, imagination, creative flow, work that “belongs” to me and no-one else could have come up with; the finished product is something I want on display in my house and I’d be upset if someone went and rewrote it without my knowledge. If I have to do rewrites, it’s because the material isn’t living up to the promise of the original concept or idea and I’ll want them doing as much as any editor will and not expect to be paid more for the work.

Content Creation is more of a (creative) problem solving exercise. Briefs are tight, or annoyingly loose, but still parameters are set by someone else or by the requirements of the project itself which may dictate the type of material, and even the idea itself. Editors can do whatever they like to it after I submit it, it probably won’t carry my name and I wouldn’t lay claim to it anywhere other than Linked In. If I have to do rewrites it is because I didn’t meet the brief or the requirements and, where that was not foreseeable, I expect to be paid more for the extra work.

In those jobs above – which ones demanded more actual skills and training?

The Content Creation assignments without a doubt. It’s not even about enjoyment – I am hating writing my second novel but quite enjoyed the quizzes and workbook – nor is it about how difficult the work is.

I think materials writers who don’t want to use the term Content Creator are doing themselves a disservice. In ELT a lot of materials writing is more like copywriting than anything else. Now that’s a skill and has its own qualification. I wonder how well it’s paid. If it’s better than ELT writing, maybe it’s time to start demanding the same rate.

True creative writing is an innate ability. You get it through luck and, though you might work hard to polish and perfect, you can’t learn or train it. The skills needed to create effective content are varied and honed over years and, as such, need to be paid at  a rate that reflects the hours put in and the expertise needed.

Demand that rate and don’t be sucked into taking a gamble on a product you didn’t have the idea for. Let the publisher, whose idea it was, take the fall in the likely event that it doesn’t succeed. When the creative flow and the idea is yours, then consider taking a gamble on it but fight over the copyright.

It matters what you call your job.

Nicola Prentis has a BA in Philosophy, a lifelong pedantry over the English language, an MA in ELT and a CV that spans about ten different countries. She writes Graded Readers for Language Learners (The Tomorrow Mirror, 2013 & As Others See Us coming in 2014). She has written texts for course books but has her own Self Study book – Speaking Skills with Harper Collins that was published in 2014. She blogs regularly on her site Simply English.