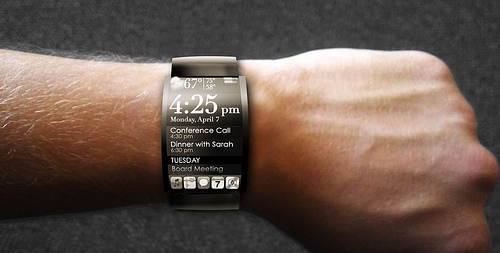 A new report from ABI Research predicts that over a million smartwatches will be sold in 2013. Forget (for now) that apart from the Kickstarter phenomenon, Pebble, there aren’t really any available yet. What would really change the landscape would be if Apple’s rumoured iWatch does actually make an appearance. You never know, but it does seem likely. Apple seem to be on a downer at the moment, and they need a new disruptive and category-defining product. They must also be looking over their shoulders, now that Samsung have confirmed that they are working on a smartwatch, the Altius. And Microsoft – although I don’t think Apple would be as worried about that particular threat.

This all fits in with the general trend towards wearable technology, exemplified by Google Glass (which is, after all, a real live product).

If you’re struggling to see the point of a smartwatch, Gizmodo and their readers have some thoughts here. Basically, there are things a smartwatch could do better and more conveniently than a smartphone. To-do lists, reminders, voice-activated searches, booking a restaurant (think Siri, but better) – all without the faff of having to get your phone out of your pocket. Oh, and umm… seeing what time it is, of course. Nearly forgot that.

As with smartphones pre-2007, though, it’s hard to predict what amazing things developers will think of to do with these devices once the platform is available to them. And that surely applies to language learning as much as anything else. At the most basic level, you could see it working well for ‘phrase of the day’ type uses, vocab learning flashcards and simple games. But that would just be the start.